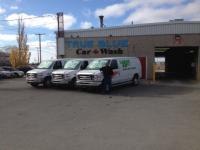 Reservation made Jan 4,2021 for Jan 9th. Realized I may have to go to different location in Winnipeg to pick up the 15 ft truck. Got a text the evening before saying I had to go to Altona Manitoba to pick up the truck. Made no sense but when I called the number in the text he was adamant that was where I had to go and he could do nothing about it. Moving from Winnipeg to Brandon so driving 2 and half hours to pick up in Altona didn't make a lot of sense. I quickly went down to the Pembina location and after a few phone calls was sorted out. They seem very disorganized. Also paid to rent 2 dozen moving blankets and received 1 dozen. When I phoned back the girl said they would look after the difference and refund and she would make a note on my file and to mention when I dropped off.Nothing happened from this end insofar as a refund. Would not deal with this company again.

The van I reserved had trash in it, was covered in a ton of dirt, had missing letters in its identification stickers, and was physically stuck in its parking spot, unable to be driven out. They had to provide another vehicle.

The 10 ft truck tires had little to no tread left. It was a very frustrating experience to move the truck from where it was parked. It took me 15 minutes in 10 inches of slushy deep snow, that wasn't shoveled, to finally get loose. These tires are dangerous, and obviously the owner believes this to be a normal situation.

The personnel was kind and helpful but as for the vehicle, there was no windshield wiper fluid in the vehicle which proved to be dangerous on the slushy wet day that it was.

Not much really. Service is very professional.

When I picked up the truck there was garbage all around the truck on the ground outside. The truck was dirty on the outside. But that did not prepare me for the inside. When I opened the driver door I was shocked. The floor was filthy, the seats looked like they had not ever been wiped. There was food and cigarette butts and garbage wrappers on the floor and a piece of packaging that whoever rented the truck last melted by flame was left on the dash. And there was garbage behind the driver seat mud on passenger door. The real kicker was a used needle in the cup holder closest to the passenger seat. I was mad. I went back in to talk to the man who issued the truck to me. He did not have any other trucks. He came out with a spray bottle and cloth. He wiped the steering wheel and part of the cup holder. He took the used needle away with him. He told Me the truck had been STOLEN and only came back 2 days ago. So I asked if the truck had been inspected. He said yes yes. I had people at my place waiting for me to arrive with a truck to load for our move so I couldn't cancel. So I left with the truck. When I got home I opened the back cargo part it looked ok until I walked up to the moms attic. And on the floor was white round drugs. I am not impressed. I wiped down the driver side in the cab for when it was loaded and I had to sit in there. I did not remove the garbage or the broken snow scraper. Both parts were still there. ALSO there was a garage remote and a set of keys for a white SUV in the glove box. We did our move. I returned the truck and told the same man who issued the truck, that it was not acceptable to receive it the way I did and I didn't want to pay for this. I hope you can see my frustration. I would love to email you all the pictures I took. Please contact me so I can do that. I rent UHAUL's often and have never experienced such a dirty vehicle. I was also told that the Tru Blue car wash was not authorized to refund that I need to contact you at the head office. I did ask for the police report number so I could follow up with the police seeing that I cleaned out several drugs from the back cargo area incase they needed them for evidence. But I think they would collect their own evidence if it was really stolen. Please call me or email me. 204-746-0024. Thank you. Cheryl

Upon picking up my rental, it was extremely dirty. The exterior was caked in mud, including the wheel wells, rims, axels, and breaks. Once the trailer was loaded it was extremely easy to tell the hubs/bearings were completely shot. I called road side assistance who arrange to have me bring it in the next morning to a service Centre. Upon bringing the trailer to the service centre they manager looked at the trailer and informed me the breaks, hubs, rims, tires, and light wiring needed to be replaced. The service provided at the service centre was very good and was the only positive experience of this process! However I was still very disappointed that the trailer was In such a poor conditions upon picking it up. If I did not have experience with trailers and tried to make my 2000km drive with this trailer it is highly likely I would have been stranded in the middle of no where with this mechanical unsafe trailer. Overall I was extremely disappointed a trailer of this condition would be given to a customer and it is clear service providers do not do appropriate safety/mechanical inspections of your equipment. You can look in to the service records of this unit yourself and see the work that was required for it be mechanical safe.

First of all, we were not told that there is different prices for weekends. When I enquired over the phone for pick up on Friday I was told it's $0.89 per km for whichever lms you drive. Then, I came to know that when you drive more than 500 lms. You get a straight charge. I drove 317 miles which is 592kms. And I was charged as per lms driven. Really bad experience. Hoping for refund.

There was no available lashing to secure the item or cargo

I don't think it is fair when I pay the deposit of $60 and it doesn't get returned to me the same day I returned the trailer. And I have to wait 4-6 weeks for you to mail my deposit back to me.

Thank you for the quick service

The staff was helpful but... there was not the proper equipment to take the trailer off the truck so we had to use a make-shift dolly. It worked but it could have been better.

Barely understood the thenguy working at the counter. Thick Arabic accent and I'm usually good with accents being an immigrant myself. Snow and ice covered windshield. No scraper

Terrible customer service. Gas tank only 1/4 full but if dont return it 1/4 full will get charged. This is unfortunate as it takes time out of the rental time.

The Gas tank should be toped up not 3/4 of tank on the pick up day. Why? Because on dropping of is difficult to refuel accurately up to 3/4 tank. That's why I put 7/8 of tank that is 1/8 of tank more than I used.

Mileage on truck more and in contract pepper 7 miles less. In fuel tank level showing in pepper halfway but actually below half. Two months ago I rented and they changed $15 for fuel next day. I call them I already put gas And I have receipt but they say another employee did this so I can't help you. So this time I checked miles and fuel tank both are wrong so technically they need extra money from every customer. Even after finishing my trip I asked for receipt they told me you are getting in email. So it's tricky not telling how much actual charge a Free finish trip. You are getting by email and you don't have time for argue For $10 /$15. So I found this location doing cheat. Try to send your company man for rent and you realized I am right.

Confusing as they told me this is the wrong location even listed in the paper.. he claims the system doesn't show the order.. not sure where the problem..

No conceivable improvement could be made.

The cab of the truck was not cleaned out, there were items from the previous owner still in the cab. The interior was filthy and the windshield was very dirty, bordering on unsafe to drive in sunny conditions. The attendant didn't know that a cart was already in the back of the truck and instructed me to take one from the "collection".

Ensure male employee wears a mask. Was a small office and male employee not wearing mask during Covid restrictions. â€œMaskâ€ sign clearly visible on doorway to office, although employee chose not to wear ????