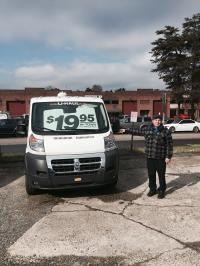 The office opened a half hour late, not only that but I was not aware when I rented the truck that I would have to pick it up somewhere other than Port Royal location. Out storage unit was in Springfield and the extra time spent getting the truck really hurt our ability to move safely. The movers had to rush and unload in one day instead of having two days as planned and so now everything is in a pile in the basement instead of being placed in the rooms where it belongs. The gentleman at Afford was very nice but I was not happy with the experience this time due to the delay. U-haul has always been good to deal with but if I had known ahead of time about the pick up time and location I would have done things differently. Thanks for the beautiful clean truck though, it did the job all in one load. Happy New Year!

The trailer was left at a drop lot that was unattended. The online process had issues with identifying the location service and completing the check in process.

They got me in & out pronto

Had very bad experience with U-Haul Neighborhood Dealer, 11410 N Shore Dr, Reston, VA 20190. Reservation was 8/22, but for some reasons, the order was totally messed up, therefore, the reservation was cancelled when pick up, that was not professional way on handling business and not acceptable in any way. I learned a new definition of U-Haul reservation, which is not hold accountable at all.

The personnel were very helpful, but the location could be hard for some to drive into.

Terrible place to drop off truck. Had to wait 30 minutes for attendant to return from where noone knew or could they speak English. Will NEVER use this business location again.

Nobody in the office and had to wait.

Car repair shop. The mechanism said boss is not here. No way to contact boss. Could not properly drop off equipment with documentation or receipt

The guy running this is super creepy. He came out with his belt half off, half putting it on like his pants were off. He didn't want me to use the uhaul app but to use his system for checking in and payment. Took phone calls in the middle of talking to me. Stood really close during a global pandemic. 100% will never, ever use this service again and will warn everyone I can to stay far, far away from this creepy, sketchy guy.

I had originally reserved to a different location before last minute they transferred me to this location . I did early check in but nothing worked as I got there . So I had to go in .. the guy took so long . Was a little frustrated ! Didn't know I had a hold deposit either .

I was charged a cleaning fee even though I returned the truck clean with pictures for proof. Had to spend 40min on the phone with uhaul customer service to deal with that. Might be better not to deal with this particular subcontractor if you need to return the truck after hours (when the office is closed).

I returned the van 4:30pm. My receipt says I returned it at 7:20pm. When I returned the van the man who originally gave me the keys took a look around the van and said I should've swept the inside of the van. I told him I would sweep it (even though the van was clean.) He said that it was too late and that he wouldn't charge me the full cleaning fee. I suspected this was a trick he used to increase rental fees. I did not protest because I was in a hurry to leave. I was afraid of catching or spreading the coronavirus and he was coughing without covering his mouth. I was happy that the location was near me but I will never go there again.

The issue was more with the U-Haul app that made it much harder to obtain the vehicle, and would have just been easier getting it all done at the facility. Further the COVID outbreak made it much more difficult to get the vehicle back in a proper manner. I hope U-Haul would consider a financial break on all those additional days the van went unused but could not be returned due to the mandatory lockdown protocol.

When I arrived door no one was in office or responded to calling out for assistance. Had to call number for the business (it was 10:30 AM). When phone rang on the counter 2 men from a back room came in to the office. As soon as turn in of trailer was completed, I left the building but went back immediately as I had a question. Door locked, no response to knocking.

Moses was exceptional. I tried to call the office several times in the hopes of letting his supervisor know how happy I was with his service.

Took a while to get the equipment which was scratched and dented. You changed the return location and we had to pay more mileage and gas to return it.

Poorly lit, not well marked, overcrowded lot, and no marked drop box. This is the worse uhaul location I have been to and would never use them if I had a choice.

Terrible place.Dirty , muddy, narrow space, Service was very lousy. Not helpful. I am not recommend to nobody.

There was no one at drop off place There phones on the contract did not answer . Apparently a different number given also did not answer . While all places have a right to conduct business as they deem fit , inconveniences can be avoided

This location was a secondary business for the owner who also runs an automotive repairs shop. Although he was very courteous and helpful once he could get to me, the lot he operates from is small and cluttered with other non U-haul vehicles making it hard to bet the trailer I was renting off the premises.

Running lights on trailer did not work and your employee said numerous times well they worked earlier. Do you want to take it or not?? There were no other trailers at this location and i made reservations well in advance. He was completely unprofessional and putting my life and other drivers on road at risk did not matter to him whatsoever. $376 total cost for sub par equipment is ridiculous! When I dropped off trailer in Gainesvillle i was told it would have been $46 from Gainesvillle to Fairfax!!