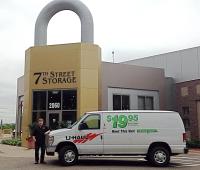 There's nothing bad to say about this location and the ladies here are so nice. I recommend going inside to get your equipment instead of going through online process. It's much faster and easier.

Drop off process very confusing. Sign indicated drop off in nearby location and to refer to the U-Haul app, but app did not provide code to access gated lot where key drop box was located BEHIND the dense. Instructions need to be much more clear for after hours drop off.

The ladies we worked with were just terrific!

They didn't have the truck we reserved. Was sent to another location. Got truck with no gas. Had to gas up to start and then return it after gassing up again. Everyone helping was postponed while getting things fixed. Will try larger center next time.

Absolutely perfect location for moms move. Close to where she lived. Thanks for the truck! Tricky getting in and out if gate-needed to put code in multiple times.

The location is a little hard to find becaue it is a smaller lot but the people were good and all went good.

The digital return process is very easy and quick!

The vehicle I was assigned had incorrect gas cap. The gas cap was yellow and required E85 Gasoline. I called the representative and they informed me to fill the vehicle up with regular gasoline instead of E85. Had I not called and verified the gasoline requirement for the vehicle, I probably would have followed the instructions on the gas cap and possible damaged the vehicle. This could be due to oversight on management or gross negligence from management. Furthermore, the receptionist and manager attitude's and customer service were subpar at best and degrading at worst. Through out my discussion with them, I had to introduce myself to receive assistance and when I did get it, I felt I was unheard. The agents would ask me what I needed and how they could assist me. As I answered the question, the agents would interject and carry on a conversation that had no relation to my comments or questions. As I tried to repeat myself, the agents would be more confrontational and I decided to not continue the dialogue. Overall, I felt unheard and unwanted. Thus, I do not recommend this neighbourhood location nor will seek their assistance for future rentals.

The easy checkout wasn't, when we got to the loading the pic of the mileage it wouldn't. The people at the office were nice.

The location and the truck were fine. The self-service app is a pain in the neck. If you had better hours (i.e. open until 5 or so) I would have dealt in person. The many steps on my phone were tedious. Photographing the returned van in the dark was a disaster, yet I couldn't leave until my photos were accepted. Hard to do on a cold, dark night in a parking lot!

The people here are awesome!

Staff were friendly, helpful, and easy to work with. It's been a long time since I rented a Uhaul van so was not used to doing so much via my phone but overall a positive experience. Great team to work with!

Easy to check in and returns love 24/7

Very friendly staff. I enjoyed our interaction and would gladly use their services again. It was a pleasant and easy experience.

Don't assume everyone has a smartphone. I was not able to access the address I was sent on my phone so I could not describe any damages I found when I picked up my truck.

7th Street Storage staff was terrific. 5 stars for 7th Street Storage!!!!! HOWEVER, UHaul staff at Como Avenue and on the phone have been less than! 0 Stars for them, which is why I rated this review as â€œpoor.â€ I requested Como Avenue only to be given 7th Street without my knowledge. The guy who called me after my reservation was made called me to tell me about contactless pickup. I was on a call and couldn't take it. I received a text and email, but because of what he said to me (contactless pickup), I was looking for information on how to do contactless pickup. Didn't even occur to me to look at the location change. Even when I called UHaul the day before, the rep didn't say anything about the change in location. I provided her with only my reservation number and she said that I would have no issues with picking up the truck at the counter at the Como Avenue location, never letting me know that that was not the actual pickup location. So I get to Como and they tell me I have to go to 7th Street, which isn't that nearby, especially as I had to drive to White Bear Lake, the opposite direction. And had movers waiting an hour for me there. Then Matt, the rep I just spoke with, is stingy about giving me a refund for 25 miles. Talk about salt on the wound. My moving day was lengthened by over an hour, and I had to pay the movers for one hour of time while they waited for me. UHaul gets 0 stars!!!! So I'd give UHaul 0 stars for this. Yup. 0.

Your online return process has failed me for my last two rentals. it's frustrating and I end up just leaving the keys in the drop box. Fortunately, this location takes care of the return quickly and correctly. "Failed" means I get to a spot in the process where I am supposed to submit a photo, I take the photo, "OK" it and the process stalls. I can't continue. I don't know if I can go back. I end up abandoning the process.

The operation runs very smoothly. There is not much to improve on.

I rented from the Uhaul office on West 7th Street in St. Paul. I was helped by a woman named Amy who was spectacular - she was kind- helpful and so gracious. Great Job Amy- thank you so much

The ladies were very professional and personable. :)

I will never rent from Uhaul again. I received a call and text the day before saying my pick up location had changed and I should call back to confirm. I called the number three times and no answer. I arrived at 7th street Storage for Uhaul pick up and the gate was open so I pulled in. I located the truck but was unable to get keys. I tried the app and checked all my emails, uploaded my phot and IDâ€¦again. I waited and waited I then called Uhaul and thankfully the guy was nice and understanding. He got me in contact with 7th St Storage , the woman was rude from the start. Her words â€œwell, your first mistake was following someone into our lotâ€. She continued to tell me the mistakes I had made without letting me explain to her that I never followed anyone into the lot, I pulled in because the gate was open. She made me feel like an idiot for not knowing the process of picking up at that location. I went through the online process of confirming pick up two times. She told me to come into the building to get my paper work, codes, keys. She continued telling me in person all the mistakes she thought I made without letting me explain the process I had already gone though. After getting all the codes for the lot and codes for the box truck I was then giving her my credit card during my â€œNo contactâ€ UHaul pick up. $130 + gas for 4 hours, YEP I SAID 4 HOURS. My first hour was just spent being belittled face to face during my â€œno contactâ€ pick up. It was an awful experience and a waste of my time and money, I'll never use Uhaul again.

Easy pick up and drop off. It was nice to have plenty of room for my car to be parked, and it was safe and secure.