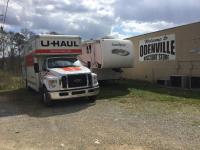 The U-Haul that's hooked to the store at Odenville discount .the cashier don't know nothing about what to do when a person comes to pick it up,a U haul. she has to call her boss they need to be more up-to-date know what they're doing and be able to help the customer which without making a bunch of phone calls to find out the information for you. But overall they did go out of their way to help me and the boss on the phone did help a lot.

The only issue I had was with the reservation, I called several days in advance and was told the cost for my rental would be $103.00, when I picked up the trailer I was charged $154.00. Did not have time to dispute before leaving.

It took over an hour for the person to get me serviced. The problem was only one person in the location and she was always starting and stopping the process by waiting on other customers buying beer and cigs

Train the employees! Also fix your online systems. It took over an hour due to having to wait for the employee to load the Beer cooler and take out the trash. The location was also a 1.5 hour round trip from my home

I felt like I was bothering the employees by doing business with them. They were rude and very UNhelpful. I am having second thoughts of even using uhaul ever again if this is how I will be treated by trying to use your product. I even heard one employee say they wanted to find another job so they didn't ever have to work with uhaul again. This was about as sorry of service I have ever seen. I was told if I didn't park the truck in the proper location I would be charged $50 extra for parking in the wrong place. Of course no one came out and showed me where to park. I parked the truck in the spot I picked it up from so I better not be charged extra. I would rate the product and service lower but you did not offer a way to pick zero.

There was confusion on how much it was and I already had done it online. Got two bags of furniture protectors one was open and I did not pull them out and count the way he counted it looked like it had six but only three was in it. There know way of folding and getting them back in bag right need to find a better way of renting them Other than that U-Haul trailer was great as always

The blinkers and break lights did not work.

Wasn't sure which lot to park the truck.

Was told by attendant that if I did not back the vehicle in, I would be charged an additional fifty dollars. Otherwise, the customer service was great.

The rental truck and process was exceptional, but the pickup and return of the key took a long timeâ€” over an hour wait to return the key and receive confirmation. Staff was very kind.

The store wasn't very well maintained...older location that wasn't as clean appearing as I would have preferred, particularly with the current covid-19 environment. The store clerk was nice enough and seemed knowledgeable of how to complete the transaction.

They only had one person doing the uhaul and the convenience store. It took forever. They really needed another person there.

The lady at the store was very rude with us, and ask us to wait like 10 min. Even tho bo body else was in store, then it cost me $259.00 for just a one day rental then when I retured it just one hour late I was charged for a second d day and took almost an hour to get it dropped off...I wouldn't refer Odenville discount store to anyone for a u haul rental.

You sent us out to the most inconvenient location after not telling us our reservation got moved. You guys are ridiculous. You overwhelmed a poor attendant to the point it took us an hour and a half to get our truck. There were people before us and I could hear your rep being a total jerk on the phone.

It took over an hour and a half to get the rental agreement complete. The system was suposively down. The lady at the location was helpful and nice but UHauls system is horrible. She tried calling the uhaul rep for the store and he wouldn't answer or call back. Absolutely ridiculous it took so long and then by the time I got to my house, my help had left. Doubtful I ever rent from UHaul ever again.

Check in and out was ridiculous

Train employee to use software. If kept at this location, there needs to be another employee. Everytime someone came in the gas station she stopped what she was doing and worked with them. It took over an hour to pick the truck up and 45 minutes to drop off. Never will use this location again and I will make sure anyone who asks me about where to get one knows not to use them.

Very friendly people @ this location. I would not recommend Uhaul mainly because of the extremely poor service in Dothan & the vehicles are gas guzzlers. In my opinion, Uhaul needs to update / upgrade to much more efficient diesel powered equipment.

Refused to give us U-Haul because the worker was tired. She said to go away and come back In 15m because She needed a break. Then we came back and she let 20+ customers in front of us so they could buy cigarettes. She said that she had been working 11h and couldn't handle U-Haul because she already did 5 that day. Also said the other customers were more important to jump in front of us because the store sales are first priority. We waited over an hour and a half and had people keep getting in front of us. The truck was nasty had dirt inside and also left over pizza boxes. Gross!! Don't know if we will go with U-Haul in the future; this is probably the 5th time we've rented a truck and worst experience.Finally another worker came to the store and neither of the two knew how to work the U-Haul website so I had to assist with their iPad (which was dead and had to be put on charge as well as they had the iPad upside down.) totally incompetent.

The two women, especially the one coming on, were sassy and condescending. I will never deal with these folks again. Never...