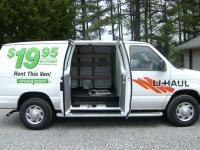 EXCELLENT. Truck had strong bleach smell, but that means they are taking covid seriously so that's a +. Staff was friendly, personable & most of all professional and willing to work with customers. Will recommend and return.

Service was good on phone and day of pick up. Returning truck next at 10:00 office was closed no one around to help return truck I was willing to pay the convenience fee to have you guys return truck but no one came. I did the self return but got stuck on entering the mileage as I later learned I had to enter a zero at the end of the numbers that's was 30 minutes later and the store was still closed. I finally was able to complete the return 45 minutes later the store was still closed. Several people drove up wanting to Rent truck but store was closed. Location was convenient but probably use another location next time.

I was supposed to have picked up a truck at 9:00 at the Washington rd. Location when I got there the truck was not there. I was sent to stonewall tell to pick up a truck at 11:00. There was no one available there to talk with me. I drove back to Washington rd. Then I was sent to headland location. Not please that I spent so much time looking for a truck I had made reservations for. Will not use again.

AWESOME AWESOME AWESOME! I was referred to this location after waiting 40 minutes at another location just to tell me they didn't have a truck for me. Once I arrived here I was greeted immediately with a warm smile and he went over and beyond to make sure I had a truck to use! Thank you so very much.

The customer service from the owner at Greenbriar self storage went above and beyond to make everything perfect! He was Awesome!!!!!!

Mike Herring was extremely helpful with this transaction. I appreciate his superior customer service skills.

Make sure key pick up box can open, so it wouldn't delay customer day

Have a better attitude and be helpful!

The guy was very helpful but it seemed that my miles jumped up every minute and a half. In the beginning I was at 5730 I rode around the corner to Washington Rd I was at 5738 a less than five minute ride and I used that many miles I just don't believe it

I was very impressed with the professional service I received when I rented from U-Haul.

I was given a reservation for this location but never called back from to confirm. Then when I called they said they didn't have both the truck and auto transport like I was originally told. The guy was rude and having conversations with other people in the background. He later told me to come in to get the truck, then stated the auto transport was still not functioning so he would still have to locate a location that carried it. I had literally drove through town to pick up equipment. The employee never walked me out to the trucks to check anything, just sent me across a huge parking lot to figure out which truck was mine and sent me on my. Oh and also without a receipt, wrote done the address of a third address ( in gain red marker)where to receive the transport. He never left his seat and was very rude at times. Mind you I was sent to this location from another U-Haul location(Old National Rd. Atlanta, Ga). This meant now I would be needing to now go to a third location to receive the final equipment needed for my move out of state. This has been one of my worst experiences ever.

Have this location open on Sundays.

We are new to Georgia, having recently relocated here from the Midwest. In the past, I've had a couple of negative experiences with U-Haul--including our trip here from Chicago, in which we rented a truck that broke down on us. Not even one complaint about Greenbriar Self Storage and UHaul however. And the manager, Mike, is wonderful. He seems to wear a lot of hats and somehow keeps the operation there running smoothly. He is kind, very helpful, and extremely understanding. He made sure our truck was clean and went outside himself to sweep and mop a truck that was, in my opinion, fairly clean already. That's professionalism. Thanks, Mike. We hope we don't have to move again anytime soon but, if we do, we'll be coming back to your location!

The manager at the Greenbriar location was very patient, kind, helpful & professional. The storage area was reasonably kept, but security could be improved upon, especially for women who may need to go check on their property by themselves. For customer convenience, this location should be available and open on Sundays, too! Thank you.

This experience was terrible. The person working at the location is not there for business hours. He did arrive at the time of my rental reservation. But the 10ft truck I reserved, he said I couldn't have because the battery was dead. He offered to send me to another nearby location or give me a discount on a 15ft truck. I said I would take the 15ft truck. I had only reserved the truck for 10am to 2pm. He extended it until 6pm. He checked me out, gave me keys to, supposedly, the truck parked in front of the location. I went to try to open the truck, the keys he gave me did not go to that truck. The truck was actually all the way across the parking lot. He also informed me that there was NO GAS AT ALL in the truck and I needed to go straight to the gas station. When I got in the correct truck, it indeed was COMPLETELY EMPTY OF FUEL. Luckily there was a gas station close by. He told me that if I brought it back on at least 1/4 full, I would get a credit. I did make it to the gas station, but I was terrified that it wouldn't make it. I had no issue with the truck itself. I did take advantage of the extended time, but I still didn't need to keep it until 6pm. I brought the truck back roughly around 4pm. The guy at the location was nowhere to be found. I ended up doing the return on my phone, but I didn't know what to do with the keys, as there was no one to hand them to. I called the Uhaul 1-800 number and was told to look for a drop box outside. I did locate the box but it was not in front of the place I rented the truck from, it was in front of the business NEXT DOOR. I will never rent a Uhaul from Greenbriar Public Storage on Headland Dr. in Atlanta GA EVER AGAIN. The rental was deeply discounted but the experience was extremely frustrating. I hated it, it was terrible.

Mike was very helpful and knowledgeable.