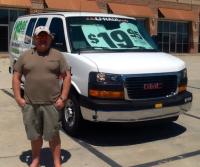 Great first experience with a â€œcontactlessâ€ rental. Everything was step by step and easy to follow.

I really feel I should be reimbursed. I was given a truck which the check engine light was on as well as the tires needing air. I had to do a move I have small kids I can't afford to risk using a moving truck with issues and yet I was given it anyways. I have pictures of it as well.

at first i was extremely disappointed with uhual; i selected one location that was closer to my home, bt they rerouted me to this location. The mileage increased bt thats fine. I like the easy pick up after hours system. At first we were extremely clueless bt after calling the uhual customer service they explained the lock box process and it went by smoothly. The only thing i would suggest is that they explain to customers the importance of using the uhual online website to speed up the process.

We went to pick up truck during business hours and they were closed. Very frustrating to say the least.

I found the representative very pleasant and no problem with the rental process. However, the vehicle was filthy. It was so bad that I would not allow my wife to ride in it. I also rented an appliance hand truck. I called the office when I was having trouble winding the crank for the support belt. The agent did not know how it worked and could not refer me to someone who did. There was not good lighting on the lot when I returned the vehicle to the lot.

I can't think of anything.

Make sure the tires are all full an have all equipment requested available....

No visible employees upon arrival. Sign on door directed me to another business (a 24 hour gym) and there was no one there either. Had I not had a moving crew waiting. I would have just left and went elsewhere. Apparently this is one of 10 side businesses that this U-Haul dealer is trying to run and U-Haul was not an important one. It took an hour to find an employee and pick up a trailer that was reserved. A PISS POOR OPERATION - NEVER AGAIN!!!!!!!!!

Have the vehicle cleaned out before renting it

The customer service was above all, (except that I was refused restroom access).

When I arrived during business hours, the location was not open. After waiting for a while, the employee finally showed up to open the location back up, with no apology provided. He was rude and did not perform a walk through, and he acted like I was putting him out to do his job. I received the wrong dollies. Because no walk through was performed, I didn't find out until I got home that the Uhaul was completely cockroach infested. I am now dealing with a cockroach infestation of all of my stuff due to the Uhaul equipment I received. I am highly unimpressed and will not use Uhaul in the future.

Higher two more people like the one I interacted with

When we got CEO was. there the Place was locked up and no one around. The phone number on the window didn't work.i called the 800 number from r advice,they said come back in the morning. As I was leaving the attendant showed up to accept my return.

I completed reservation online including payment. When I got to the facility, I was told there was a 40.00 charge to rent the trailer. I explained that we have used uhaul many times and the online price was never different than the â€œin storeâ€ price. I was tired and after a few mins just took the trailer and paid the money. I had a long drive to Va and needed to go. Turns out, he had charged me for insurance that I did not need and rejected during the online transaction. Had I known what he had done, would have gone some where else. He also changed my drop off location which was not what I wanted. He did connect the trailer in the rain so that was nice of him.

Attendant was very helpful, unlike the mentally challenged folks from the pick up location.

Truck lines a serious alignment. Very hard to make turns a d had to hold the steering will side ways to drive straight

Great customer service. Definitely would recommend this location to anyone.

Communication from Uhaul was poor. Info incorrect. Never heard that my 9:30 pickup not available. Local opened at 10 but truck not available until 11am. Local phone went to voice mail but mailbox full.

No improvement needed at this time

This location needs to accurately count mileage. I was told I went 72 miles and my calculation from my GPS shows 40 miles. I was charged and additional 44.00 for miles I didn't even use.