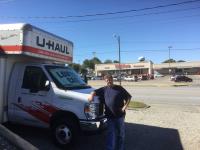 Make sure the vehicle is clean and safe to drive before signing it out to someone. The interior of the cab was dirty as was the bed. The passenger side wiper came apart before leaving the lot (in a rain/snow event). The dealer swapped that one out, but before going 4 miles outside Chillicothe the driver's side wiper came apart which I had to replace. The driver's side front tire only had 15 lbs of air which again I had to remedy. Not a good start to my moving experience.

Led lights inside box of truck

I was only able to pick up at this location after waiting at another pickup location where no one showed up. It wasn't the easiest experience but I blame it on covid. Would have been nice to have received a discount from U-Haul since I had to drive a number of miles to finally get the trailer I requested.

I have NUMEROUS reasons why this was a poor experience. 1. I was charged a wrongful drop off location fee of over $350, and all because they didn't give me specifics as to how the process works, and made them drive a whopping 60 miles to drive off their truck. 2. The online check in is different than the 24/7 check in, but I wasn't told that. The person who ran the store wasn't even present, and said he didn't want to come help me unless he HAD TO. 3. Because of the POOR check in process, I was almost 30 minutes late to where I needed to bring the truck. I was 4. The website and check in process as a whole is very difficult and confusing to navigate. 5. The customer service was EXTREMELY RUDE, and not at all helpful. 5. There were added charges I wasn't made aware of until I officially checked in. I will not be using this awful process again, and I will make sure any other person I come in contact with will know just how POOR of a business model this company is. So disappointing.

Wonderful! He called to let us know that the roads were getting slick and to be careful, not to rush. That was so kind of him! Will definitely be going back!!

Everything was reported as going well. Thank you for the support.

John was very helpful and able to deliver the truck even in extreme weather conditions. Will certainly use his location again.

nothing Jon was a great guy to deal with

Excellent service. We could not have been more pleased.

Never get reimbursed for using less than estimated mileage

I only said "NO" to the clean and maintained part because we started out at night and with the filthy windshield with all the bugs, it was very hard to see. Inside the truck was clean!. As for maintENANCE....the truck pulled to the left pretty hard making a 1350 mile trip fun!!!

I think y'all are excellent at false advertising. $29.95 for a rental... Ha, by the time you get done sticking it to people (who have no other options except to rent a truck or lose everything they own)... It's a $140. Which is crap. I rented a uhaul from Kansas city to same town for $136 (which was still horrible). However, Saturday we rented one, used half the mileage we did from KC trip and it's was more money. I hope I NEVER have to use another Uhaul again. They drive like crap! And are RIDICULOUSLY expensive!

He was great. Gave personal service and was nice to work with. Made me feel very valued. Need to supply him with many trucks as he was outstanding.

Jon, owner of Trader Jon was fantastc to work with. Could not of ask for better service. If renting in Chillicothe highly recommend Trader Jons.

We were thankful to be able to rent a uhaul for a great price but had gotten off to a later start in the day and could not postpone our plans to haul items. It was dark when we hauled and the trailer lights were malfunctioning the entire time.

Truck ran great from Missouri to California, only problem it poured down rain and the front window dripped on the seam on drivers side, other wise car trailer and truck was great

Just keep on with the awesome customer service at Trader Jon. They are absolutely awesome to work with and go above and beyond to make sure you are completely satisfied!!!

The only issue is that I originally booked the U-Haul online on June 27, 2018. I received my confirmation of the booking with the preferred location listed as I requested. When I never received any further communications from U-Haul, I decided to move forward and stopped by Trader Jon's to pick up the truck an hour earlier than requested on my booking. I am glad I did because he had no record of my booking through his location and when he called the main office for U-Haul, they told him that they actually needed me to pick up the truck in Brookfield, MO approximately 33 miles away as I listened over the speaker phone. The representative stated that U-Haul had attempted to text me and call me at the number provided which was not the truth because I had the phone with me at the time and showed Jon that there was no missed calls, voicemails or text messages from anyone at the U-Haul site. Luckily, Jon was able to contact the vendor at Brookfield and make arrangements to swap out trucks so I could go ahead and take Jon's last truck on site which matched my booking of the 15 foot truck. My suggestion would be this, IF U-Haul representatives attempts to contact the customer with absolutely no success, then maybe they should contact the customer by email, phone or text which ever they had not attempted and also notify the U-Haul vendor to alert them of the situation also.