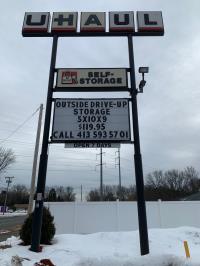 Everyone I dealt with was friendly and helpful. My rental experience was great

No improvement needed, I prefer utiling this office because the people that work there make you feel comfortable.

I was told I could return unused boxes, and the location refused to accept them. So I left them. Won't use Uhaul again.

I had a great experience renting a trailer at this location. I've recently installed a hitch on my Jeep and when I went to rent the trailer it wound fit.. my hitch it's to close to the tire, so this nice young gentlemen let me borrow his hitch receiver! I was extreamly appreciative of his kindness! Thank you so much for having great people working at this location.

Nick (your employee) is fantastic. He is very experienced with his job and is very responsible and knowledgeable. Uhaul should be proud to have Nick as a part of the team at U-Haul!

Dropped off after hours.

Everything was fine until the trailer was returned and the agent asked for it to be backed into a tight spot between two other trailers. With my mirrors covered in ice & salt and the parking lot being dark, I was going to park the trailer for him and take on the risk of bumping into a parked trailer. He then asked if he could drive my vehicle to park the trailer to which I refused and told him that I would drop the trailer off in the equipment return line. I told him that it wasn't my responsibility to park it where he wanted it on the lot....and he said it was. After telling him that I didn't have time to deal with this and that I would leave in front of the building, he developed a negative attitude and said to just leave it where it was in the middle of the parking lot.

Tail lights were not functioning proprly but personnel didn't care.

Good service and price!! Thanks!!

The online application needs a little work. I could not take the pictures with my phone when trying to go through that process. There was also no option to attach a picture. Happy that the employee was there to check us in and had us in and out in NO TIME!

I had 2 cancellations on a â€œguaranteedâ€ reservation. The worst customer service I've ever gotten. Called and spoke to customer service Morgan and was told I'd be issued a $50 check for being cancelled on. After first cancellation I didn't believe I'd receive this credit so I asked for the phone call that was recorded to be sent to me. Which is offered at the beginning of the call by U-Haul. I never received that or the credit. Also in store I mentioned that and was told I'd get a credit in miles. That also didn't happen. Based on all this I am very displeased with the service.

A very smooth process. Reservation had been made on line and van was waiting for me. A very professional organization.

Mileage on the truck must have been off from when I picked it up because I was charged an extra $50 after driving the exact distance I was scheduled for. I didn't notice this until I was about to drop the truck off, and was unable to contest the charge at that time. When I arrived to pick the truck up, there was only one person working, so there were about 10 people in line and it took 30+ minutes to pick up a truck that I had scheduled over a week in advance.

I would have sent this email sooner, but we were very busy with our week long Brimfield Show, the reason we rent a truck 6 times a year to transport our inventory to our site to sell. This not the first time that U haul has messed us up with rentals and rental locations. This time however, was the most inconvenient and costly mess up yet. I went to my prefered pickup location only to find out that they had no truck for me. They had no record of my reservation either. I ended up talking with someone from Uhaul customer service and was told that somone had cancelled my reservation, saying that it was a duplicate. I had a truck reserved for Sept 1st, and one for the 11th. They cancelled my Sept 1st reservation. As I continued with customer service, I asked about surrounding areas where I could get a truck...they kept telling me that there was nothing in the greater Springfield area. It took me a long time to FINALLY get an answer to call the Chicopee location (In the Springfield area)....it was now 5:15 pm, and I had to drive way out to Chicopee before they closed at 6pm...AND I had a lot of extra mileage to pay for...never mind the stress I had to experience. I feel I should get a full refund for my Sept 1st reservation. This was unforgivable. I Certainly was NOT the one who cancelled my reservation...which cost me a lot if time and money losing a day in my setup. I will be awaiting your reply ASAP. I plan on posting publically on social media regarding my experiences with Uhaul. Outraged, Yvonne Gamache 413-544-1564 See the attachment for contract information.

Staff were helpful. Our experience was fine except we had to drive an extra hour to pick up the truck and wound up with one bigger than we needed. So there was extra for gas, tolls, and the driving around the city was trickier. It was move-in week but weren't notified of the changes until the day before and we reserved a couple of weeks in advance.

It's frustrating that this location could not compensate us for the mistakes of the pick up location.