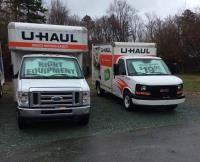 The place is a gas station but the pumps were not on when we dropped off. We would have had to drive 20 minutes to the nearest gas station. We didn't make the drive & were charged over $30 for the 1/4 tank of gas. The place is also dark & dirty inside.

I had ordered 3 packs of pads and when we got there, there were no pad available even though I had called twice Ahead of time to verify my reservation. This was disappointing and I received no compensation for this even this ig limited our packing abilities.

I am happy with how the owner and the staff at this location helped me since I was at the location I selected but not the one the website transferred me too. I did not know the website would switch locations and there was no flag to let me know it had done it. I would not have gone to the location I selected if I had known it was not was shown on the screen. The location the website transferred me to was out of my way and I would have chosen a different location. The location did not have the van I wanted and so the mileage charge was $.50 more per mile which more than doubled my expense. I had people meeting me at a designated time to help with the move or I would have not even have rented the truck. I think Uhaul the company owes me a refund for what amounted to bait and switch.

Using the online system to reserve didn't work for me. It wasn't giving me the correct quoted price and it would not let me select the pick up where I needed it to be. My daughter in law said to just call the 800 # which I did and everything was great from then on.

This was a Virginia gas station where the store supervisor was very uninviting. She had no knowledge of my drop-off, then told me I was 2 days early (the contract stated I had UNTIL July 28th to drop off, not ON the 28th as she incorrectly told me). I was instructed to drive my car off the trailer myself but she didn't know the chains were still attached underneath. Luckily I checked myself and removed them, otherwise I would have done damage to my vehicle. Finally, there was no air at this station (contrary to what the pick-up location had stated) and I had to drive 4 miles on 2 flat front tires and pay out of pocket to inflate them myself. The store manager did not inspect the Uhaul trailer or truck and I had to request a confirmation drop-off slip. After spending over $4000 driving for 5 days across the country, this is not up to the standard I expect as a Uhaul customer. I will not be using Uhaul again unless some contact and compensatory offer is made. You can reach me at 323.877.5483. Neal Rock

Everyone was friendly, communicative, and helpful. Made moving a breeze.

I called the location to reserve a towe dolly, the girl told me she did not know how and to do it on line.. I tried on line and it kept freezing up on me till I gave up. I went to location next day to get towe dolly and there was no cellular reception. I drove around the area for 20 minutes till my phone got reception enough to process transaction. Drove back and got dolly. 10,000 times harder than 20 years ago when i rented. I will never use haul again!!!!!

Did everything on line, but had to repeat everything to man over the phone. Ordered 20 pads he said only had 10, got none. Time consuming.

The hill outside is moderately steep, and I was concerned that I might scrape the bottom on the incline.

Your customer service line was used the day of rental for help with the online portion for lockbox help. They were completely useless and unhelpful. At the time of reservation the rep said I'd need my email and conf# only. Due to the location I was unable to use the website-poor service on a mountain. Customer service said if I'm making a call to them then I can use the web. I was 2 hrs late getting the keys therefore stuck in a snowstorm and took 6 hrs getting home instead of 2. Unacceptable customer service in my opinion. Even with weather issues I was still charged days rental bc I was unable to return it that day.(complete waste of money and time bc I received poor information and no help in time of need). Only reason you see a star is for the store mgr who helped when he arrived.

Billing I was billed twice for single trip. Still working to receive the payment I am owed. Please take care of this situation.

I did everything online to speed process as suggested. Had to repeat everything at the pick up location. Travis could was dirty inside cab. Truck had mechanical issues, possibly a ball joint? That's after being sent in circles to find a truck I had reserved a week in advance. Not sure I'll ever do business with uhaul again.

It took more than an hour for them to process the paper work. The stuff member is poorly trained.

I was charged extra for gas which was clearly a scam... The clerk and i visible checked the gas in the truck ( the truck was on a hill at least a 30 degree angle) the gadge read just under half full... Upon pick up i checked the gas on a flat surface and it read a quarter tank so brought it back at a quarter tank.. I was chreged 36 dollars in gas from my debt card.. I went in the next day and asked the clerk why my card was charged he said the tank wasnt half full he said it was a quarter tank. I asked him did he checked the gas gauge on the hill or the flat service he told on the flat surface. He agreed that it was his mistake and he would refund the money to my account... This was sunday it is now wednesday and no returned money... This is clearly a scam to get extra gas to pissible put in his car... I will never ever rent another uhaul truck again and i will always try to deter people from going to uhaul... Im very disapointed in how uhaul chosses to represent itself...

We had made a reservation for 10 am the guy didnt show up till noon after being told numerous times we were waiting for him at the store. Than after we returned it the same night he charged us an extra day.