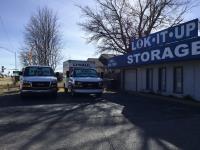 Robyn was really great in helping me figure out what I would need for my move without being pushy or 'hard sell' at all. I will definitely recommend her to any of my friends for moving.

The ramp on the truck was to short for the truck causing it to be a very steep angle. We had a hard time loading and unloading. It cause us to slide on the ramp

Staff was wonderful and very helpful!

I will definitely use them again

Provide them with the rental equipment that they paid for upfront and if you do not provide it GIVE A REFUND. Absolutely terrible customer satisfaction. Would never recommend this location.

The online pick up was a nightmare!

We started our experience over the phone. The lady that owns the franchise had zero phone etiquette and continuously blamed the system and her computer for her inability to create our reservation. The day we arrived to pick up the truck she had a sign on the door that said â€œmasks required no exceptionsâ€. We opened the door and she had two customers inside the tiny office area and none of the three of them was wearing a mask. I said something about the sign and she kind of waved her hand and said â€œIt'll be alrightâ€. We waited outside. When we were able to go in to start the paperwork she said, â€I've known him since he was a kid. He's OKâ€ referring to the previous customer. She still wasn't wearing a mask. During the paperwork phase she informed us she was going to be closed the next day and to return the truck the day after at 9:15 am when she got there. Again, throughout the visit, she struggled with the computer. She also went on a diatribe of how worthless and horrible Joe Biden would be for the country. I don't like either side, but that type of discussion should not be had in that environment. I arrived at 9:15 and parked in front of the gate I drove out of when I picked up the truck assuming I would go back in because the area in front of the business is extremely small and already occupied by two other uhaul trucks. She was not there. I tried calling her cell phone as instructed should I have problems. It went straight to voicemail. I then texted to see when she would arrive. She pulled into the parking lot 5 minutes after I arrived and started yelling at me because I was blocking her driveway and her customers couldn't get in. She said she'd had a few customers call her to complain they weren't able to get in the gate already that morning. I was there for five minutes and nobody but her pulled into the lot. We used that location because it was close to our loading point. I will not recommend that location to anyone I know and will be putting this review on yelp when I'm done here.

I cannot think of anything at all that could have been improved. Robin was friendly, so helpful, and the equipment was not only spotless, but sanitized ! Just easy from start to finish, top-notch!! Great selection of equipment, too, from which to choose. Loved the cargo van we used!

This woman running this place has no business being in customer service. I don't want to get into the details. There is no way to make this location any better. It is an embarrassment to uhaul. I have filed a complaint with the Better Business Bureau.

The lady needs customer service training. She was not very friendly.

Disorganized and unprofessional. Had me sweep out the back of the truck after I returned it. There wasn't anything to sweep out, but isn't that your job?

Robyn was great!! Very friendly! The trucks were very nice and clean!! I will definitely recommend!

Associate was very late and rude. Had the truck reserved for 9 am and was not able to pick up until 10:15. Then when was addressed that we only had 2 hours and 45 minutes left to return she seemed irritated and did eventually give me the full four hours with attitude. Upon return of the truck she was again late and not available for more than 30 minutes I sat and waited at the location for her to return.

Was very aware of being distanced due to Corona

Robyn was extremely nice and helpful. Could not have asked for a better experience.

The owner, Robyn was very unprofessional and obnoxious. I was in the office almost an hour to get my truck because she wouldn't stop rambling and yelling at her dogs behind the counter. She was extremely obnoxious and wasted so much of my time. I was in a hurry trying to get moved and it could have been a much quicker, better experience. I have rented several uhauls, both in Oklahoma and out of state, and have never had an experience like that. Would not recommend or go back to her ever again.

The equiptment was fine no problems overall there. However, the lady who owned/maintained the place was absolutly atrocious. She yelled about everything and was overall unpleasent.

Don't hide your fees. The cost that was advertised ended up costing me triple!

Smelled like smoke had cigs in ash tray truck drove like crap like it's been wreck in the front before other than that the truck was clean and for some reason can't get ahold of the tenant and they charged me sand extra 25 bucks for something , I haven t called yet to see

We went to drop outside of normal hours, and there was nowhere to park. There were many signs with conflicting info. We weren't sure where to drop the keys and it was generally unhelpful. We might have called for help but there was a sign threatening a $250 charge for out of hours help and no way of knowing who to call. With this in mind, we parked the truck the best we could and dropped the keys into the night payment slot.