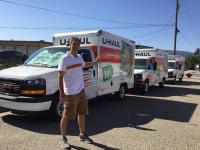 The person was not very nice! I checked the oil and it was Very black!

The gentleman working at San Luis Mini Storage was was friendly and helpful. Zero complaints with him. The online check in was bad though. When I filled out all the info online including a picture of my face and the front and back of my driver's license. It told me I needed a secondary form of ID on top of that like a passport (who carries that with them?). I selected call a secondary contact and gave them my girlfriend's cell number. She was at home and didn't pickup because it came up as an unknown number and then when I asked a U-Haul customer service person to try calling her back they never replied and then the chat session "timed out" and it kicked me out. I tried to check out at the office but the secondary ID thing was giving him some issues as well. He eventually got a U-Haul rep to fix it. I was supposed to pickup the truck at 11am and it took 30 minutes just to sort that all out while movers we're waiting for me to get there. As I said, no complaints towards San Luis Mini Storage but this is probably the last time I'll use U-Haul.

Availability of trucks was low, and the guy at the window went out of his way to try and find me a truck.

Probable the only thing that never the car carrier that I rent just need a little of lubrication on the metal tide Dow everything else is great, All do it be nice to drop off on any location without question ask,. God bless you all.

The vehicle was covered in dust/dirt - especially the windows. I was unable to adjust the side mirrors on the truck. When I walked up to the window, the person check people in, was less than friendly. I was supposed to check-in on line but had not done so. My needing their assistance seemed to be a bother. When I returned the truck a few hours later - the return was more professional.

Three years ago, I moved from San Diego to Santa Maria. I rented a truck and a dolly for my car. On the way up, i noticed one of the wheels wobbling. I turned out that of the five bolts that formerly kept the wheel attached to the trailer, four had broken off. When I tried calling U-Haul, I was repeatedly disconnected. When I tried the app, it wouldn't let me submit the problem. I started describing my predicament on Twitter to @uhaul, someone contacted me and the problem was solved. This time, I picked up the truck and dolly and started my trip. As I was driving someone pulled up next to me and pointed at my trailer. I pulled over and discovered that one of the pins that held the ramp up was missing and the ramp was being dragged along the road. I called and an hour later someone came and installed the pin. He said they were waiting for that pin to be delivered and that dolly shouldn't have been rented. How satisfied do you think I should be with my U-Haul experience?

The location is pretty awful but the staff is great and accommodating. They were very customer oriented. Will come back the next time I have to rent a truck.

Had to change trucks when renting and the rental contract was messed up. It went from a 24 hour rental to 6 hour and I think I was overcharged.

Jerry was very organized and efficient.

The gentleman met me at the vehicle took the keys and said Thank You. That was it! No checking anything. I left the vehicle with over the gas amount with the dolly and blankets. Would have liked a more thorough check in process and a receipt upon return. He said it wasn't necessary. Other than that everything went smoothly.

Thank you very much for an excellent service. I will rent again from this place. The owner is very kind and friendly.

Steering wheel was sticky and filthy - used 6 wipes to clean it. Assumed it would be clean in these covid days. Windshield wipers were like rags and did not clean even the wiper fluid off. Glad we didn't have rain on our trip. Back latch was very hard to operate; had to keep slamming it for it to finally latch. I was not advised that i needed to bring my own tie-downs and lock to secure the truck for our 4-day rental and interstate travel. Guy at center was rude when I asked about tie-downs: "Read your contract!"

We reserved our truck online for a Friday pickup, we took time off of work, had paid help arranged, and family rearranged their schedule to be there. We got to the pickup location and our truck was not there. The gentleman who worked there was very nice and helpful and we have no complaints with him. We are however very disappointed in the service from uhaul. We were told there was nothing they could do to get us a truck before the next day. We even broadened what size truck and how far we were willing to go to pick it up. When asked if we could get some type of compensation or discount for all of the trouble we were told no. We lost out on our moving help now due to scheduling conflicts and the fact that we were unable to find alternates on such short notice. Consequently we had to do it all ourselves, despite disability and physical limitations. We understand things happen but some kind of warning or notice would have been appreciated along with some acknowledgment of the problems it caused by way of discount or something of the like.

Pleasure doing business with them. Guy at the front desk was helpful and nice.

I reserved for Morro bay. Would be nice if switching locations was more prominent.

Customer service was bad. I called the uhaul rental place to make sure that the truck was available for pickup about an hour after I was told what time I could pick the truck up and the employee told me in a short, irritable,and rude tone of voice that I was suppose to pick the truck up an hour ago and that he would save it for me for one hour.He continued with the short attitude while I was completing the paper work.

I was sent to the wrong location and then sent back to the original location. No one seemed to know which place I was picking up from even though I had the right address in my confirmation email.

Although I dropped after hours, the online process was simple and instructive. The location had an area that I was able to drop near the other trailers. The area was a little tight to maneuver but had no problems.

Clean the inside of the windshield Loved that my preferred vehicle was available! Parked in a way that made it super easy for me to drive away (backed in) Thank you!

I was having a rough couple of days and misunderstood my bill. Thank you for trying to make it right. Appreciate it.

Great service, great availability, convenient location, equipment was new and easy to use. Thanks!

Actual location of building had poor signage and behind high chain link fence. Gate was locked, no one answered phone. Two men behind fence & directly in front of building, maybe 40' away having conversation, wasn't sure one was an employee, reluctant to interrupt. Finally I inquired if they knew if the place was open, reply was are you picking up or dropping off. Said dropping off, was told put them in the box. (hadn't seen box was focused on finding correct building, was 15-20' behind me near road) scanned to left & right, asked where is box. Reply was terse & condescending tone " it's the big orange box with the white key on it right behind you". I replied "I got it, thank you' in a like tone and got a very condescending your welcome. Perhaps when he is a senior and in an unfamiliar place someone will talk to him the same way. Hopefully it just a bad day & his disposition has improved.