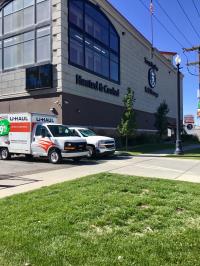 Perhaps more variety at rental location as it is a storage facility...

Man who helped me was unmasked during covid pandemic and he was surly. Before checking any details, he told me my wife had to pick up vehicle even though she told person with whom she made arrangements that i would pick it up and she provided a copy of my driver's license. It's inefficient and rude to lay down rules for me as though i am breaking them without even knowing what is going on. Truck worked fine but staff needs lesson in courtesy. Especially, he shouldn't unnecessarily bug me with rules that aren't relevant. Apparently more interested in authority than service.

The mileage on the odometer was significantly higher than what showed in the Uhaul system. The agent stated he could not update it. The result was me having to pay for over twenty miles I didn't drive. I can document the miles I drove. Repeated attempts to resolve concerns have been ignored.

the equipment was clean and ready to go and the process simple but the attendant was very rude and made very inappropriate jokes.

Fully look over and inspect the equipment. A wheel barring completely broke, popping the tire while we were traveling down 1-80 in rural Nebraska.

Staff was very friendly and helpful.

Seriously, the agent was easy to work with, pro-active in problem-solving, was upbeat, friendly and helpful. No improvements needed.

The pickup location was respectable and the Security Pro owner was helpful and competent. The Uhaul check in process needs a major overhaul - quite clunky and lengthy.

I didn't have a problem with the truck or anything necessarily, but I was very uncomfortable with the return process. I returned it after hours and it was dark and there is no one around that area and no lights. There was a man on the street watching me as I arrived and I waited for him to walk away before I got out to take the pictures required for return, one of which makes you open the back of the truck and take a picture, leaving yourself super vulnerable. As soon as I got out and opened the back the man turned around and started walking back towards me. I slammed the thing shut and jumped back inside and locked the doors. Seriously, you're creating a human bait trap, what if someone comes up behind me and locks me inside this moving truck and takes me to their torture basement? You should have an option to come back in the morning and complete that stuff in the daylight. I know I'm paranoid, but I did not feel safe.

The service was amazing, decently priced, and even the clerk helping was really nice. The only problem is that the back of the van that I rented was really dirty and I had to deal with it.

The cab was dirty. While there were no wrappers or trash inside, there was a sticky soda drink that dried all across the cup holder section. Also, there was dried mud and dirt in the floors. Worse, though, was the fact that the agent was unfriendly and acted as though I was an inconvenience. Who hires these people to represent your business?? That said, it was the ending of my experience that is driving me to complete this survey. I picked up the truck with just slightly less than 1/4 of a tank of gas, and it returned it with the gauge exactly at 1/4 of tank, so I added slightly more gas than consumed. However, I was charged $55 for 6 gallons of gas plus a fee. I drove the truck 70 miles, and have receipts to show that I added $18.09 in gas, slightly more than 6 gallons. This would equate to approx. 11 miles per gallon fuel consumption, which corresponds to the fuel economy of a 15 ft truck. The fact that I was incorrectly charged $55 for more gas is borderline fraud.

Everything went well. Your counter manager was very helpful. We will definitely rent here again when the need arises.

We had Brent help us rent our truck. He was great to work with and answered all of our questions.

The guy in the office was rude. The cab of the uhaul was dirty. Not terrible, but sticky. No where to park. I had to park a block away and walk.

The guy at the desk could have been more polite..just because he was having server issues with the computer doesn't make u be a jerk..he didnt greet anyone and his vibe was off unless he was dealing with u personally. I had been standing there for a long while after is other customer took forever, and then he skipped over me and took another customer without acknowledging I was there waiting..my husband was upset..but we kept calm.. So after he finished with everyone else then he finally told us his computer was movin slow and we had to wait longer so then he offered me a chair... He just needs to work on his customer service, I felt racism may have played into this a little bit

The service was great, but getting to this location and finding parking was a bit difficult.

gas tank was at 15/16 full. I was told to bring it back at same level or pay penalty rate for gas fill up. There's no way to fill a gas tank and know you are at 15/16 full, without shutting off the gas and turning the key in the truck to check the gauge multiple times. So, this practice in effect rips off the customer, because the only way I can know is to fill up the truck. Recommend you always rent the truck full.

Firstly- I booked for remote vehicle so that I can pick up with my smartphone and not have to wait for hand delivery. Pick up time was 6 PM and when I reached the place at 6:20 PM and tried to press pick up my truck on my U haul account which I was asked to do originally, It said your truck is scheduled to hand deliver, Please wait for the office to open at 8:00 AM, so anyone who is trying to reserve for midnight or planning that, Please don't. Also, I filled the gas as per the markings they gave me, and still they charged me for the gas. Poor Service overall.

Great experience. We would definitely go there again.

Great customer service. Went to buy some boxes and system was being slow so they just let me have them. So awesome and kind! Will work with them again.

Very helpful guy at the desk, pleasure to deal with and everything went as planned. Thanks for a smooth pick up.