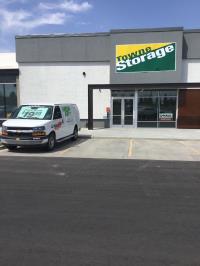 Showed up at 4:58pm on a Saturday to return the truck. Store was locked. Was charged a late fee. Talked to the store worker before and on his way out was told to use the app and pay the fee. Called multiple times without any response. Store worker was lazy and unsympathetic. Hours are inconvenient. Store location is odd. Will be recommending that people do not use this location.

Not just have a key drop box, I had a couple of questions that I planned on asking upon my arrival and there was nobody there. Also there was a couple trying to figure out how to pickup their vehicle and had no clue where the key was and couldn't get ahold of a personnel.

I had gotten a U-Haul via the 24/7 pickup and when I arrived to pick it up the app said I cancelled my contact (not true). I had to wait outside for an hour in the 106 degree dry Utah weather for someone to show up. Worst part of all was the guy who runs the place was sitting in his car right in front of me for 30 minutes while I was obviously frustrated with the app and pickup. He didn't offer to help and only offered assistance when the clock struck 12:30. On top of the terrible customer service and app issues the truck was dirty with crumbs and hair everywhere. And the back of the truck was wide open because he never closed it after looking through it. I'm going to Penske from now on.

Who's that crack Adict working at salt lake location there such a horrible customer service I parked the truck in front of the building to ask the guy &get directions where can I go Park When this goof crackhead dick ass Piece of shit come out screaming at me like a lunatic move the fucking truck now Screaming and yelling at me using that kind of language move fucking now So I went and park the truck So I went to his office to get his name position or speak with a manager or something and the guy he locked himself in the office I was waving at him he was looking into the computer like I was not there Some other customers show up Customer was trying to go inside of course door lock Customer he was waving at the guy like hey are you open?totally ignore customer walk away such a disappointment and horrible experience

Called the main line to get a drop off location, was told to take both trucks to this location, dropped off at 11am and No one was there. Called the main number again and was told to leave the keys in the drop box, and we would not be charged... recieved two emails saying we have been charged after hours fees. Have called 4 times, and been transfered all over, No one can give me an answer or a refund. Not a good experience from start to finish.

My favorable rating is specifically for Town Storage Urban Edge, not Gateway Storage where I had originally contracted to pick up the truck. I went first to Gateway for the truck and was told they didn't have it. They said they had tried to call and text me but I received neither. ION response to me request, they told me they had no restroom. And They told me I had to go to the other facility (Town Storage) to get me truck. So I had to call an Uber to take me there. And when I got there, the truck had no moving pads or dolly as I had requested. Towne Storage did not have a dolly so I had to go without one.

1. There was a homeless man in the truck when we picked it up. 2. Our tow dolly was not available at the initial location, despite me calling ahead for clarification and being told otherwise. 3. The person who gave us the truck called a central number, and then reported to us that our tow dolly would be at a second location. Went to that location. Tow dolly was not there but instead we were provided a third location. 4. Waited in line for over 20min at third location, and had a frustrating interaction with the staff member. Staff member could not initially find tow dolly reservation online. Once settled, she initially overcharged us by $59, which is double the rental cost. Redeeming part at third location was the man who helped us set up tow dolly. He helped us attach my car, which was not required but very appreciated. Overall, very disappointed. It took over 2 hours in total to get our rental truck and tow dolly, which gave us less time for moving.

Overcharged me on gas because the truck was only half full when I received it. Pushed my check in time back by an hour without notice (after I had hired people to help me move) because they were closed for two hours in the middle of the day for some reason? Person at the location explained nothing about rates and simply handed over the keys, which is completely unprofessional and shows a complete lack of competence. Terrible location, I will actively tell friends and family to avoid that location at all costs in the future.

My order was incorrect and missing the 2 dollies I requested, requiring I travel to an additional location in the valley to rent them. The man working at the location seemed confused at every turn and mixed my order with another customer's twice. He was unprofessional, gave me identifying information posted on another customer's order and then charged my card three times for my rental as well as for another customer's rental, increasing my bill from $74.43 to nearly $700.

The truck was filled with trash in the back and in the cab, the tail lights didn't work AT ALL. And when i went to get the uhaul the lady told me any days i dont use and any unused miles will be refunded which the guy i dropped it off with replied with â€œOh yea they say that shit all the time but you can't actually get any money back.â€ I'm heading back to utah this week and was hoping on having that 70+$ back to use for gas money to get there to pay my final rent to my landlord and do the walkthrough but now i have to borrow money to get back. If you guys can look at the papers and actually refund me that would be awesome, i'm pretty pissed that those lies seem to be common practice though.

When i got there, they had rented my reserved truck to someone else. found another u haul location a mile away and was forced to pay another $ 15.00 to uber over next location. Even called U haul evening before to verify truck was avaliable at this LOCATION.

Make sure you dont charge people twice for rental fee

No hand truck available despite reservation for one which delayed my move. Gas tank also not full which added 50 dollars to my expenses as well as a late turn in fee of 54 dollars.

We dropped off the truck after hours, so we didn't experience customer service. The surrounding location was a little sketchy, but once you get into the lot itself, it's open enough that it's okay

I picked up the uhaul with 1/4 tank of fuel. I returned the uhaul on 1/4 of a tank and was still charged for fuel. I would like the fuel charge to be returned to my card please.

Hayden was great to work with. Would rent here again

I called this location in advance with a few questions and the gentleman was super duper nice and same when I came to return vehicle. Like i'd want him to work for me.

Nothing, this experience was so much better and easier than I had anticipated and it made our move a breeze. Thank you!

The representative we worked with was very personable and professional