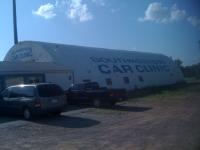 Everything went smooth, he was very helpful.

this place was very dirty and strong weed smell. the guy did not even asked me any questions just asked me for my ID and Credit Card and charged me for "safemove" without my permission or signature. I have also escalated and no one called me back. I am so upset with my whole experience. This is unacceptable.

The location is very hard to find..They need a sign on Western because it sits a block off 86th and Western.

Phil was friendly for deliver and drop off. Will use this location for future rentals.

Not sure who the owner was but I imagine it was the fellow slouching at his desk hidden away on the back room who was disinterested in helping me help him to get the trailer checked in... it seemed he was asking questions of me to be difficult rather than to get to my needs and check the trailer in. As for his apparent helper that was outside doing some sort of cleanup work around the Uhaul vehicles, he walked around me several times without acknowledgement as I took action to begin a self-guided check-in. Then it seemed he got involved with his cleanup work, I came to a stopping point and went over to him to ask for help, he continued with his work keeping his back to me as I patiently waited 5-10 feet from him for an agonizing 2-3 minutes. Approaching the three-minute mark I tried to make verbal contact but got no response. That's when I walked in to contact someone inside the building as mentioned above. After not receiving help from the person inside the building, I finished check-in by myself. As I was completing my check-in, the inside attendant approached and said "I wished you hadn't put it there." I was done and outta there.

Smelt strong of Marijuana, not friendly, dirty and my truck had mud foot prints all in the cab

The truck was not available on the time scheduled and the whole place was locked down and not open for business. We were on a time crunch anyway and so it made for a stressful day. When we came back later to get the truck the attendant was rude and acted like it was our fault that he was late.

The location is blocked by a chain across the entrance even though it is supposed to be 24 hour drop-off. I contacted the location the next day and they said, "It's ok to just leave the trailer on the road outside the chain." I did not feel comfortable doing that. When my husband dropped it off the next day he said that it was very shady and didn't feel comfortable for me to drop it off myself there alone.

The area seemed dirty, unkempt, and shady. Thankful I did not return my truck here after dark.

We returned after hours.

Overall experience good. However, I take exception to be charged $5.70 for fuel, for a total of 4.6 miles. Acknowledging that it would have cost me more to drive and find a gas station to add fuel. But $5.70 is excessive for this distance. I have pics of actual fuel gauge, there is only the slightest of movement.

My email receipt was never sent.

They charged me an extra $21 on gas that despite it being at the level required to bring it back. I took pictures of the fuel meter before and after. The representative was also rude as well.

Hard to find. Not a professional looking place at all.

The truck wasn't set up correctly when I went to pick it up. I had other obligations and had to leave and come back later. It took several phone calls to correct. By the time it was set up correctly it was dark and I couldn't see all the red dirt inside the truck. The location is dark and I didn't feel safe. The app for after hours pick up kept saying no network connection even with 4 bars from my carrier, it took forever to get the pics uploaded and get my code to have access to the key.

The 'office' was dirty and cluttered, disgusting actually. The u-haul sign sits OFF the main road and was maybe one foot by one foot. We drove by the place twice before finally seeing it due to no signage. The man was courteous and helpful, but the surroundings leave room for improvement. We will rent from u-haul again, however it will be a different location.

The inside of the cab was dirty: the windshield, inside and out, the floor had spilled drink, the dash, cup holders, seats....everything was sticky, dirty, grungy

Let me start by saying I just had surgery on my collarbone. So I am one arming everything slowly. I call the location to verify pickup and time. Ask if I can come early. He says no problem he gets there between 8:30 and 9. I said awesome I'll see you around that time. I show up with my dad whose dropping me off. Walk in and stand in front of him for a min or two. He then answered his phone had a conversation. Hung up. Did something on his computer. Then answered his phone again had another conversation. Hung up. A minute later said you the one going to Texas..... we stood there for over 5 min without any acknowledgment bad start but gets worse. I also ordered blanked and two dolly's. We ask if everything was already loaded he said no we have to get two Dolly's from behind us and get the blankets out of a car. It was pouring rain out side I have one arm..... he pulled up the truck. My dad took the Dolly's and loaded them into the truck while he unlocked a wrecked car in front of the building. He grabbed his umbrella and started handing me the blankets to load them. I just had surgery and he could clearly see my left arm was ina stabilizer.. he stood at the car door under the umbrella handing me at couple and my dad a bunch We were soaked and unimpressed and had no clue if w me had got the right amount of blankets as he was pulling them one at a time out of the car. So now I'm soaked. All the blankets are we. I'm in pain. He just walked off. We had already done the paper work. I was very pissed but had moved on the clock headed to my house. The truck was great. The trip was fine. I returned it. They were nice at jjs auto. I'm still mad and want a call back

Thank you Paul for being so kind and informative.

I dropped the truck off after they had closed, but it was very easy to do.

The guy there needs to give out correct information. I had to secure the deposit with my debit card and paid with cash. I asked him when the funds would be put back on my debit card it's not going to take like 7-10 days is it? He said no it should be back on there in just a minute if not by midnight. Here we are the next day and still no funds released back to my debit card.

Scammed me on my deposit stating that I did not fill the tank up like it previously was. Extra charges, fees. BS If I were you I would take a pic of the gas before and after you use it. Beware!

Paul is great, but this particular truck was garbage. The power steering barely worked, the truck struggled shifting and wasted way more gas than needed, and it rained in TX this morning which exposed leaks in the cargo area. I for some reason cannot seem to have a smooth experience with U-Haul, so I'll go ahead and assume it's just bad luck on my part and look elsewhere next time. Also, air fresheners would go a long way. This truck cab smelled like someone moved a petting zoo after a rainstorm in it. A 20ft truck shouldn't handle, shift, turn, or use more gas than a 26ft, right?