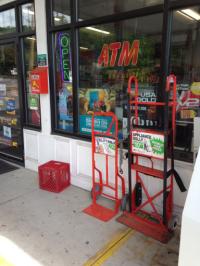 guy was a jerk, annoyed, and not helpful. And charged me 6$ for gas even though I added the correct amount of gas. Not going to fight over 6$ but defiantly never go there again and will tell all to stay away from Belmont location.

I had 175 taken out when I went there to get the uhaul. When I returned it my bill was 142 and I had to give the 42 dollars so I'm not understanding

The dropoff location was easy and convenient, however, the phone app was less than easy to use. I took pictures prior to my drop off for my own records. When the app wanted me to upload them, it stated that i needed a more recent photo. This was frustrating having just taken the pics 10 minutes before using the app. So, i had to go back and take another set of pics directly at each part of the form. It took me over 20 minutes to drop of the truck through the app. The user interface needs a little work.

First issue I had was that I received a call 2 days before my scheduled date about not being able to get a 26' truck but instead getting the 20'. Second issue was that uhaul change my pickup location (originally I had setup Worcester) I was ok with all the above but upon arrival to the northborough location, the attendant was nice and respectful but didn't find my name on his computer. Upon spending 45minutea on the location and getting ready to leave in my car he comes running out to let me know he sees my name now.

While returning the application crashed 10+ times. It took me more than 1 hr to return. Horrible experience with the app.

Took to long checking out was told internet was slow. When I return truck I ask if I should fill the truck I would pay for it Didn't go far gauge was not full but was told don't worry we didn't give you a full truck he would take care if it so I was charge 20 bucks for about 5 gallons of gad

No problem with the location itself but rather U-Haul itself. From conversation with the store proprietor, it seems like U-Haul was supposed to provide him with a part number for the appliance dolly I ordered. Because they didnt we had to call U-Haul and it took 20+ minutes to get it sorted out. Not a good experience.

The owner was very helpful and pleasant!

A bit slow to get the truck but with patience we succeeded.

The attended was rude and insulting. Made me feel like i was imposing and all i needed is the truck. Lied to me how late i can return the vehicle despite a drop box anf the location being open 4 hours after i dropped off the vehicle. Charged me for 2 day rental on a one day 8 hour rental. Poor cultural adjustment...

Absolutely do not drop off or rent U-Haul from here. The man was completely disrespectful to me. I waited in line patiently and while he was checking out the person in front of me he started to ask me questions. I asked nicely for it to be a private conversation and he continued to ask questions in quite a rude manner. I had an injury while using the truck and the man at the drop off site asked me, â€œWhat would you like me to do about that?â€ I asked for some compassion first off and he still continued to be extremely unhelpful and disrespectful.

not helpful with check out, rude,

I had a very difficult experience when trying to rent a truck. It took over 2 hours to actually rent the truck. When I originally called I was given an address in Northboro near the Solomon Pond Mall and a price. When I went to pick up the truck, I was told I was at the wrong location and was told my truck was at a gas station on Belmont Street in Northboro. I am not sure why I could not simply get the truck at the main location in Northboro. Anyway, I drove to the Belmont Street location and it was an extremely frustrating experience. First, the location was a gas station/convenience store with one woman working. The woman had to wait on customers who came in every couple of minutes to buy gas, lottery tickets, and cigarettes etc and she could not spend more than a minute or two with me before getting interrupted with a convenience store customer. When after probably at least an hour, she tried to print out my paperwork, contract, and receipt but the printer was out of paper so she tried to put more paper in the printer but for some reason it would not print. So instead, she showed me the paperwork on the computer and the charge was about $60 more than I had agreed upon with the person I had made the reservation with. After questioning this, it seemed that they had added some optional insurance that I had not asked for and did not approve to my bill. I then told the woman that I did not want this insurance that was added to my bill without my permission and she tried to take it off the bill but did not know how to do this. After trying several times unsuccessfully (and serving many more convenience store customers while I and my 12 year old grandson had to wait) she finally called a supervisor to ask how to take this unauthorized charge off my bill. The supervisor was in a vehicle stuck in traffic and was unable to do anything to help at that time. He told me he would issue a credit to my credit card for the over charge and it would take 3 to 5 business days to clear. It is not good business to try to run a U-Haul business at a very busy convenience store/gas station with only 1 employee. I do not fault the woman - she did her best and really tried but she had to attend to the convenience store customers while I was left to wait. So it took at least 2 hours for something that should have taken 10 minutes. Very frustrating. Then I had another surprise after I returned the truck. I was told that I had the truck for 48 hours but was unaware that there was a mileage limit or that I would be charged 40 cents a mile for every mile driven over the limit. I only kept the truck for less than 24 hours and was assessed an additional charge because I apparently went 10 miles over the mileage limit. This is no doubt my fault for not reading the fine print but my suggestion would be for U-Haul to explicitly tell customers that after X number of miles they will be charged 40 cents a mile. This would likely reduce any misunderstandings and

The experience was amazing. It was quick and simple.

The representative was not very helpful

Its is hard to drive this truck , very very hard to turn the ignition on

I gave my card number online to pay for the uhaul and was charged $1 to make sure it would go through. When I had my step dad pick it up/drop it off and they made him use his credit card to pay for it instead of using mine like they were supposed to.

I only ordered a mini truck and when I went to pick up it truck it was a larger one. I was a little disappointed that I had to pay more money than I planned on paying. I needed the truck on that day so I had to take it...

The truck was not clean and contained tree debris. Supplies booked had to be refunded and those that were available were not the quantities requested. Overall, not impressed at all.

I reserved the truck online, and specifically declined the "Safemove" insurance. But when I picked up the truck, it had the $28.00 charge for the Safemove. I told the guy that I did NOT ask for that and he said, "well, it's there", and acted as if there was nothing he could do. Since I needed the truck, I felt as if I was held hostage, and just signed for the insurance. Oh, and then he mentioned that the check engine light was on, but not to worry about it. Wonderful.

I had registered all my info online then had to re-register in person with only one cashier serving both Uhaul and the service station. Delayed 20 minutes. Second, after I made my online reservation, I received a call to change the pickup location 5.5 miles further away than my preferred location, without any mileage compensation. I drove by my preferred location and there must have been 15 free trucks like the one i needed. I was not happy at all to be redirected to a less desirable location, further from my destination. Otherwise, truck was in good shape and clean and service person was competant.

parking area around truck was littered with trash and broken glass truck was clean but truck stunk like cigarettes , right passenger sideview mirror shifts and was not reliable, made for risky /unsafe conditions, and limited driving options /lane shifts