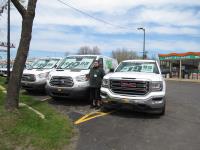 The drivers side head light was out, other than that it was in good shape.

They double book and don't notify you until day of essentially forcing you into what they have on site.

Great service from a very professional staff. Made our move much easier.

Continue to provide top of the line customer service. Thank you for everything.

Brian was so helpful and professional. He helped me through the entire process. It was a great experience and made my move so much easier.

The people were friendly, helpful and got me in and out quickly.

There was also less than 1:8 of a tank of gas when we picked it up, waited 25 minutes in line to get the keys and another 20 minutes on the phone to report the fuel problem. The truck was filthy inside and out.

Equipment was clean but drove like an old lumber wagon.

Initially filled out the rental agreement for a newer trailer and then the employee advised that he put the wrong trailer's number and needed to make changes on the reservations. The male employee then told me that there was something wrong with the newer trailer but was not sure what it was, and that he had to keep the reservations as originally executed and put me into the old, dented trailer. switched to z trailer which had many dents and outdated hook-up equipment. Also was told that the size of trailer I reserved (12'x6') was very rare, however there were 5 trailer of this size on the lot. Furthermore, was advised during reservation that I will receive a trailer at one of the U Haul locations at the Lockport, NY, but subsequently had to drive to a further location to Niagara Falls to pick up the trailer. Was very surprised that I was charged for this one-way rental almost a $1,000, which is more then double I paid for same trailer and same travel distance several years ago. It should be noted I have rented U Haul equipment on several previous occasions and I'm a senior citizen. Thank you for allowing me to comment on this trailer rental.

Truck was covered in dried mud. Did not hurt the functioning of the vehicle however

You guys are great at both locations

Stream lined experience. Customer service was awesome, and things were pretty easy with the app.

Brought trailer back same day to closest location. We ended up donating more of my mother's things in lieu of moving them to IL with us. Was told if I took it back to Genesee St location, I'd get charged the day rate, but anywhere else, I'd be charged the 4 day rate. Since I already went out of my way to rent the trailer, and my mother's condition, I chose to return it here (5 miles away). The location manager was to call me to discuss the rate but that never happened.

Where to begin with this stupid business. First off I rent a truck and was told I would have 192 miles for two days. NOPE!!! I get 84 miles to drive from Niagara Falls to Syracuse (162 miles by the way) so I got charged for 155 miles!! When given an option to dispute the charges, I wrote a complaint and was told someone would be in contact in a few days. What do they do instead? Take the damn money anyways and never call me to discus it!! What BS and a scam!!!! Then I rent an auto transport and was told I was all set for my move. I call to confirm the day before like I was told, and was told I had to drive to fredonia to get it! No one ever mentioned I would have to drive almost 2 hours to get the thing I needed to tow my car! I get to check in and the woman clearly stated they don't have any, as I'm walking to my car low and behold there's a damn auto transport labeled clear as day sitting in the lot! So I had to leave my car and drive all the way back with a rental car to get it!! Worst experience off my entire life! Never ever renting from this company ever again, and will be going out of my way to let people know that it's a terrible company and send them literally anywhere else!!!

I returned the vehicle around 5 pm on Saturday Sept 12, 2020. A young male person was in the returning booth. After asking me whether I left the key in the vehicle, without doing any checking he told me everything is oK. I will receive the receipt via email, hence I can leave. Because I did not receive the receipt via email, Sunday morning I called the U-haul. To my surprise the person that answered the call told me vehicle was not checked-in as returned. He told me he will quickly go and check the vehicle and email me the receipt with few minutes. If I did not receive the email within 10 min to call him back. Fortunately the receipt arrived, but the returned date was recorded as 9/13/2020 not the actual date I returned. You should realistically take disciplinary action of your staff that worked around 5 pm on Saturday to make sure he does not repeat the same mistake. Also commend the staff that worked Sunday morning for taking care of my call almost immediately.

everything was great except for the fact that i rented the truck and got charged 10.00 a day for an appliance dolly, which i only used a couple of times during those 5 days. This really sucks. Why cant uhaul just charge 10 bucks for the entire rent duration. Sure from a business stand point you make huge amounts of money on a piece of equiptment that requires no maintence and doesnt cost a lot to purchase, but from a customer standpoint over charging for a dolly is down right awful. I am not mad about anything about cost of my bill, except for getting fleeced on the dolly payment. thanks Bob Trane

Our representative was great!

The rental process was excellent. However, the windshield was bug covered and I had to clean it once home, interior was dust and dirt covered again had to clean. Had to leave the window open as aroma was unpleasant until interior cleaned.