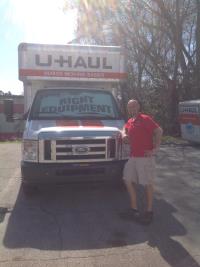 If your rental locations near me would be able to offer a delivery service to take the truck to our shop, it might save me $50 in costs that I spend by sending 2 guys to pick the truck up.

Touchless experience was a hassle and frustrating. Call me old fashioned for paper and person to person experience.

This location was excellent..no improvement needed

This location is also a carwash and unfortunately gave very poor customer service, especially by the manager of the company. The website allowed me to rent a dolly, when I arrived they said they didn't have one. They have COVID rules which is great; however, in speaking with staff and management they were very disrespectful and rude over the phone causing me to say several times that I didn't understand their attitude when I asked questions to something unknown. When I gave concern about giving my full credit card information over the phone again I pretty much was dismissed and told "we are busy, do you want the rental or not"...very rude for a manger. I work in customer service and at no point in time would I ever be too busy to give good service to every consumer, especially when representing another company! If that location cannot handle servicing the workload without friendliness and answering questions without being rude, they should reconsider being a U-Haul location or get better management who knows how to equally service customers properly. I would never use that location again! Your best U-Haul location so far is on Stallings Drive. It is further out in town but by far a good representation of your company!

Did well checking in on customer when I had a problem

The online doesn't work for everyone

There was a problem with my reservation. An employee at the pick up point took the initiative, got in the system and helped me get it worked out. Over all, things didn't go smoothly but thanks to a helpful individual at this franchise, it all worked out.

The computer was down.

We had an excellent experience with this U-Haul location. Courteous and knowledgeable representative. Will definitely use them again.

The confirmation email as well as Precision Auto's facebook, google, and website all stated I could pick my truck up at my scheduled time of 7am however the location refused to release the vehicle and told me to come back at 8am.

I made a reservation for the U-haul online. At the time of pickup, I was asked to remain in my vehicle and the sales clerk completed the transaction via phone due to COVID-19. I was uncomfortable providing my credit card info, considering I had already entered it online. The clerk was not interactive, nor was she helpful. I had to complete the initial inspection online and the link expired before I could complete it, which ended up costing me more in fees because I could not accurately document the fuel and mileage. There was dog hair in the seats and the trailer had clumps of dog hair also. However, there is a sign in the back of the U-haul clearly stating that the U-haul should be swept prior to returning to avoid a $25 charge. The return process was equally as frustrating. All done online. Personal interaction is best...socially distant, of course. There should not be a fee to have a live person inspect the condition of the equipment before or after.

As far as improvement! The pick up location was great. No improvements needed for this location.

Owner was Totally short with me When asking for the price, the quoted price should include all fees and taxes.

Drop off after hours. Location was easy to access. Plenty of parking. Had issues with drop off process app. It wouldn't read my location on my phone. Had to use my daughters phone to complete drop off.

Joe Garcia, the manager, was so rude and ugly to me that my hired guy, who is big and buff, called him outside to talk about it. Joe straightened up a little, as I think he thought my hired help/friend was going to punch him (which he deserved!!!!) Get rid of Joe, to improve. My helper Matt said he's a total asshole to EVERYONE!!!!! I'll never go back there. He's mean, disrespectful, disorganized and a pompous ASS.

I did everything online and it was fine but when i called to verify my rental the associate was rude. During my conversation with the 1st associate I was interrupted because a man whom i assume wad the owner or manager got on the phone and was even more rude. He told me that the drivers license had not been uploaded and i said it had. I tried to explain that i had an email that started online check in was complete and he continued to tell me that it wasn't because it wasn't showing up on their computers. He also told me that i had yo pay online as well because nobody was allowed ti come into the office due to covid 19. He talked to me like i was an idiot. I ended up having to drive 30 minutes to my husband's job to get his license so i could upload again since he was going to be the primary driver. When i got to his office i showed him my email so he called and asked to verify the rental, at that time they said everything was complete,drivers license was showing and that he could just come into the office to pay when he got there to pick up the trailer...it was ridiculous, I guess just because I was a women they assumed i hadn't done something right, when in reality it was them and they were too arrogant to admit their mistake, so it cost me a unneeded 30 minute drive.

Had the best experience so far and have rented many Uhauls....Joe Garcia was very pleasant and friendly. Made the pick up very easy and quick. Store was very clean and inviting. Would highly recommend this location for pick up and drop off.

The online/contactless process could really use some work. Customers are told they will need a mobile phone at pickup, but what they aren't told is that they are required to take photos, locate/inspect the vehicle and unlock a combination box before they can even take off. Had I known this, I could've planned for it. Instead, nearly a half hour of my time that I paid for and allotted to the rental was wasted before I could even leave. Perhaps a customer can upload the pictures required before arriving on site to speed up the process? Also, make sure that you aren't giving customers a lockbox identifier letter (I.e. Q) when the lock boxes on site are identified by numbers. This puts additional burden on site operator to come figure out the correct box, and completely defeats the purpose of the â€œcontactlessâ€ process by requiring the hands-on interaction.

The online check in is hard to navigate and a pain in the butt!!!

The experience was the ABSOLUTE WORST ever. I did not receive a call from the scheduling dept the day before my reservation like I was told several times. So, I called 45 minutes before the dept closed only to find out that I was doing shared pickup(I was under the impression that there was a Uhaul location in Nacodoches, Tx. I get there and follow instructions on the app for check in. Uhaul immediately took my payment but I had to wait an hour after being bounced around for someone to assist over the phone. Get a text messages hours later of an updated drop off location which I was made aware of any changes. Get to the address provided by Uhaul, it was in the woods pitch black and no signs of a Uhaul business. I sat there over an hour, spoke to several reps(EVERYONE WAS RUDE AND NOT HELPFUL WHAT SO EVER) even one supervisor. All they kept telling me was to just leave the truck there and put the keys under the floor mat and I will be charged an additional drop off fee, continue to look for the drop box. Completed the drop off instructions, like i was told, still nothing.No sign of anything is what I kept telling them. So my daughter decided to google the address, we found a number, called the number only to find out that the business had been closed over 3 months. On the way home, I was stopped by police because the left headlight was out. Get home, I spoke to someone else about the situation, he told me that a field sup would contact me to pick up the truck. NEVER HEARD FROM ANYONE!! The next day I spoke to someone was claimed to be a sup( his attitude was disgusting) he was very rude and nasty towards me. He easily switched the dropout back to original location. This was a disaster..I KNOW MY NOTE WILL BE LOOKED OVER AND I WILL NEVER HERE FROM ANYONE AT UHAUL ABOUT THIS! I should receive my money back for the total dissatisfaction of service and inconvenience!

Phone call received the evening before pick up of truck from a male with a very aggressive voice. I was told to arrive ear because there were 4 expected rentals and only 3 trucks. He would be closed so we would have to use the online check in. We arrived at 9:00 am for a 10:00 am pickup. The online site was very difficult to maneuver. I had to make 3 calls to the 1800 number. They were most helpful. The key code did not work. I spent close to 3 hours working with different operators we were unable to unlock the box. The owner of the business finally arrived and refused to come out of the building for about 30 minutes. We tried standing at the door to remind him we were out there in the heat waiting for help. He abruptly announced over the loudspeaker that he was on a phone call and for us to get back in our car. He would come out when he was done. We waited for a while. He finally came out and attempted the code. It wouldn't work. He went in and got the key. It wouldn't work. He finally assigned us a different truck. He remained aggressive and rude the entire time. There were other trucks on the lot. Not 3 like he said. I will not rent from this man again. I will not recommend this dealer to anyone. The truck was delivered a day early to a location in Wylie Texas. Online documentation was done without difficulty.

The owner or manager was very rude. Although we understand that he and his employees had a limited ability to help with the issues we experienced getting the key, his attitude and tone were very unwelcoming and unpleasant. The truck we received had crushed fruit loops crreal left in the back of the truck, as well as a storage lid and chair seat. A bottle of Faygo and several napkins and tissues was left in the cab of the truck and not cleaned prior to us receiving the truck.