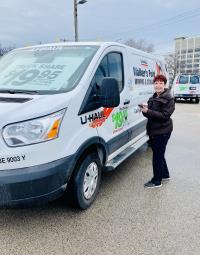 3 employees stood around while one gal hustled her butt off. (She did an excellent job, and she's the reason for 2/5 stars rather than 1/5.) My rental was booked and confirmed for 2/21, pickup at 530. They failed to leave the keys for me, so my family came to help me move and had to turn around. Inconvenience and delayed everything I have going on in my life. I spoke to the call center when the missing keys didn't make sense. Ariana confirmed that because the rental is guaranteed, and wasn't fulfilled on the reservation date, I would have $50 credit. They proceeded to charge my credit card After I spoke with them inside to confirm they would Not charge my card. If U-Haul didn't have a stronghold on renting vehicles, I would absolutely never use U-Haul again. Unfortunately, you do, and I probably will have to.

I ended up coming here from another U-Haul location because the first one was unwilling/unable to do a one-way rental. The facility on 1st Street was staffed by friendly, helpful, and knowledgeable people (in addition to being impressive in size, cleanliness, and features), while the rental location in Greendale only went so far as to help me reserve rental equipment at this facility.

The last two times they substitute the size of the truck on me. If you say you have it please don't give it to someone else.

I had an appointment to rent a trailer for 9am. When I got there, I had to wait in line for a half hour because they didn't have enough counter help. The trailer was not ready. It was covered in a half foot of snow. It would be nice if a reservation was ready at the reserved time? They clearly had indoor space to have cleaned the snow off of the trailer and brought it inside to be ready?? The Trailer performed perfectly!

The scan bar location that's supposed to be on the front of the building needs to be there for when people need to drop off after hours. It's a requirement from uhaul website.

The truck was filled with probably 100 blankets/pads we did not order that made our move difficult because they took up so much space in the truck.

Ramp was broke, movers didn't show up, returned the truck 15 minutes before closed but the doors were locked and employees inside just were looking as customers walked up.

Please give me all of my equipment that I order

Equipment was new and in good condition. Store seemed clean and orderly. Employees very polite. Professionalism questionable. Took far too long to get me keys to vehicle that was frozen and covered with ice and snow. I attempted clearing it myself but there was not a scraper in vehicle (in Wisconsin!). Ultimately a pleasant young man cleared it for me. I was the only customer in store and it was probably 25 minutes before I was on my way. Again, overall happy with vehicle I simply question management of that location.

Spent 10 minutes removing snow and de-icing the truck. At 4 miles a gallon, i probably lost out on two gallons of gas just trying to be safe to drive. Unit does not come with an ice scraper, which would have been much appreciated. Glad I thought ahead and brought a broom to clean out the back.

I reserved the truck online and was told the key would be in key box 14. After walking around the lot for 20 minutes I could find no key box 14. I went inside and after waiting Inline obtained the key. No furniture pads were in the truck. I told the employee and he told me to grab a pack outside. I needed a dozen and only found out later that only 6 pads per pack. The truck had a strong urine odor. Because we were in a hurry to complete our move we held our noses and suffered through the drive. When I returned the truck that evening the employee said that I had the stinky truck and it should be taken off the road. Thanks UHaul!

Customer service was the worst I have ever seen. Employees were rude and discourteous. The one even yelled at my 82 yr old father. I was given a truck with 1/8th tank of gas. The back was disgusting and even had broken glass all over it. They made me go to an area that they park the trucks so close to one another that you can't even open the door and it was extremely dark with very little lighting. The guy was accusing me of trying to get free stuff despite my already paying for the supplies earlier that day. Very unorganized and no customer service attitude. He even allowed someone else to come in front of me despite my being right there at the counter. He also refused to give me his name as well. The only one that gave us his name was Larry, if that was his real name. There were only two guys working when we came to get the truck

More staff, had to wait a half hour to get to the counter

Always clean the vehicle inside, no smoke residius, seat clean, desinfected. The appearance and clean cabin is very important for good business. The last two vehicle rented was terrible.

The person behind the counter was very friendly and helpful, however the truck was not clean. Also, I tried to do the contactless reservation and pickup system using the website and app, and neither worked. At all. I was signed in and had my confirmation number and everything and the app still said I had no reservations. This is nothing against this particular location, but for me on this occasion the entire digital presence for U-Hahl completely failed.

The trucks always smell like smoke. I wish more emphasis was placed on not smoking in the trucks. Otherwise my expierience was great and made better by the friendly staff

The drop off location was changed without my knowledge. I had to call to get it changed back to this location. Very frustrating.

Make sure the equipment is zip tied. We were asked if we needed equipment (furniture pads) and we said no. The clerk said we could use the ones in the truck free of charge as long as we brought them back. We didn't use them but the dolly wasn't tied and we got charged for it. Also, the truck was dirty and stuck of urine.

I placed an online pickup order for the next day. When I arrived there was no one behind the desk. I waited 7-8 minutes until a lady on her cellphone came out. She sat behind the counter and talked on her phone for 4-5 minutes and told me she would be right with me. Not only did I wait to be helped, but my order was never put together. So I waited another 5 minutes for her to gather my boxes. I was helped right away when returning my furniture dolly the day it was due. I got a call a week and a half later asking when I was returning the dolly, even though I had returned it a week prior. I was charged 66$ in fees for something that was not my fault. It was refunded and I usually do not complain, but after all of these problems I have decided I will not return or recommend this uhaul location. Unprofessional and unorganized.

The store was clean, well lit. The staff was professional and efficient. The truck was not great. My rental was on 1/1/21 and there was a snowstorm. The driver side windshield wiper was broken so I was driving through a snowstorm with very little visibility. Those rear wheel drive trucks are very bad in the snow.