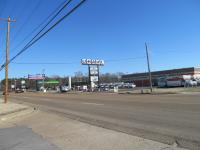 Truck broke down during use. Battery died.

Oder was confirmed and location was changed twice. when i arrived at the summer location i was told that the vehicle transport and appliance dolly were not available. when i completed the transaction and parked my personal vehicle i noticed both items that i was told were out of stock. The staff just wanted to close instead of serve a customer. i have videos of these items and have a compliant filed

Your computer system was down. Receptionist was pathetic with no customer concern or solution. All employees had zero initiative without any leadership. I was directed to call another local number in Memphis. Person there could verify my reservation even though I presented a paper copy. That person did a great job. Why couldn't the summer ave employee help customers by call the other number and assisting in confirming a reservation and getting customers on the road rather than saying â€œI have no idea when the system will come up and no reservations of equipment can be released. There were 4-5 parties all waiting. You all need more customer service training. Seriously, you can release equipment without a backup plan??? Really sad you run a business this way. Hire people who care.

I called the six Uhauls nearest me (1400 Audubon Point Drive, Horn Lake MS 38637 and was told by each they had no 6 X 12 enclosed trailers. No one had any advise as to how I could locate one and I needed it within 24 hours. I kept calling stores further away from me until I reached a transmission shop in Memphis who rented Uhauls and they gave me a phone number I could call where this trailer could be located nearest me. Wow. Why didn't the first 6 tell me that. I called the number he gave and they immediatley found a trailer about 45 minutes from me and told me to go on line and reserve it. I did and made an account and even checked in to expedite my pick up. When I arrived to the Summer Ave location, I was told I needed to go "somewhere else" to get a trailer because her computer system was down. I explained that I had already confirmed there were no other trailer around and really needed this trailer to move to another state. She could not help. I explained I had already checked in and had my confirmation number and Uhaul already had my credit card number and the amount of charge and could just bill it when the system came up. I again suggested she did call someone. Eventually she did and they OKd this so I got my trailer. But " go somewhere else"? Really? That was her first reaction? Like I was bothering her phone time (which I believe I was)

System was down. Online check in process too lengthy.

I was charged 7.00 for a dolly I never received and also charged for moving blankets 10.00. Total cost of 17 dollars.

This a great facility. Staff are knowable, and quick, even with the large volume of customer, in heart of the Memphis Metro.

I had a enclosed trailer reserved. When I got there I was told they should not ha e reserved it because they didn't have the size I requested. The lady offered me a smaller trailer. I took it because I was pressed for time. Some of the items I needed to move got rained on because they were too long to let the door down. The lady behind the counter was very helpful.

Rental was fast and easy. Streamlined check out was nice.

The rep was very rude. She never asked for estimated miles. She just charged the amount she wanted to. I tried to purchase packing supplies. I could not do to the rep saying she could not find the item in the system even though I had it in my hand. I even offered to purchase online. I still received terrible assistance. The Austin Peay location was the best service I have received.

Nothing, services was great

had to be put into another trailer because the one I had rented was damaged and not fixed.

Better customer service. Got back before 7 pm they wouldn't take truck back and had to do online and didn't know where key was supposed to be returned at. Took 30 minutes to find. Had to change card to pay took until Friday to get my daughter funds released. Will not go back again.

The trailer I rented is a 6'x12' trailer with a ramp. I needed it to move a 5.5' wide machine. The rear of the trailer has flair on each side that cuts in about 8â€. This effectively makes the trailer less than 5 feet wide. It did not work for my purposes and was a complete waste of my time and money. This should be part of the description on the website.

Talk to the customer properly.one of thepersonel named Jessica is rude.she is not in uniform and no mane tag.wnen I asked what her name is,she replied that she is not comfortable giving her name to other people..I got her name from other personeshe is rude and disrespectful.she is not suppose to talk to costumer

Tire pressures should be checked more frequently. The right side tire only had 10psi in it. I had to add air.

Truck wasn't dirty but it needs to be taken off the road for repair. I could barely keep it in the lane and on the road. There was so much slack in the steering wheel, it was VERY hard to keep it on the road. I was pressed for time or I would have exchanged it. Staff was very friendly and efficient.

I had to get a second trailer because the first came off the hitch and almost caused a serious accident. It may not have been completely tightened. Staff may need more training, or equipment may need more thorough maintenance.

My experience was so wonderful, that there isn't anything I can think of to improve the service! Everyone I came into contact with was absolutely wonderful! The equipment was easy to use and worked wonderfully!