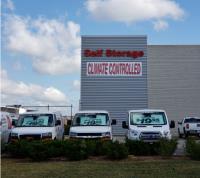 Make sure you give them the right truck. And not have me drive back to switch a truck in the middle of moving. And give me a truck that was really dirty on the outside.

The Two employees that were working were very knowledgeable and very helpful. The young man came out hooked up the trailer was very helpful and very nice even when we came back.

The service was absolutely excellent at the Melrose Park, IL location I was in and out with my truck so quick it felt like I was family borrowing a vehicle I can honestly say i don't know what you can improve at this location all the employees knew exactly what they were doing and what their job was and were all very respectful and polite

30yrs of Using Uhaul more last 12yrs as Contractor rental almost daily Melrose park Illinois fair helpful. Broadview ill Numbers may be good awful manager been there way too long and Comfortable time TO GO!!! Said this for 4yrs everything is reserved UHAUL FAVORITE SCAM! Last is Forest park Illinois TERRIBLE location no rear entry exit fights police just to pull out the store because UHAUL to Cheap to get Ordnance from Village for exit gate good numbers again Awful manager Older 15yrs younger kids get you in out No it's reserved game! Time to move her out !! this isn't Personal like or dislike!! just business This people look you in the eye and Lie Costing Our business money way out of line. So get going with your local Stores especially BROADVIEW Forest park Illinois. We depend on UHAUL equipment every other day is great if manager doesn't lie and say whole store reserved only to drive by 30min or all day on routes still see it there. Obviously we need to set up Corporate accounts mybe that would help I'm humble and thoughtful over years well no need! THERE IS A NEED also stop the Nickel dime mileage other Company's are giving 200miles free or free mileage altogether for longer rental!! LET'S GET IT DONE. Keith

front windshield was dirty truck was reserved online still took a while on picking up process. when I when back to return the uhaul truck there were no one at front desk it took over 20 minutes to show the person in charge. very disappointed.

Person who was working was super polite and helpful and when I told her what I was using the truck for she knew the information that I needed.

Called multiple times to receive more information, no call back even after leaving a message. Could not get the key out of the box and absolutely no assists or refund was given.

I NEED BETTER PRICES ON WEEKLY OR MONTHLY RENTALS

Every thing was efficient

Melrose Park location is great. Clareton Hills Location sucks, and the people there don't know how to help customers

Disregard for handicap parking from costumer's.

Stephanie in 758 Traffic Department deserves a commendation for excellence in Customer Service. The reservation I made on 8/6/20 for a 10 foot moving van at a preferred pickup at G&G Service on Belmont and Harlem in Chicago at 8am was unable to be accommodated so the pickup time and location changed to a time and location totally off my moving schedule. Since I had movers coming early on 9/1, Stephanie was able to secure me exactly what I had requested in the original reservation. She literally saved my sanity. Thanks to her, the move went off without a problem.

I AM THEIR MOST FREQUENT CUSTOMER. NEED BETTER PRICES AND CHEAPER MILAGE

The employees do a great job

reservation got all screwed up. I did not get the equipment I had reserved. Noone had ever contacted me.

I thought I would have to wait around for them to check the u-haul but they just had me hand off the keys and that was it. But it looks like I didn't get any additional charges so it works for me.