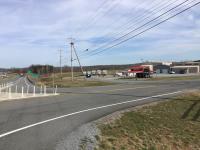 My husband picked up the truck early morning on a Saturday. He said the truck was not warmed up at all. I ordered 12 moving pads and only received 6.

My pick up location was moved twice

Good people to work with.

Return location on Indiana Street in Englewood, FL and the Attic Self Storage facility 102 James Street, Venice, FL we're both Exceptional to work with.

The people were nice but the rental is insanely way too expensive. 89cents a mile?? I could have hired a tractor trailer at $1 a mile and had someone else do the work. I'll never ever rent from Uhaul again

It was raining hard and the truck we used had a leak in the upper left corner near the cab and some of our things got wet.

Great customer service. Will do future business with again

The 4x8 trailer we were given leaked causing items inside to get wet. It definitely appeared to be one of the "original" 4x8 trailers UHaul had.

I tried to drop off at a different location as I was new to the area. I was treated so rudely by the man working there that I was talking to my wife about it for 3 hours after the encounter.

Nothing. The employees at Falwell was professional and friendly. I would go back and recommend anybody to deal with them.

It took a long time to rent the truck. I was sent to this site because they didn't have the size truck I wanted at my preferred site. The person was in the back working on a boat when I arrived and I had to go looking for him. None of the information was on the system that I had provided. I had uploaded my license and checked in online. After many failed attempts and multiple phones, the information was finally on the system. The contract was printed and signed. Then the person went to get the 24 blankets that I had rented to find that they only had 6. This became another big problem because he could not figure out how to make the change to 6. He called a supervisor and they said that I would get a credit for the ones missing. Total time waiting was about an hour. We went out to the truck and he opened up the back and there were blankets in many places in the back. The truck had not been cleaned from the previous renter. He told me to go ahead and keep the blankets that were back there without counting them. The truck itself was a fairly new one and in good condition.

Several issues, quoted me $1200 for a truck after I reserved it for $172, read my card number out loud, made us stay out late that night to bring it back to that location because they said we had to, then they charged me for an extra day!!!

Nothing the young man that waited on me was courtious well spoken and explained everything perfectly. Great doing business with .

The gentleman that owns the location was rude and aggressive about the insurance. Will NOT use this location again.

This is not a criticism of the pickup location (they were actually great!!). I made a reservation via the call center and scheduled to pick up the truck on Saturday, May 30 at 12pm. We had been driving for 4 hours and were a little behind schedule. When we called the call center to alert them that we 30 minutes or so behind schedule, they informed us that the location actually closed at 12pm. I was flabbergasted!! Why did the call center schedule me a pickup time of 12pm when the location actually closes at that time. If I had known that, I would have left an hour or more earlier. We assumed they were open all afternoon. We were put is direct contact with the pickup location and they graciously stayed late for us. We arrived at 12:20pm. But shame on the call center for scheduling our pickup the way they!!

Apparently the corporate scheduling is terrible because I made a reservation at one location then got a call the day before I was to pick up the truck and they told me I had to go farther north. The next day while on the way to get truck they called back and told me the 2nd location didn't get a truck for me so I had to go to a 3rd location farther west. Luckily they got a truck back in about 30 minutes after my original scheduled pick up time. All three locations explained how its a scheduling thing and is out of their control. Definitely not good for the consumer though.

Don't promise â€œwill callâ€ to customers if you cannot guarantee it.

We decided we needed a uhaul last minute. Made reservations, did all of the paperwork online so it was easy just to sign and pick up. Roger was very nice and explained everything. We ended up returning it early. Everything was great!

20' Rental Truck was in less than satisfactory shape for a 900+ mile trip. The mileage was nearly 96000 miles and at least one of the rear tandem tires was flat. The truck was difficult to drive and steer.

Pickup was at 12:00. I arrived at 11:57 and the guy was walking out the door. He said they closed at 12 - he was leaving without even calling me as a courtesy. I had also called the day before to confirm and was not warned that they closed at 12:00. Had I arrived 5 minutes later I would not have been able to pick up the truck. Ridiculous

Customer service complained about not getting to eat his breakfast because he had so many appointments. I had been quoted differently than Kemper St and he made comments about how they didn't care about their work and he hated going over there unless he was changing out a tire. He also said he was not run well and didn't understand how they could still be opened. He did give excellent tips about returning the truck clean and making sure it was fueled up properly.

Good staff. Knew what they were doing.