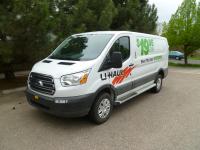 This location was very poor when dealing with them on an issue that I noted at pick up on the pick up form. The person who called me on the phone was very rude and even when customer service called them they were unhelpful. I have rented from uhaul many times and I would not rent from this location again.

Just keep doing what your doing

Maintain your excellent service so that the next customer will be as satisfied as I was and I am. I will recommend this location to family and friends. I also plan to use this location again.

We were attended to with despatch. In this one hour rental, everything was concluded without hitch.

I tried calling in Tuesday regarding this experience. It was the worst and I will definitely not use that location again. The gentleman in this office needs to take some customer service training. Thanks!

This location is not corporate. The person running it out of the space also runs 5 other businesses. So when you are there he is trying to take care of more than one customer at a time. If you rent from here in the future, make sure you have a buffer of time from your pick up or dropping off, it could take a while.

The owner was very kind to me. Truly grateful for his help and consideration.

I was taken advantage because I'm a woman . The guy was not fare at all . I will never give my business to uhaul

The owner or the person who assisted me was rude , I say â€œgood afternoon â€œ when I get there and no reply from just ask me what I want , then he told me that he close at 7 pm I get back at 6:50pm and when I try to get inside the door was locked he just make me sings from the inside saying â€œgo go ,â€ basically just make me signs to leave no like it was close just to leave , I feel that was rude again . I definitely will not recommend this location , I used you guys before and every time they were polite and helpful this gentleman here is not .

the UHaul At cloverly automotive wasted our time and money. We booked the truck online but there was no way for us to get the key. Because of them we incurred additional charges because we were not on time to pick up and drop off items. Glenda a U-Haul customer service rep was so helpful and rebooked us at the Laurel UHaul. Chanel another UHaul Report found us an open and close location. Hats off to them!We have been offered a $50 reimbursement but I would feel better if it were $75. The Laurel U-Haul - Peak Business Services was fine. No problem getting the truck.

Hate the, bring gas back at level you took it. It is nearly impossible to gauge. You already charge by the mile, add twenty cents and include the gas. Guy in the store was nice enough, but got argumentative when I told him the gas didn't read 1/2 tank when taking out.

While the van was relatively clean and usable, the mat that covers the storage area of the van needs to be cleaned. There was some type of sticky substance on the black mat. Just needs to be sprayed down and possibly scrubbed with soapy water. (my speculation).

I wasn't the one to drop it off at the location so I can't rate it, however... The only issue we had was the gas gauge. Currently in dispute as the contract says it was 7/8 full upon pick up, however, my husband took a picture of the gauge and mileage that shows it was less than 3/4ths full! My brother dropped it off at 3/4 of a tank but we're being charged $53 because they are saying it was only 1/2 full. Either the truck is leaking gas, or there is a faulty gauge!! Still waiting on a call from a manager...

There was garbage in the cab and old shoes in the bed of the truck. I would make sure someone goes through the vehicles to ensure they're clean before the next user.

The van I rented didn't have any brake lights and I was pulled over by the pg. County Police and given a warning because it was a rental. I purchase bulbs to change as the location as closed and didn't want to be driving around with no brake lights.

Nothing, my experience was excellent.

I rented van at 12pm returned it at 11:57pm couple days later. Very disappointed that the rep entered the return at 12:31pm after he was done with a customer who was there for another service entirely not related to UHaul. If this is not remesied and i get the extra day refunded, I would like to request that all my information be deleted from U-Hauls database as I will never use uhaul ever again. I was just getting ready to start in corporate account because I would need a lot of rentals but I'm ready to go with Budget Rental

The location was extremely cluttered. The man at the front was extremely rude and very turned off. It was as if he was unhappy that he had a customer. I showed up a little early for my reservation and he told me they didn't have a truck there while it was sitting outside for me and then told me there was nothing he could do and said GOODBYE to me. I just couldn't understand what was going on.

The truck was not clean (the cab was dirty and the cargo area had dirt and what appeared to be red mud in the rubber floor mat) and smelled strongly of cigarette smoke.