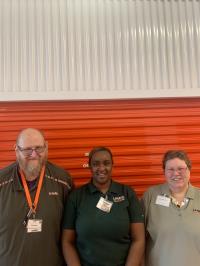 My rental agreement stated that my cargo van was due back at 10am the next day. When I returned it at 6:30pm the night before, I was charged a $20 fee for 'after hours' check in. BEWARE of this BS gouging!

So, I made my reservation online, but when I arrived I was told it was "moved." I went to the new location, it was closed. No help at all on the 800 number. Needed a 15' box truck, ended up with a filthy pick-up. Will never rent from Uhaul again.

The staff was friendly and helpful but absolutely NO ONE wore a mask and the truck we rented was covered in finger prints, the center console was sticky with god knows what, and it reeked of smoking. I have a kiddo in heart failure and was really bummed no one wore a mask and with how dirty the truck was. It took me even more time to wipe down the whole truck with wipes I had brought just in case something like this happened.

Dont be rude to your customers... the old lady has zero customer service skills.... the first thing out of her mouth was "Your Late!"... for the record i was 45 min late due to being sick all nighy and only getting 4 hours sleep... but having entered my credit card i assumed i had paid for it... but rather than being customer focused she decided to be a bitch.

I had returned the uhaul truck early do to after loading my first load (furniture) the truck wouldn't start for over an hours. So therefore I was unable to use the uhaul, I had to call someone else with a truck to help me move my furniture and once that person arrived the furniture was unloaded and placed on their truck. Once that was done my I noticed my furniture had been damaged by the dirt and oil within the uhaul. I let the person know all details of this when I returned it but still I was charged full price for no even being able to use the uhaul, it was as if I was charged to test drive it. I'm very upset and feel used.

It was better than I expected. thank you sooooo much

We were charged a $25.00 cleaning fee when it was cleaned before we brought it back. If this is how we are going to be done we will go somewhere else next time

Upon my arrival the customer service was horrible, both employees where not friendly. They where very mean, and made me feel so uncomfortable. I had to walk across a very dark parking lot and get my own truck in the dark, very unsafe. The truck I had broke down with my child in the the truck. I call uhaul they didn't show no concerns or consideration. They told me there was nothing they could do for me. I wouldn't send my dog , cat or friends family etc ... the way the woman there and guy treated me.

Good job and know of nothing that needs changed.

Nothing at all and I'm glad to see that the staff are doing ok.

The general manager acted like I was interrupting her. She barely acknowledged I was there. They were doing something with what I guess was storage unit assignment availability (don't really know just guessing) then the general manager the was complaining about traffic sending trailers her way. The second gal walked out the front, turns out it was to check in the trailer attached to the back of my truck. I was now informed of this. Then the general manager (very gruff) told me folllow the gal outside. I told the gal outside to apologize to the general manager for me interrupting them by showing up. I told her I was sorry for using uhaul services and I won't do it again. At least not at this location. If I need to rent or return it will be at another location or I just won't rent at all. I know when I looked on Google before I arrived to make sure I had the correct location (maps) it displays a few yelp reviews about the place. They all said the same thing. The lady at the location treats people badly (attitude). I took this with a grain of salt. Well I'm here to tell you they were spot on. Wow what a great person to be the face of your company.

Improve the customer care because some of us are doing this for our first time and may not know everything.

Don't have to go in for return just pull up and someone comes out to help you with the return, very efficient and easy

Truck was not cleaned on the inside. I didn't have a choice, only pickup truck available at the time. Truck should've been cleaned and sanitized due to pandemic.

When I was there, a larger semi moving truck was blocking the spots where cars could park to load/unload. So maybe have an area where large trucks could park or another car parking area.

Everything was good, I came in at the last minute on a Sunday to get a pick up. The guys in the office were very friendly and helpful. The ONLY downfall was the truck smelled of cigarette smoke when I got in. I definitely don't smoke, so I am sensitive to that. But I aired it out as I drove with the windows down a little. I returned after hours and it was very smooth.

The location was a great. I've rented from them several times. The van had a quarter tank and the gas cap was left open. It was at the front of the lot and the key was in the store. So even though we did mobile pickup, we still had to wait in line and waste 20 minutes of the 3 hours we had. The van was across the parking lot from customer parking and the building. Which doesn't sound that far, but it's a huge lot. So it was a hike. Again, this location and the people are exceptional. Your mobile pickup is ridiculous and a waste of time and mobile pick up van was not in acceptable condition

The gentleman who was there was very customer service friendly and very professional. But made my experience very pleasant. I will always come back to that location due to the experience and service that I received. Keep up the great work.

If the employees would show up to work on time it would be nice. The young lady was still taking her coat off and balancing her cash drawer at 9:20 while we had a 9:00am reservation. We did not depart the location until after 9:30 causing us to be late, our being late caused the person we were meeting to buy furniture from to leave a call the deal off. Thus we spent $75.00 in rental plus fuel plus hours of our time for nothing. Thanks U-Haul