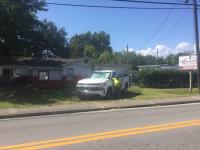 Thank you for your professionalism and courtesy!

The truck was filthy inside and also smelled like smoke upon my picking it up. There was no rental office and an employee spoke to me through a locked gate and said he couldn't rent me the truck. He said I needed to speak with U-Haul to get a code from them for the lock box that had the keys in it for the truck. The whole process was a nightmare because I had to contact the original location that I had done the online rental reservation with in order for them to contact the corporate office for me in order to get the code. And the original location was the one that I had my original online reservation with that didn't have a truck ready for me and referred me to this other location and another city. There's more I can add but I'll keep it at that for this review.

The workers were very rude when I came to pick up the van and it is located in a alley-like location where you could not see other UHauls, so I had no idea. The Uhaul place in the next block, Carter Uhaul had a big sign out front. I went there first. The man was a little nicer when I returned the van, but not much. He does everything on his cell. LG

Horrible experience. 8am reservation, I get there at 8:15 to hear about how stupid uhaul corporate is because they don't open until 9. So I sit and wait for the guy that just left in his tow truck to return because he's the ONLY one who can do it. 8:45 we get through that process, only to get outside, in some unweeded, rocky, concrete fill dirt lot when my trailer is in the very back. I ask the guy if it's even safe to back my truck up there. He struggles to get it on the hitch. When I return the trailer, no one is there to help me. I'm told to "just unhook it and leave it". Again, it's very hard to get off my truck since the trailers don't have any Jack's on them. Just a poorly run place!!!

Location was in a car towing yard. Because of this, the location was completely enclosed with 8 foot fence with barbed wired across the top. Could not find how to get in and all the windows had bars on them. After walking around saw a small sign on one windows for U-Haul and knocked on the window through the security bars. The window opened and the gentleman asked us to go to the gate and he would open it electronically. Upon entering the house, I realized it was the office for a towing company. All of the windows were dark with tinting and all the vertical blinds were pulled shut. I felt very uneasy. My wife opened one of the vertical blinds to get some light in the room. While we were being checked out, the gentleman took 6 calls for his towing company. It took us approximately 45 minutes to rent the truck. He also told me the truck we rented was from a "repo". Evidently someone had not paid and U-Haul had contracted with him to get the truck back. Overall I was very uncomfortable with the rental process from that location and if I weren't in a hurry I would have left and rented somewhere else. That being said, I don't think I could have left because the electronic gate was shut and my wife and I felt locked in...literally! I would not recommend this location to anyone. I could not imagine my wife or one of my girls renting from there for fear of their safety. Please call of you have any questions about this rental. We would be glad to discuss it with you.

Had a GREAT Experience for my move! i highly recommend Volusia County Towing & Collision to anyone who needs a truck... they took care of all my needs and made sure i had everything i needed for my move

This Uhaul location was very hard to find, I drove around for 30 minutes looking for this place, & the only reason I was able to locate this place was a truck pulled out & I just happen to discover the sign, which was so small that other people would of had problems finding this place, after I found it, I looked across the Ally way & that's when I seen all the other U Hauls parked. They did not have a sign indicating that it was indeed a drop off location, very poor!!! there was no drop box to put the key in, so I called & was told to leave the Key under the Mat on the drivers side & the passenger side door unlocked, I was vary worried about doing this, cuz just anyone could of just walked up & just took it & I would of been paying for it.

I did not actually go to this location, my friend did. He and another guy said the location seemed sketchy and was not in a particularly good location. Best to go during the day if you plan to use this location. Just our humble opinion. No offense to the UHaul personnel...they were pleasant.

I had a reservation and a truck assigned to me the day before my pick-up time. they saw they could make money and rented my truck. VERY POOR SERVICE I WILL NEVER DO BUSINESS WITH U-HAUL AGAIN BECAUSE OF THIS. 3306039007

Everything, with the U-Haul was good!