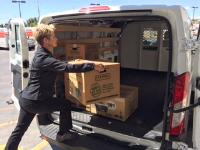 My move went exactly how I thought it would. This UHAUL facility was great. Thank You. When I returned the truck the night shift was better than the day shift.

Enjoyed the online process and the phone app. Love the new technology. Your pricing for the rental was great. Truck was not in good condition. As soon as you went over 50 miles an hour the entire truck would bounce really bad. Made it work. The staff was not friendly and treated me as if I was an inconvenience. Was happy I was able to get a truck and got the move completed.

The previous user had returned the trailer with lots of stones that would have dropped out onto the highway. When I pointed it out, my helper was happed to blow out the trailer. I would definitely rent from this location again. This same helper flipped the 2â€ ball on my receiver hitch so it made for a more level tow.

This Facility is very organized and efficient. great experience

Not much. Best C/S in a very long time.. Thank you John!!

Still waiting on my balance to be refunded

We received a dirty; couldn't see through the windshield, the steering wheel was caked with sticky something, the steering column didn't turn well, the brakes didn't work well, the inside was dirty (floor was messy) the outside of the truck was dirty. The wipers didn't work well either. We also were put down to pick up the u haul at 1:00 but we scheduled it for 10:00 am. We had to call to confirm. IF we didn't, we would not have gotten our U-haul at the time we wanted. We were told at one U-Haul place that the one we reserved came back "brake lines were broken" so we had to use a different U-haul place, You guys have to think of the customer's safety and not just give them what is available WITHOUT a safety check first. Get the vans maintained people! This experience was not acceptable and not safe. I won't do business with you ever again.

Check the tires - I thought they were in good condition when I p/u. In the daylight one had badly worn tread & one was damaged, had splitting in the tread; and had a nail in it as well.

This is the second time I rented from this location. The first vehicle was great, rode and handled well. The vehicle I got the second time, had a lot of play in the steering wheel and the transmission was slow to pick up. Other than that, the staff was extremely professional, friendly and helpful. I will definitely use the service again, it takes the stress out of moving. Great location, as well.

The associate who assisted in my rental lack training. Also, the truck had mechanical problems.

I (for USPS Henderson Offices) rented a total of 12 vans for our PEAK Season, from 5 different Uhaul locations. Uhaul representatives Andrea, Brittany, James, Michelle, Javier, and others, were all courteous, professional, and knowledgeable. They streamlined the entire process, and promptly responded to any issues and questions. The roadside assistance was also excellent. Thank you !!!

dolly was not properly fixed which was noted in the system. one of the turn signals came lose in the middle of the night while driving electric wires cut the power. called the service was told to wait in the middle of a freeway. decided to stay safe and off freeway went to the store spent 12 dollars to fix the light to make it home safe. contacted the uhaul with my story the next day-no appologies, no reimbursment. told them i can fix the light right way-was told not to dare as they have professionals to do it. i have pictures of how professional thier hands grow out of thier behind.

Was given a truck with check engine light on, had to switch then, when I stopped for gas, checked the oil because car felt weird, and oil was almost COMPLETELY EMPTY! had to spent $40 in oil so the car wouldn't break down. Then called customer service to let them know that they need to check the trucks better, and all she did was transfer me to roadside, even though I didn't need roadside at all, I was just calling to let them know the car had no oil and I was very upset since this was over 8 hour trip and I could have broken down. Overall will never rent a uhaul again. The guy who returned the vehicle was nice and helpful but doesn't make up for everything else.

Great morning and easy checkin with the app all by myself.

Your staff did an excellent job with our rental. We were very pleased with the experience.

The whole experiment was fantastic. We even made changes to the reservation and everyone was accommodating. Both the pick up and return were quick and easy.

This is the third time I've used this location in the last year. Each time, they overcharge, or attempt to overcharge me. I spoke to Adalia about my last experience, but it didn't matter. Same frustration dealing with the employees, with the exception of the African American man that helped me during equipment pickup. He was very helpful. Otherwise, watch your invoice closely. They will make a mistake in their favor. I'm still waiting for my refund for the appliance dolly that they double charged me for. June was supposed to take care of that the day I returned the equipment.

The bill still wrong. I rented for $39.95 plus miles. I never open the blankets bundle but was charged for it. Thanks