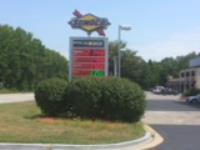 Dirt in trailer. No electrical cord; had to take one from adjacent trailer. Had to hook it up myself. Minimal help from store clerk.

None, every thing went smooth with no issues.

The cost was higher than expected. I paid total $95 though the website information lead me to believe I would be in the $40 - $60 range.

I reserved a truck. Showed up and they didn't have it ready. I had to call uhaul because my reservation didn't exist... Even though it did

Pickup was a little slow with the cashier assisting other customers at the same time he was trying to finalize paperwork for me to take the truck. Truck's air conditioning was non-functional, which was somewhat painful given the temperature that day, and the padlock on the back of the truck did not open. The key provided went into the lock and turned, but the lock wouldn't actually open, forcing me to use string to tie the latch shut on the cargo door to ensure it wouldn't open during transit.

I used this location because it was nearby. Utilizing the online process made the in/out aspect relatively simple and quick. Recommend not to purchase equipment via the online option. The facility you request it through might not have it or just won't prepare it to order. Overall, excusing the mishap of not having my equipment in my vehicle this location was convenient and simple. Just be cautious and thorough when inspecting your request.

Have someone more experience running out the equipment. And making sure the equipment is maintained properly. Upon returning we we're in formed there was no brake fluid by the returning location in Port Richey.

The location of the Uhaul trucks were in a very small parking area of the gas station. I elected to pick up the truck by mobile because I thought it would be a very efficient and safe alternative then going inside. Well I was still prompted to go inside the gas station and the attendant was sort of confused by everything. I would not recommend the mobile app or this location due to lack of communications.

I think it's sneaky to charge a customer a processing fee after the rental was confirmed...unprofessional!!

The location was average in my opinion. It's inside of a convenience store so, it's a â€œone man showâ€. The clerk that assisted me attempting to multitask by handling my matter while also checking customers out at the point of sale up needing to purchase items from the convenience store along with gas. It was awkward and just like I had no privacy to handle the purpose I came there for. It would be nice to have a little privacy and that, as a customer, an associate gives me their undivided attention. To top it all off, my truck was filthy on the inside and smelled horribly.

A little pricey on the mileage cost but overall worth the rental.

I had a horrible experience.

Improve communication and customer service/support from representatives. Have someone available to physically assist with hookup. Location not suitable for trailering.

My pick up went well, the online pictures did not match the truck accurately, and there was some stuff in the cab as well as what appeared to be a grease or oily stain on the passenger side floor. The location of the pickup and the personnel working was fine.

First of all it took forever to get the truck. They had one person working there. They had me and another customer getting a truck and had to stop for every person getting gas and any merchandise. People getting gas were pumping gas for 30 mins waiting for the gas to flow out and there response was it's cold and it comes out slower. My reservation was wrong and tried to charge my credit card before telling me how much my card was being charged. The price isn't what I was quoted. had to get on the phone with the place where I originally had the reservation with and they fixed it and was very helpful. not to mention my reservation was changed 3 times, 1 because they didn't have the size truck I wanted which was a 20 foot they didn't have so we went down to a 15 foot at another location then they text me 30 mins before my pick up time to the location above and was there an hour before getting the truck. The only thing good about this truck rental was the drop off location in Winchester va.

Trailer wiring was not correct. Continuously blew fuse for running lights throughout trip. Door also unwound and could not close mis trip

He did not tell me the actual price. He told me the price of it as if it were a pick up and return at the same location. I did not realize I was spending 510 dollars instead of the 30 dollars I originally paid. I am still waiting for UHaul to provide me the refund I was promised seeing that I was told the wrong price.

The location itself was fine but U-Hauls reservation system as a whole is terrible. I did not even book this location originally...this location is about 20 miles away from the location I originally made the reservation. And, my pickup location was changed 4 other times in between the original booking and the actual pickup. This is horrible.