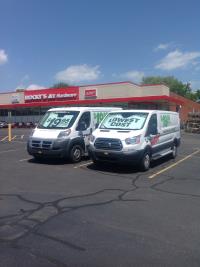 My rental from this location was flawless.....I don't think they could have done anything more, unless the drove the Truck for me! TY Rocky's in Greenville, RI

We didn't have any problems, but our van did say that it was time for an oil change.

My bill was incorrect, I was charged for gasoline when in fact I filled it to slightly above the level at which I rented it. In talks now with a â€œresolution specialistâ€œ to resolve. Used them before with no problems though.

Instructions regarding location of key.

Took 1 1/2 hours to get the truck once I got to ace hardware.Girl inside could not hurt been any less accomadating

The online pickup took forever to the point where I had to go into the store and ask for the keys which they couldn't find. They had to make several calls to get my reservation switched to another truck and make sure that there weren't any padlocks on the back gate which they didn't know the combinations for. When I got into the truck it was only 9/16 of a tank full of gas which I took a picture of and went back in to let them know. They said no problem and it's in the paperwork. My schedule pickup was at 9 and I ended up leaving around 9:30. Upon returning the vehicle and having it inspected there was a $35 charge for fuel. I had gotten fuel and filled it back to 3/4 full before dropping it off. When I asked about the charge and explained that had taken a picture and showed it this morning they had to make yet another call. The clerk said she didn't know how to change the mistake and Manny at UHAUL told them that I would be reimbursed the fuel amount and I am waiting in confirmation of that. I will be calling his number in the AM.

Dirty front n back..drove to location to use..back door wouldn't open..response from vendor was "I don't know what to tell you"lost an hour and a half..had to return unit so they could bang on door til open..they acted as we inconvenienced them..offered no adjustment..had to speak w manager to adjust return time..will never rent there again.

the best in the area+

First of all I want to say that the people at Rocky's were very nice and they were thrown into this at last minute, and I was really pressed for time. That is why I would recommend them. I originally reserved an auto transport trailer from the North Smithfield Uhaul center. The people there were very nice also. After we did all the paperwork inside, the nice young man that did the paperwork went with me to hook up the trailer. We found the tires on left side were nearly bald and one had a slice in it. Because I was planning to trailer automobiles neatly 1000 miles total I was not comfortable taking this one. They did not have another one and they did not have any tires they could put on it. I thought it strange that a large center like this would not stock some replacement wheels and tires for their trailers. They checked and found out that Rocky's had one. This meant that I had to drive 20 minutes further away from where I had to pick up the car I was going to tow. This put me quite behind in my planned schedule but I had no choice at this point. At Rocky's nobody They were pretty busy an nobody came outside with me to assist or inspect the trailer. The tires were not very good but better than those on the one in North Smithfield. I discovered later that the directional lights did not work properly either. When I put either directional on, both rear lights flashed. This made me nervous but I couldn't do anything about it then. During The rest of my trip I was very careful when changing lanes to be sure those behind me knew I was turning. Thankfully all went well. Overall I was disappointed with my experience with Uhaul because of these issues. I own an auto sales business and we are doing more and more out of state deliveries. I was hoping I could count on Uhaul when we needed to rent a trailer, but I am not sure that I can. I would appreciate your thoughts about my experience. You have my cell number and you can call me if you want to discuss this further. Thank you.

I was unable to use the self dispatch successfully due to the website being confusing (other customers were confused as well and also waited for assistance). I proceeded to wait 35 minutes for service which was mediocre. The person who does the u-haul dispatch was late to work 25 minutes! She never apologized for her being late. There were key issues and someone rented a truck to me that was reserved for the store. Other store employees did apologize for the wait prior to her getting there. This hold-up impacted my moving process and the 5 other people who were waiting in the cold for me back at our starting point. I was already disappointed that I had to travel over 20 miles to get my 20-ft truck when plenty of u-haul locations in and around my starting town.

Long line to get truck and return truck. Prompt service once line was gone. Friendly and helpful.

Worst UHaul rental ever. Outgoing mileage and gas reports were wrong. Pointed out to Rocky's Ace Hardware, the rental location. They didn't update their paperwork and then tried to overcharge me $50 for insufficient gas because they didn't write down correct numbers. Gas was correctly refilled, good thing I took a picture. Always surly, barely competent lousy service at this location and I've spent over $1000 renting UHaul trucks here. Last time I'll do business with Rocky's Ace Hardware Greenville, ever.

Just dropped off truck no real dealings with anyone

I have rented a van 3-4 times in the last month at Rocky's Ace Hardware . This time in Monday morning at 8:30am the van still had junk in it left by the previous (weekend) renter. I found a very large aquarium up front between the driver and passenger seat and junk in the cargo area. No employees around so I marked "ok" on the mobile app and through the stuff in the dumpster. Employees should clean the vehicles BEFORE they are due to rent out!

Can't think of any improvements,

Have rented several times from this location,,always a smooth, easy transaction..

I tried the phone app for pick up and return and it worked great! Plus, I avoided having to pay a credit card fee!

I'm getting tired of paying a hefty percentage fee to be able to use my credit card!

Everything was great it all aspects!

This was the first time the equipment had been unclean. Normally there are no leaves in the cargo area or dispersed food around the cab. Facility is excellent. Previous customer didn't do their part.

None, it was perfect

When I picked the truck up it still had the trash in it from a previous renter. Before returning the truck I cleaned my stuff as well as the garbage left behind by someone else. I noticed there was no walk around to look for prior damage with an employee before leaving with the truck so I took pictures with my cell phone. Employees r very nice.