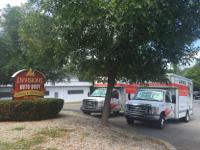 No one on premises! Unhooked trailer and left it on site.

It's not actually the fault of the location. I am dissatisfied got that location was not available to help me through the check-in and check-out process. Doing it online is not simple. Had to go to that location because the Hamburg Street location screwed up my reservation called 4 days in advance got there at 8 in the morning and they claim they couldn't give me the truck I wanted and I would have to wait until 3 p.m. . Not an option. Finally got another truck but that location was closed and it had to be done by the computer. What a joke

I called Uhaul when I went to pick up the cargo van and spoke with someone about upgrading to a bigger truck. I was going to pick up 2 pieces of furniture in Boston, MA and did not take into consideration the wheel wells when booking. They told me there was none available in the area, but that I could switch the van for a truck at my location. When I tried to do so, I was told I would have to return the cargo van to NY before I got the truck in MA, which made no sense. I called customer service who gave me the local 518 dispatch number, which I called. I explained the situation and told them I was told on the phone that I could switch, otherwise, I would have NEVER taken the cargo van. Dispatch called me and said they would pull the call logs and call me back. They did and said that even though the woman representing Uhaul told me I could switch, I can't, and I should have known this when I signed the contract. She was rude to me. I told her I wanted to speak to her supervisor and she said he was in a meeting. I asked that he call me when he got out of the meeting. She said it wouldnt be until next day. OK? I asked for the call, but the call never came. I decided to take one of the two pieces of furniture home to NY in the cargo van and will have to go back to pick up the other piece which I had to put in storage. I know I am only one little person and UHAUL is a giant company, but this was very disappointing to me. Karen Miltner

I used my phone and website for pick up. No complaints about the location because I didn't have any contact. The website was horrible, had to repeat steps multiple times, had to call customer service. I would have rather dealt with a person.

The website needs to be updated to specify that you are not permitted to do counter pick up right now. That a smart phone is required to reserve a vehicle and will be needed at pick up and drop off. You also need to specify that there are numerous forms of identification required at the time of pick up and you must have them with you to photograph.

The system for picking up the truck using your phone is TERRIBLE. App glitchy and time consuming. Took 10+ minutes for approval and 20+ minutes for the whole process. Bringing the truck back was not any easier. Also took over 10 minutes

The windshield wipers were falling off and put me in extreme danger. I demand full reimbursement for this trip.

Always a great experience. Change nothing!

Gas was lower than 1/4 when picked up

uhaul truck share, horrible experience, was a nightmare from pick up to drop off. Staff on the phone was nice enough, but unable to help me. Took me 3 hours to drop the truck off. Just horrible.

When I went to go pick up the UHual they attached the dolly to a different truck. So I had to call for a refund. I then went through the process with the mileage and it was off by 2,000 miles. I had to recall customer service for them to fix/note it down. When I returned the truck they tried to charge me around $1984 for a 25 mile drive. Luckily the guy at the UHual was able to sort it out. It was just a stressful experience.

This was the worst place to pick up. I stopped by the day before about 4:15 pm they were closed. I called and left a message that I would be there around 8-8:15 the next morning for pickup. On pickup day I arrived about 8:10 to find the place locked up tight and doesn't open until 9am although my reservation was for 8 am. Was on the phone with uhaul for over 40 minutes and left the location about 9:15 am and still no one from the location on site. Why would uhaul continue to use locations like this is beyond my comprehension.

Just use Uhaul.. best retailers in all Schenectady and Glenville area.

First time picking up a truck with Uhaul share. Way too long waiting for the approval on line. Drop off is easy. I would like to see periodic interior detailing/cleaning. Although generally clean, the floor and cup holders were dirty with food and spilled drinks. Pictures will not capture this.

Nothing. The transaction was smooth, the hook up of the trailer and instructions were great

Looked abandoned - not a real business?

The Colonie location was absolutely awful. I will never recommend that spot. However Glenville was polite professional and courteous

Got the run around trying to set up the original pick up. Had to keep calling back because they left messages. Very inconvenient, especially since this was a domestic violence situation.

Make it clearer that when you change someones rental to a location that's closed, that they have to use the 24/7 mobile option. My rental was originally supposed to be in Clifton Park and then it got changed to Glenville. The Glenville office is closed on Saturdays so I was initially very confused and upset. You also need to make it much clearer on the website that the screen with your "completed" rental agreement isn't actually guaranteed until you get the text message. Again, the website said I was set in Clifton Park, but then I got a text message 30 minutes after making the reservation that my van was reserved in Glenville. Was upset to say the least. Very average experience overall.

Actually make an effort to get everything in the same location especially after spending ample time on the phone organizating things. The customer service was horrible and made things way more difficult than they should've been. I would like a copy of my conversations, I know they were recorded and the person who emailed me saying he/she listened to them obviously didn't. I'll be contacting BBB about the time, stress and money of mine your company wasted. It really shouldn't have been so difficult, if you had competant employees.

Mobile app kept shutting down when trying to submit my photo for verification. Worked fine on another phone so may have just been a glitch with my phone.