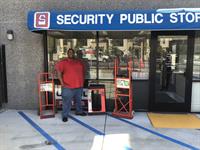 Great spot for me and the service is good. Only issue is that the parking spot is small. May not be too good for bigger trucks.

The service was great - the person working on Saturday was very helpful and patient with me. I really appreciated all his help!

Personnel and facility were fine other than finding out at last minute that i needed a cell phone to check out van. Mobile app was down and apparrently employees get in trouble using the computers they have access to to rent out equipment. Rediculous policy. Fix it!

I was charged for another day eventhough the truck was dropped off prior day. I spoke to a guy named Eric and said he couldnt do anything for me. I called customer service dept and spoke to a girl named Vanessa couldnt help me either. Both of them are just passing me around and was not credited of anything. I was charged about $300 on my credit card to which it woud have only been about $170. I have rented a truck 6 times in the month of August 2020 with your company and do not deserved to get ripped of like this. I could have gotten a phone call from this guy Eric to verify if i am keeping the truck first in the morning of Sunday before he had pushed the charges for another day. I am very dissapointed and to top it off the inside of the back of the truck was dirty and there is something wrong with the engine of the truck. When it down shift when i am slowdwn approaching a signal light or stop sign theres an impact pushing me forward as a driver and my passengers that i almost hit my head to the steering wheel. I need a phone call to a higher level management of uhaul to discuss this horrible experience. My contact number is 626.560.8569 and my name is Jonathan Tadle. Thank you.

No assistance. Have to find vehicle yourself. Window so dirty made driving difficult. Lazy staff.

Walked in to move some furniture had reserved a cargo van and when I arrived I was immediately dissatisfied with the service. The door was locked and initially i thought it was closed then a heavy set man comes and unlocked the door. When he finds out I did not use the mobile pick up option through their website he states " I have to call the regional manager." So far the associate sounded confused and disorganized. He talked on the phone the entire time not only with his manager but with other customers as well. He joked about the customers on the phone complaining to us about them checking on the order. Saying things like, "same lady calls every minute, crazy" while laughing it off. He also says "yeah uhaul sucks and I just cant wait to go home." I canceled my order and redid a new order and selected the mobile pick up my app however was stalling and kept reverting back to the main page. He tells us to walk outside where the cargo van is I thought he was bringing the keys and meeting us there. Unfortunately we waited out in the back parking for at least 20 minutes. He walked very slowly kind of swaying jokingly while walking. He was talking to the customer I referred to earlier the woman and while he is on the phone with her he hits his head on the cargo van repeatedly as if to imply this is a nightmare taking care of this customer. He finishes his call after a little over 5 minutes and I asked is there anything I need to sign and he says "what I've been waiting for you?" So we end up going back inside he talks to some manager named Gary and is being just rude while rolling his eyes on the phone and making head movements like yeah I got it. It was altogether a terrible experience and I will not be coming back. This whole thing took more than an hour. The only nice thing I have to say about this place is the woman I met with when I dropped the keys off was professional organized and was very informative complete opposite of the guy I spoke with earlier. Besides all this with millions of people losing their jobs and getting sick wouldn't you be even more grateful to have a form of income coming in and that you are healthy and safe.

Took over two and one/half hours from the scheduled pick up time to get the vehicle. Significant difficulties with the mobile check out procedure with local willingness to assist however minimal knowledge of system and trouble shooting. I doubt that I will go through the process in the future.

Checked in the night before but arriving to pick up the truck found out I had to check in again through the internet. The process was a complete mess and it took 1and 1/2 hours to finally get the truck. I had movers waiting for me and that was a big problem. I know there is the virus issue but there needs to be a better system or none!

Check -in for truck rental via the app took an hour. Way too long. I have been charged incorrectly and it is difficult to get it resolved. I will not rent a U-Haul truck again if I can help it. It is a horrible process and I'm very dissatisfied with the service to resolve my charges.

Staff was not helpful, truck was dirty

Pretty strange during lockdown, but love this location

Megan was very helpful and made drop off quick and easy. Would recommend.

My family can't afford what we were charged for this rental and the bill is at minimum unconscionable given the situation. My wife has immune issues so the dr. Has ordered us to stay home, going to a gas station with tons of people is basically like risking her life right now. This entire national emergency caused every source of income we have to shut down which also impacted our ability to bring the equipment back on time. Not sure what this safe move fee was or how your website added it (by the way the process is very deceptive adding new products constantly forcing the user to catch them). Anyway I'd like to see someone at Uhaul corporate show some compassion and adjust this bill dramatically.

There is NO PARKING here for your car...

Both workers were very helpful

Megan was great to work with. I will come back when needed.

Picked up uhaul with less than 3/4 of fuel. I took pics for evidence . Uhaul truck needs maintenance brakes make noise really bad . I would like to talk to a manager about my experience.

Truck ran good but was dirty. Everything else was good.

The price on mileage . The rental total was expensive

Guys up front were on point, very helpful

The quality of help, care, and information from this location were exceptional. However, I can't believe how poor of a job Uhaul and the Uhaul website did at providing me with accurate info about this site in particular, I have a particular distaste for Uhaul itself and no longer trust the info on their website, in the future will be calling and asking a multitude of questions in advance. When I made the reservation the Uhaul website stated that there were after hours drop offs, when i got to the site I found out that the last drop was at 3:30 PM, and I picked the Uhaul up at 1:30, not enough time obviously - and apparently after hours drop offs were only for people renting an actual storage unit at Security Public Storage, which I was not so this was unhelpful to me. She gave me a number I could call if we wouldn't make it back in time for drop off, that Uhaul could point me to another drop off location. Upon calling the Uhaul number (which no one answered my first 4 calls), the man on the phone said because they had drop "after hour drop offs" (which for the record aren't open to the public), there was nothing he could do and I had to drop it at that location. He also said I could drop it off in the morning before work because they open at 7AM (according to Uhauls unupdated info) they open at 9AM. So this was also innaccurate and unhelpful. The only thing that totally saved our ass, was the kind woman at the front desk. I wish I got her name, but she said although drop offs are supposed to happen at 3:30 she would wait until 4:00 PM if we could make it by then. Well, by some miracle, we made it from Azusa to Sierra Madre, unloaded my furniture, and got back within 40 minutes. Honestly didn't think that was humanly possible, and got back right at 4:00PM. All this to say, this all could have been avoided if Uhaul had mroe updated info on their site, we would have made a different reservation obviously. I learned from this whole experience call and ask questions in advance because you can't trust that Uhaul's info is accurate. Thank you Security Public Storage fo rdoing everything in your power to help!

Stopped by their office the day before scheduled pick up and the woman confirmed they have my rental truck on site and ready. The reservation was for 9 am the time they open. I was leaving at 9:30 am to go pick up the truck when I received a phone from their office asking where I was; I replied I was on my way which is less than a mile and that I stopped by the day before to confirm reservation. He says "Ok, I won't cancel it". They act like they're doing me a favor. I communicated clearly as possible by stopping by in person, and giving credit card info to be charged, but they say they almost cancelled the reservation? People working in this office are of large girth and lots of ink. IQ level does not appear very high. Might wanna try another place. But, they do have cheap boxes and supplies there.