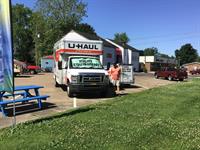 I had a reservation at your Riverside lactation in Evansville. When I arrived I was informed they did not have dollys. Without the dolly iI could not move considering stairs and such I had to deal with. The ladies at the counter did not care and were rude. Luckily I was able to secure a truck from this location as I had already taken off work and arranged help. Was a frustrating start. Reservations should mean something as people plan around them. Not that the riverside location cared.....

Wouldn't even know it's a UHaul place as there's nothing there. It's a vacuum shop.

Perhaps inspect your dealer locations. Doll's motel is awful. Overall dealing their your franchise locations has been dangerous and has insured I will never use uhaul again.

The people were nice and very helpful.

They where very helpfully and answer all my questions great doing business with them.

They can get a sign big enough to actually see from the road. The extra mileage I had to pay was because I kept going around in circles trying to find the damn building. I was driving a 26' truck with a tow package & I can assure you this was not easy on the neighborhood streets the office is on. This office was across town where I was sent because the office I chose was closed. Very small parking lot & I literally saw a U-Haul office with huge parking 1 block down from where I had to turn off a major highway that I should've been sent to instead of down city streets with construction, but I couldn't see it from the direction I came. Not this store but West Lafayette...I got a call after hours the evening before my move saying they had no truck for me. I had to drive 2hrs round trip to pick my truck up. I had reserved this 13 days in advance. WORST MOVING EXPERIENCE OF MY LIFE except for the guy in Peru.

The only problem that we had was how hard it was to opening the key box. They did come out to help us. The time to get the approval from Uhaul was a long process and it should have been done prior to picking up.

Maybe communicate a little better. They were expecting me at 4:30 when I had called to explain I could not be there until after 5. It all worked out because the gentleman who helped me had left but came back. Thankful!

To start, this is not the location that I was supposed to drop off. This location was as far from my house as possible! Second, this location was an empty parking lot with no signage or staff to assist. Completely unacceptable! The only reason I knew I was in the right place was because there was ONE uhaul trailer parked there.

Can't really give a rating due to covid. Only problem , had one brake light not working but had to use anyway because the size we needed was the only one available.

Keep the older gentleman around because he was super cute while trying to help me and my daughter out as much as possible! God bless you all. Thank you!

It took way too long (45 Minutes) to check out the U-Haul and they didn't have the tape and boxes I ordered. However, they were very friendly and did their best under the conditions (Main person was absent) and the COVID-19 Virus situation is slowing things down.

Forgot to tell them about windshield wipers

They are extremely friendly and accommodating at this location Steve and Tony are great guys.

Always the friendliest U-Haul guy ever. thanks for the help dropping off.

I give Mr. Martin & Associates 5 stars and two thumbs up. They went out of their way to help me and accommodate my very tight schedule. they had me in and out quickly. The equipment was exactly what I had rented and it worked great for me. Thank you very much, Mr. Martin and family.

This location was excellent. The only problem I had was that the confirmation email from U-Haul had the wrong location listed so I went to the wrong place first.

Make certain that all customer facing employees are well trained on the computer sign in process and forms. Also make certain that there are back up people available immediately when problems occur with equipment signout. We spent about an hour just trying to do the paperwork which threw off our schedule for the day. Also, the equipment was substandard. We used up a lot of fuel because the truck needs a transmission service. Even driving carefully the engine would wind out over 4000 rpm's before shifting except when we were already cruising along in a higher gear. Finally, I had picked out my preferred drop off location for the truck once I was finished with it but someone changed the drop off to a location approximately 25 miles away. The location I had chosen was literally less than a mile from my destination. I had to call Uhaul on Sunday to get it changed. I barely had enough included miles to get there so I didn't need or want to pay for extra miles. I was totally underwhelmed by the experience.