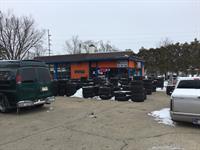 Didn't get dolly we paid for, location of uhauls was incorrect and not actually at the address listed. Location hours were wrong and employees were very rude.

Not tell them its gonna be 50 then charge them 90 and fuck them over.

This place is nasty I had to navigate through hundreds of car tires stacked outside the building just to get inside. No one wore a mask except me, and inside the building was also nasty things were everywhere including the small counter top. The lady checking me out took forever it was like she was learning how to use a computer for the first time. The only redeeming part was the man that should me the proper way to use the trailer.

Customer service picking up the uhaul was awful. Did not feel welcomed at all. The worker acted like I was not even there. Seemed a bit expensive too. But I understand.

Charges are more. Insurance plus mileage plus gas

Very unorganized and terribly slow, the person "helping" me stood outside talking to someone leaving me in the so called office for 20 minutes. There were 6 people just hanging out in the tiny office, no social distancing what so ever. Rather rude attitudes.

This was not the location I was supposed to pick up my uhaul. I showed up at Motorsports in Elkhart IN by 4the pm wich the location was open until 4:30. NOBODY was at this location and the phone number kept transferring to another number. At 4:15 I finally got a hold of someone at Uhaul by 4:30 was told I had to go to an other location. So now I was a half hour behind my move and the location was farther away. I believe when I reserved my uhaul 2 days ahead it said $50 if my reservation was not there well it wasnt there an nobody has contacted me. This is the second experience i have had with uhaul that this has happened and nothing was ever done either time to compensate me.

While I was checking the truck in via the app, there was a very suspicious man questioning my wife while she was waiting in her car. This location is not a very safe side of town.

The original u-haul dealer in Goshen didn't have a trailer and said they would do their best to have one at their location. Didn't happen, so that was a little disappointing.

Get a better computer program. Poor lady had to spend over an hour just filling out the info. Had to do it over and over and over because u-haul system kept losing my information. Finally it went through. If you cant fix then go back to a paper system and fill it out by hand. Some IT guy is getting paid to much for a screwed up system.

The location. Wasn't open on time and was very poorly cleaned

The woman who rented me the truck was fine, but the place itself was a mess.

The mobile check in was difficult because it did not provide me without enough info prior to getting to the location. The individual working had to end up taking care of everything which was much easier.

The staff was friendly and helpful. The location was at an old repair shop and wasn't your typical uhaul store. I would probably go to another location next time. However, the staff was nice.

You can't do a thing, It's already perfect.

Location isn't one that I would have elected

Nothing. Good location and good truck

There was no where to park on there lot. The place can be cleaner.

When I arrived to the location to pick up no ones was at the location. I waited for 20 plus minutes till someone showed up. Trailer was block by other vehicles and had to wait till a car that was blocking access was charge and moved out of the way. Not sure why set up appointments if they are optional for the site.

The Location is in the middle of old town, no real good access, the picture is misleading, the place is a used tire sales point.

It was snow ridden and cold. the location is NOT ideal, the picture is misleading

I had a confirmed reservation for a 10' truck and none was available. Since I don't drive trucks very often I wanted and needed the smaller one. I only learned on the afternoon before the rental that a 10 foot was not available. They gave me the $10 lower price, but that was not my issue.

The lady wasn't even there for me to pick up my truck. Then she had me wait 20 mins n then another 10 even though I filled all the information out on line. Then when I dropped off the truck the lady's husband was bring rude n not very business like . I ask the lady how much n why n her husband just jump in the conversation and wouldn't stop talking.

They were closed when I was scheduled to drop off. I had to call them my location from uhaul online was different from my location on my contract. Spent almost an hour making calls trying to not get charged for wrong location. When I did online drop off when I clicked use my location it never said anything about wrong location and this was before I called and went thruough customer service and then transferred to scheduling to change my location. This whole experience was like dropping the ball for me. I mean they were closed when I was supposed to drop my trailer off and a pain not knowing what to do before. I've used uhaul multiple times. This experience honestly drops it from a 5 for many reason. To about a 4 with my experience 10-12-18. Also I think my contracts date for drop off date was incorrect. As it said I â€œ I believeâ€ have the contact handy; but it was for Friday the 13th. If I am called for further details I'll have the contract handy.