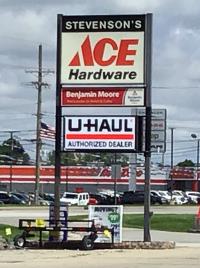 Your website sucks. It would not let me register on line. It kept saying my DL expiration was false. Did the same with my husband's. Also told us no trucks were available at the preferred site so we booked at another and the day before pickup Uhaul called to say truck was not at pickup site but would transfer over to other site which was the one we originally wanted but had none. When I called to confirm the reservation had been changed from a 10 foot truck to a 15! The kind young man at Stevenson's put us in an appropriate sized truck and got us on our way. Stevenson's was great! Uhaul is a mess!

Rented and picked-up a car dolly which I couldn't use. took it back and was still charged and told I dropped it off at the wrong place.. still need to get credit on that unit

While this location was great, I do not appreciate the fact that despite having reserved a truck for 6 days ahead of time from Lafayette, no trucks were made available to me from Lafayette even for a 24 hour period. I had to drive all the way to this location, and pay for the miles both ways which seemed very unfair to me. Quite frankly, U-Haul should not be accepting reservations if they don't have anything available.

Don't say the tank is full of gas when customer has to prove it was not. Please fix air conditioning in your trucks.

AC did not work! Long drive on a very hot day to have no AC! Not happy about that. Toward the end of the trip the engine light came on as if the lack of AC wasn't stressful enough. NOT happy!

The gentleman that helped me when initially renting the unit was very nice and professional. A+++ all the way around!

Everyone was great during the drop off.

It was clean, when I picked it up. Began to have a strong gas smell inside the cab. Called them. They suggested I make sure to tell them at the drop off point I tried to tell the worker at the drop off . He didn't have time for me nor did he want to listen. Just told me to put the key in the drop box

Get rid of the manager who threatens to cancel my reservation because HE was confused thinking I was pulling a truck with a car therefore I am renting a second trailer from another company but the trailer that I did rent from uhaul was fine for the first car I towed out of 2 that needed to be towed.

The Crew at Ace Hardware in Crawfordsville were extremely curtious and helpful.

The people at ACE hardware are very friendly and offer great service. Thanks for partnering with them ! Rick Tanner

I was a few minutes late dropping it off due to family life and they charged me 2 days. That's ridiculous.

The truck was very dirty and needed serviced one of the worst we have ever rented.

The truck was clean but it was very beat up on the body of the truck and it ran very rough. It's a very good thing I wasn't traveling across country with it , because I don't believe I would have made it out of the state.

easy to return and very friendly

Just make sure that there's plenty of gas in the unit to get started out with.

Update it so that you can find the location when people attempt after hours drop off! I had my settings on to share my location and was told Uhaul could not find my location. It's crap that I have to pay an extra $20 because you can't locate me (I had full signal, 4G, and a full battery on my phone)! Make sure you can return the truck during business hours or Uhaul is charging $20! This is not a poor reflection on Ace, their service was great!

Nothing the customer service was outstanding and they were caring and kind. They answered all our questions and even told us somethings we didn't think about

Over priced for the short time had the truck.