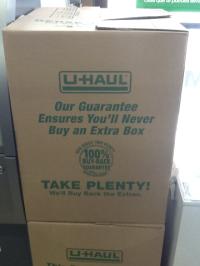 Shantae provided great service when I called with questions!

Not good lighting in area to take return pictures at night.

Ordered movers blankets but did not receive.

The agent was really nice. The inside of the truck could have been cleaner.

Do not pick up from this location. Weird, run down spot. People in the parking lot yelling and harassing us. No one in the store wore a mask, including the guys behind the counter. They charged me for 2 dollies I didn't rent. I called and they said go into the store to get refunded, the store said call them to get refunded. We just left since I didn't want to get Covid or murdered. I'd never pick up here again.

Notify customer that information will come by text. I didn't now until after I had returned rental.

OMG, this was the worst experience renting a U-Haul ever. Had to load my own dolly and mats. I am a disabled veteran and lifting even these mats was a struggle, but the guy refused to help, took me 12 trips from his liquor store (where this U-Haul is located) to the truck just to get all the mats in it. I was only meant to rent and drive, and normally all the equipment you rent is already in the vehicle. This dude is rude, and even told me he doesn't even want the U-Haul company in his business. Stay away!

UHAUL on Line Check out is a MAJOR FAIL!!! COULD NOT pick up my vehicle that way. AFTER an hour trying, the man from the store came out and then checked me out inside the store. I WILL NEVER USE YOUR MOBILE CHECK OUT AGAIN. IF IWAS AT A LOCATION WITHOUT A NICE MAN INSIDE, you would have stranded me with NO HELP. NO ONE ANSWERED the PHONE CALL HELP EITHER. YES I"M USING CAPS BECAUSE it is major UNSAT!!!

Uhaul was clean, in good shape and was easy to pick up and drop off using the app. The cargo area had furniture blankets in the back that we didn't order but other than that the experience was ideal.

The pick up online process was obnoxious. They needed way more info than necessary and it took too long. It wasn't the location's fault, it was Uhaul headquartersâ€˜.

The process was a bit confusing but overall easy, location was sketchy, not in the best area. Also the furniture mats I had requested were not in the vehicle. Called to have them removed from my bill and they were not.

Using the website to rent and gain approval for the uhaul took way too long. The approval took 30 minutes and I had movers to help me who had to wait for me to get the van. We were not able to get a hold of anyone while we were waiting and I had to pay the movers to do nothing while they waited.

Pick up was smooth and simple, very efficient

uhaul app needs to be updated so quicker

Renting from a sketchy convenience store. One worker was an older man who was kind, later that night was a different man who was rude. The truck smelled like a literal barnyard, clearly not disinfected so no covid guidelines being followed. I felt like i needed a chemical bath after sitting in that truck. The driver door also did not shut unless it was aggressively slammed. I was called and asked to change my rental location and time which I was fine with but had I known the location I would not have agreed. You have to wait in the convenience store line to do anything with your rental where they are not enforcing masks. Very dissapointing and will be hesitant to use uhaul ever again. I would give 0 or negative stars if I could!!!

YOUR mobile app SUCKS. I was not able to start or complete the rental with it. It told me several times I had to wait until 9:30 when the location opened. I was at the location at 10:30. The store owner handled everything. HE WAS EXCELLENT!

I was waiting a long time to be helped, the instructions weren't very clear on what vehicle was available or what needed to be done prior checking the vehicle and returning it, and they gave me the wrong truck, they were able to switch but it was a very long check out/drop off process

The vehicle was clean and easy to pick up. I did an online check-in and picked up the vehicle at 8 am electronically. However, the furniture blankets I had ordered were not in the truck, even though my reservation was confirmed. I realized this when I got home, and I had to wait until 9am when the location opened to call and let them know I did not receive the blankets. They then told me I could come back to pick them up. However, upon arriving they informed me that they did not have the blankets! I was then sent to a different location to get the blankets. I found the experience disappointing and negative since my time and the time of the movers I had hired was wasted while trying to track down blankets that should have been in the truck when I picked it up in the first place.

The cab drivers side has dried mud. It was there before I rented the truck. The online process was clunky at best. I had to call in for support bc I couldn't get it to continue through. Verification of my ID took a long time. I feel like that could have been submitted during the online order so it was done when i went to rent. It took a long time. I also wish the app explained that you have to take pictures at return as I was in a hurry and getting the truck cargo area open and closed correctly is physical and difficult on some trucks (This one was hard to get it to lock and unlock). I don't know if i would have found the keys without being on the phone with an agent. The key box was no where near the key return and it was plain black and had no uhaul markings.

Difficult to check in online considering selected counter check-in at purchase then representative was not available in-store and check-in online was not listed.

make the online pick-up instructions a bit more clearer. I figured out how to get through the steps but it was a challenge at first.

Was told I would receive a call the night before with the location, didnt receive anything. Maybe clarify how I will find out my location

The worker at the location was extremely rude, the truck was filthy with all moving blankets tossed around i the back (we didn't request blankets), and the dollies we rented were not in the truck. When we went back for the equipment, the worker was rude as if it was our fault he forgot to load the dollies. Also, the truck had no rearview camera/mirror, and the side mirrors would not budge.

It was a liquor store, the guy was working alone and couldn't get anyone to show me how the tow dolly worked, had to watch it on You Tube. He waiting on several store customers before me even though I was waiting. Lastly, the tank was only half full. I assumed it was to be full and refilled when you dropped off. I filled it before dropping it off.