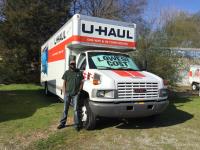 Everything was great I was totally satisfied thanks

It was not clean. Furniture pad holder empty. Not informed of add on cost. Was quoted $29.99 and with "taxes" it ended almost double. Will never rent from your company again. It's a bait and switch. All costs should be quoted up front.

The staff were disinterested but not rude. The truck was not clean. Empty but not clean

The business was not open when we dropped off the truck and dolly. We made the effort to arrive before the posted closing time, in case there were any issues, yet no one was there. I have no complaints though as there was plenty of room to park.

Never using this service again, your customer service just runs you around and then "accidently" disconnects you (ThREE TIMES!?!I DON'T THINK SO!!!) and then you start all over it takes HOURS TO GET SOMEONE REAL ON THE PHONE!!! AND they never solve your problems just tell you that they're your problems and there is nothing they can do. Its awful, your website NEVER WORKS and you over charged me, I only had our one extra day and I declined the daily damage insurance when reserved the truck and you charded me three times for it anyway!! What a freaking SCAM!!! THE WAY YOU MARKET THE SIZE OF YOUR TRUCKS IS MISLEADING!! Your trucks are tiny. WORST SERVICE THRICE OVER, this was your last shot. I'm sticking with penske from now on, NEVER SEEING ME AGAIN UHAUL!!

They were very helpful.

Good people to rent from

check in went fine or as well as expected. I called this place after I got the truck at my house to load when I saw the engine light on and a big puddle of oil on the driveway. He said that it needed a oil change and that's why the light was on. He said if there was any issues while on the road contact U-Haul, wow, that's concern, really? I checked the oil and it was on the stick so I headed out late in the evening. I had to clean the inside windshield because it had been wiped down with a greasy towel, wow what glare from the oncoming headlight and not to mention the head lights needed adjusting because they were pointing down at the road so I drove with them on high beam all the way to my destination at an average of 45 to 50 mph. It took an extra hour to get to my location. I'm really disappointed with the whole U-Haul experience. I'll for sure go a different way the next time I need to move.

Come down on the prices. Heck next time I got to move a vehicle just across town. I guarantee I I will get a Tow truck I mean it's the same price plus you don't have to do nothing but show the driver where to take the vehicle

good service get equipment just be there when I need you

Everything was perfect for me. The person who helped me was friendly and helpful. I would definitely come back.

I have rented here several times over the past year. I have also recommended my family use this location when a U-Haul is needed and they have done so with pleasing results. Always easy to do business with. Trucks are always clean and in good condition.

I was supposed to pick up a uhaul at 9am on 7/2/16. I got there at 10 till and no one was there. I waited till 10 after and then started making calls. Come to find out, they don't open till 10 on Saturdays. But I had a confirmation for 9am? Customer service told me it would take longer to get another one than it would to wait on them at 10. So I waited. I was back there at 5 till 10. At 10 after I went back home and called back. Customer service called and at 15 after he was finally there. When I got back the owner was rude and didn't understand why I was upset. I had 4 people waiting on me to pack a truck that I didn't get for an hour and a half later. That cost me $250 extra because they were paid by the hour. This was a very bad experience and if I ever need another truck, I will find another way.

This Uhaul place was closed when I dropped off the truck, but the location was very small an off the road kind of place. It was not very inviting. I was told by the owner (having met him at a near by gas station) to drop off the key at the location and he would turn in the truck. When I dropped off the key, I felt weary about leaving the truck, but I did so anyway. I called the renting location and I was told they could not assist since all they do was rent the truck. I told them the documentation stated I was use drop it off at another location even though I told the renting employee to leave the drop off open. I got a call from the initial drop off location at Lindale wondering where the truck was. I explained and he told me he would see if he could make notes on my file so I won't be charged a fee for dropping off at another location. The Rustic Trends guy finally checked my truck in on Sunday night. I guess all is well now. But I was very concerned as of the process of this whole ordeal. I probably will not use Uhaul again.

Lost 100.00 security deposit which was agreed to be returned when truck was returned. Drugs being sold out in the open while we plus other customers were present going to call head uhaul company for relief.

Made a reservation got to the location to find out they didn't have a uhaul and was very rude then went to a second location and had to wait an hour to get the uhaul. Very poor customer service.