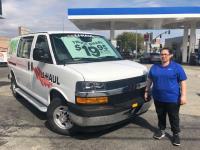 The service worker was short tempered, I had issues with the 24/7 pickup service, and I was double charged. I am very upset.

I forget the representatives name, but was efficient and had me in and out for both the pick up and return. Thank you good sir.

When I picked up the cargo van I rented there was a tire pressure sensor light. I didn't notice this till I drove away and when I returned to the place to question this, the clerk said there's nothing he can can do. I ended up bringing back the van to this horrible location and re-renting a van from the much better Corp center in Chatsworth. William at that location helped me so much and is a great person and they are lucky to have him

Rude, dishonest and arrogant. When I called the reservation line they said I can have the truck for the day. When I arrived he said I can only have it for 5 hours, he Could have finished the process then move to the next customer but he keep took the next Person and took almost 30 minutes to finish the process, none stop telling me â€œ listen, I do it when I do itâ€ . Didn't explain notting and was fixated on pushing me insurance when I already told him I have an umbrella insurance that covers and even had the policy with me. He told me 0.99c per mile but my card was charged $1.19 per mile. Lucked I only needed two hours and brought the truck back Even way sooner than 5 hr but on my paperwork he counted the 5 hours from the moment I walked in not the moment I got the keys. When I asked is there anything I need to know about the drive, he said â€œits a car, you can figure it out â€œ.Not happy as he gave me more stress while I was in the middle of an emergency and had to move my stuff fast.

The cargo van I rented was extremely dirty both outside and in (cab and cargo). I was told that the local dealer location had no capability to sanitize the equipment. Being on a deadline and of a vulnerable age to Covid, we cleaned and sanitized both the cab and cargo area before using the equipment. It took over an hour to clean the filthy interior. The exterior running boards were saturated with red clay. Overall it was a very distressing experience.

I ordered the smaller dolly and the truck didn't have it. An area of improvement would be providing the tool a customer orders/pays for. Would've been very helpful to have during the move. Other than that, everything went great.

Revise your process. I didn't particularly enjoy having to wait to be approved when I was already at the location. I thought because I checked in the night before this would be handled. I had Day workers with me and I had to wait for approval. If for some reason I was not approved at that time what would I do with my workers?. I suggest getting the approval process done during the pre-check in process, which I thought was the whole point for the pre-check-in?

I signed up for mobile pickup thinking it would be easier. I was wrong! On the day of the rental I signed into my account. After providing my license (front and back) and GPS location I was told on the application to go into the Mobil gas station and obtain my key. The attendant there told me to call Uhaul and obtain a code to open. I called and after nearly an hour I finally received the code to open the lock on the back of the truck. Why would you ever inconvenience your customers this way???? Once I'm signed in, give me the code on my phone so I can be on my way. I lost nearly an hour that day because your system sucks. I wouldn't even use your trucks if you didn't have a monopoly. If I absolutely have to use Uhaul again I'll be going to an in person location. Secondly, I requested an appliance dolly. No appliance dolly was present in the truck. Instead you provided me with a utility dolly. I'm moving a fridge. That POS won't work cut it. Instead it'll break it and then you'll charge me. Why can't you update your system to alert your customer that no dolly is present in that particular truck so I could look in another location? You inconvenience your customers, have them do all the work and then charge ridiculous fees. Your company sucks!!

Excellent fast and easy check in and out! The ladies inside the gas station were extremely nice and attentive in helping me out.

When I went to pick up the truck I'd reserved at the 6423 Topanga Canyon Bl location, I was denied service simply because I didn't have a smart phone that could connect to the internet. I had an entire day of moving plans arranged with various parties, and suddenly I was being told U-Haul wouldn't rent me the truck, ruining all of my plans, because I couldn't take a picture of my license with my phone! I received no advanced warning that this would be a requirement.

Help make the approval process quicker. I wasn't prepared to take photos of my license and face, then the approval waiting time was about 15 minutes. I was standing in the hot sun with a lot of things in my hands and I had to put everything on the ground to keep taking photos. The manager at the location was great.

The staff was pretty rude and short

The people I contacted first of the box location on Ventura we're very nice very helpful. So your web on the computer gave me a little bit of trouble and I finally had to set up at another location. It would be nice if it says what time things closed and when I was trying to put in a drivers license it just ended up taking a picture of my face instead of thelicense. But everybody was very helpful and I ended up on Topanga Avenue got the truck no problem they helped us and it's already returned a few hours later.

When I got in the van and checked the gas gauge it was less than what they wrote on my paperwork so the clerk revised my paper. However, after I returned it, I noticed that they charged me $4.75 for a gallon of gas even though there was more gas in it then when I picked it up. Called the station and they said they were going to refund it but I have not received anything yet.

They only had that one truck , I wanted to get a bigger one that morning but they had none . Just received my invoice they charged me for gas when they should have not . I filled the tank at the same gas station where the truck was picked up to the same level they gave it to me . I am asking for the invoice to be corrected . Would appreciate your follow up . Thanks

Better Customer Service. No Dolley in the truck and the attendant had an â€œOh wellâ€ opinion and said â€œthere a small Uhaul location see he couldn't help me. Although I listed to have a hand truck on the truck when I made my reservation. I ended up at Home Depot to rent from them. Worst experience ever after using uhaul for over 20 years

The staff working that day were very nice, personable got me in and out quickly.

The truck stunk and when I tried to get a new truck, the representative made it clear that I would be charged for the stinky truck along with the new one as my money would not be refunded for the first truck.

We realized after driving a few miles that there was no gas in the truck. We than had to search for the nearest gas station. The truck was dirty as well...trash had been left in truck. The rental was set up for 8 hours yet we were told we had to have the truck back by 3pm! Very stressful....the young lady that checked us in was very nice but the young man that we turned the key into was indifferent and not the least bit interested in dealing with us.

The people working were very nice however the van I rented was suppose to have furniture pads and didn't. So I was told they were removing them from my order. Then when I got my receipt Via email I saw that now only was I charged for renting furniture pads but for a damage feee because since I never had them I had no way to return them.