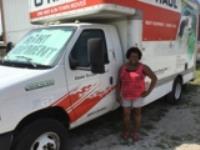 Where do I begin? When I arrived at the facility I found a sign saying "you need to make an appointment", so I knocked on the door with no answer. I knocked again and called the number in my email for the location but received no answer. I called again and finally got someone on the phone. I said I was there to drop off a trailer and she said I needed an appointment, which was not mentioned anywhere during the scheduling of the trailer, nor was it mentioned in any of the email correspondence I received regarding the booking. This location is one way in and one way out, so there was no way I was going to be able to get out with the trailer attached at this point. She told me to just "drop off the trailer to the side". Again, no one is there, and no one has explained to me how to unhook a trailer. She starts speaking down to me and just says leave it and she will handle the trailer when she gets back but she doesn't know when that will be. Mind you, this is 4pm in the afternoon. I go over to my trailer and try to unhook it, but this is not a standard trailer, it is a proprietary design by uhaul, which again, no one had explained to me how to unhook. Then another vehicle pulls in to the facility and a middle-aged man gets out of the vehicle and stares me down. I am a 120 pound young female who is alone, trying to unhook a trailer, with no way out of this facility at this point. My heart rate starts to go up and to be honest, I start to get very concerned for my safety. After 20 minutes of struggling I am finally able to get the trailer unhooked, all while watching this individual out of the corner of my eye and fearing for my safety. I called the number for the office again after I left only to be yelled at by the lady who is running this facility saying she would never have unhooked my trailer to begin with, and she is entitled to her own lunch break. I was visibly shaken after this experience and never plan to rent from Uhaul again because of how terrible the return experience was. I could go into so much more detail about how it was. And coming from the GREAT experience I had in picking up the trailer (at a different location), this was so disheartening.

Owner/manager went above and beyond to help me get my rental even though it was after hours! I'm very grateful and impressed. Thank you so much!

The picture online shows a Hair Salon area and looks like it's in a strip mall, however when you arrive at the location, it's a rundown building and no hair salon in sight. It had a "sketchy" feel and was less than inviting. The mobile drop of was super easy, no problems there, but I wasn't sure I was at the correct place at first. Thankfully, another customer pulled up to drop off their U-Haul and said he too picked the Hair Salon location and thought he was at the wrong place. In the end, the vehicle was dropped off and the process itself was simple, but the picture of the location on line was nothing like the location in reality and it leaves customers confused.

The location was in a seemingly run down industrial area. The directions took us to a grass lot and the actual location was on the other side of the field w no apparent way to get there. They were extremely nice but very odd location.

Never change ownership. Miss Ruth is the nicest most professional person, ever!

Clean the mud off the floor, both sides, and empty the ashtray.

No one was there but my wife did contact owner that we were dropping trailer.

I'm going to call and ask for my money back on Monday. The dolly I reserved was not available, even though I confirmed my reservation 2 days ahead of time with the location via phone. My bill is showing the U-Haul had almost half a tank when it had a quarter tank. The back of the U-Haul had about a dozen loose screws in it. U-Haul had a check engine light on and the alignment was very far off. I will mostly likely never use U-Haul again unless I am somehow made whole. 270-784-9424 to contact me

The lady that was there was very nice and helpful. However, she was an older lady that was filling in for her daughter in law and did not know how to hook up the trailer. Additionally, she was not able to physically help us lift the trailer onto the hitch and there was no one around to help us do that and no kick stand/jack to help us with that, and so it was quite an ordeal to get the trailer ready to go. They did send guys out to help us but by the time they got there we had already figured it out on our own.

It's was in a run down area, vacant buildings and a nightclub. It would be scary at night, however the lady was very nice and the truck was clean, but I don't care for that location.

My card was charged more then the bill

Shut this location down. Located in a very sketchy hood; equipment wasn't ready; and the person in charge couldn't figure out the contract to get me going on time.

I felt i was overcharged... The way yall read miles is weird... Used the uhaul in town for 157$ thats outrages! So no i would not recommend it to ANYONE!

Don't tell the customer his business... Or what they should have or could have done differently... We're all adults, and believe me I know what I'm doing and what I'm about.

Amazing experience. The lady who took care of me on pearl street went above and beyond. She kept me informed during the entire process. She was very nice and professional. U-Haul should terminate the managers position at the Campbell lane location and give it to the lady at this location.

We were scheduled to pick up the truck at 9am and no employee arrived until after 9:10am. I had to call the number and ask for someone to come. When the woman arrived she told us she wasn't going to come over to the location until we called her. So unprofessional and wasteful of our time. The office was disgusting and was amongst a bunch of abandoned buildings. The office itself was dirty and messy. The uhaul location had none of the â€œextrasâ€ I had pre-selected online so we had to go to a second uhaul location to pick those items up (moving blankets, mattress bags). In the end it took over an hour to just get the truck and extras. When we returned to the location 2 hours later (as we told the woman we would) to get the car dolly attached to the uhaul, no employees were there. The office was completely closed. Again I had to call the woman and wait 10 minutes for someone to come. This location should be shut down. It's terrible representation of uhaul.

Your main computer. We had to repeat info to the phone operator 3 times, both in arranging the rental and in picking it up. She blamed it on her computer. Also the phone operator led us to believe we had 1 month free storage. We did not. And this cost us $40. The gentleman on location was great.

Aside from the Pearl Street location, my experience with Uhaul was a complete nightmare. I was sent to three different locations to find my rental, and no one at either of the first location (Cambell Lane) seemed to be very helpful or know what was going on. The situation caused an completely unnecessary world of stress for my moving day. I WILL NEVER USE UHAUL AGAIN.

No one onsite upon arrival. Had to wait 30minutes

The price I had to pay did NOT match what your online site SAID I was going to pay. Went from 56 to 86. What's the deal?

You guys gave me a truck with no fuel then tried to charge me for filling it up. Worst experience ever. Wasted 6 hours reserving and picking up truck. I have never had a worse customer service experience.

The lady was VERY nice and friendly. The inside was VERY cluttered.