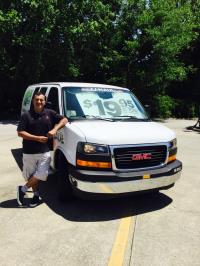 The man that helped us was excellent. He was knowledgeable about U-Haul and knew exactly what we needed. So very helpful during a stressful time.

My biggest problems were that the window had a big crack that was working its way into the drivers vision. Also the clerk made me click on that I had received the key before he would give me the key. That seemed wrong but it worked out

Nothing. Great equipment and easy pickup

Great experience!!! I had chosen a different location based on reviews, but U-haul system sent me back to this one via text (truck availability) the day prior to pickup. I had done the online check in and paid in advance & the pickup process could not have gone any smoother. I was in and out in a flash, well done!!

Very dissatisfied. Couldn't find my reservation. Had to settle for a smaller truck and when pickup time was 7pm, I was told I had to return it by 1:30 am. We worked all night and had to use extra miles due to a smaller truck. Then I was told I would be given an additional 60 miles free since my original pickup location changed which I did not get. Terrible move in experience.

Poor customer service. Took multiple calls to get equipment checked in and billing correct. Employees were too busy with other tasks to administer U-Haul functions

Nothing, simpler and easier process than going thru an actual uhaul store. No wait and was in and out within 15mins.

Air freshener for the cab

This location didn't have anyone to give the key to.

I could not find the location as their were no signs saving Uhaul drop off and the GPS passed the location so it was hard to find, however, I'm glad that it was very easy to drop the truck off with my mobile device.

I had to wait for at least thirty minutes to pick up a truck I had arranged and paid for the previous day.

I think the mobile instructions could be better. There was confusing process with the man helping me in the store.

reserved equipment not there as promised

Need a u-haul personnel to be present. No paper work was given. Took way too much time to conclude the deal and hand over the keys. The shopkeeper was kind though but he was not a u-haul proffessional.

upon arrival the store associate was less than helpful. he asked what trailer we were getting and then proceeded to tell us to hook it up and then pull to the door so that he could take a picture (which he didn't do). He offered additional coverage to us but couldn't provide the amount for insurance nor what it covered. Overall this was a horrible uhaul experience.

I had to hookup the trailer myself and check turning and breaklights. It's heard to check by yourself. Also had to unhook myself. I just got my receipt 24 hours later.

Needs more help at the gas station/food snack location. I had to wait 45 minutes for someone to come in because the clerk would have had to temporarily close and lock up to come outside and help attach the trailer.

This truck was in an unacceptable condition. The shocks were terrible; the brakes were terrible; the steering wheel was crumbling in our hands; we were unable to adjust the side mirrors as the knobs were broken off so we had no way to adjust them and/or see adequately before switching lanes; we had to drive through a very bad storm and the wipers were in very poor condition; and the cigarette lighters were both broken which wouldn't have been a big deal except for the fact that we would have liked to been able to use our phone for music and to charge while driving over 700 miles. This truck was essentially a death trap. I no longer will recommend U-Haul.

Was told ahead my truck with 3 dozen blankets and a dolly would be all ready for pick up. This sight had no equipment. The guy then sends me to another U-Haul site to get the blankets and upon arrival they had no blankets. This site sent me to another site and I finally got the equipment. Unfortunately the first guy had no interest in helping me and assured me the second U-Haul site would have my equipment without checking. I wasted miles driving the truck all over town as well as packing time. What a waste.

Most horrible experience equipment was not ready at reservation had to go back following day, then was not suppose to be charged for dolly due to store error, not only was I charged but charges for $10 instead of $7

This place is a gas station. Had to go back twice because vehicle was not checked in when we were told it was. UHaul customer service was no help at all. Waste of my time and frustrating. Will not use uhaul again.

After having checking the vehicle out online to supposedly reduce time in the store, I arrived and was told by the agent, "Wait 10 minutes. I can't give you the keys. I have to text the person can." "Is that person not here?" "He is at home. Uh, he is out of town. Just 4 minutes." Several minutes later.... "Okay, you can have the keys." The back of the truck unswept and had several cardboard boxes full of trash. The cabin also had trash in it. I had to clean the vehicle out myself, making me even more late. What gets me is that in the end, instead of receiving a discount for doing UHAUL's job for them (cleaning out the truck), UHAUL profits off of me reporting the problem by collecting a fine from the previous renter. They make money by being lazy.