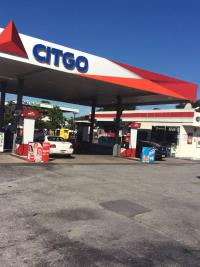 The service was very rude to me and my family. Especially when I was returning the truck. They were trying to make me leave and drop the truck off at a different location. Although that was the location I picked the truck from the start.

I checked in on line but the rental site wanted me to pull it up and finally he said I will do it and he did The dollies I rented were not all available which made the move a bit harder. The truck was very difficult to start because the key would not turn. You had to jiggle both the key and the gear shift until it finally released. Something is worn out either in the gear shift or the ignition. Lastly when I brought the truck back the tech made me take a picture of the mileage and the gas level. Generally they go out and look. Then he told me to bring the dollies to the front and tried to tell me from behind the glassed in both where to set them. I put them on the wrong side of the locking propane box and he came out and said "you did not put them where I told you to". I felt like I was a bad employee because I was not following his orders. I guess he was the customer.

When got in uhaul there were face masks left in there from before.

This Location was different than any other location that I have used. Lastly my money was paid and weeks 26.00 more dollars were taken from my account. I Feel that was unfair.. Not Happy With Service.. I do not even know how much gas was registered in the vehicle when I drove off

The agent was HIGHLY UNPROFESSIONAL AND LACKED CUSTOMER SERVICE SKILLS. I WAS GIVEN A TRUCK WHICH HAD A BROKEN SIDE MIRROR THAT DIDN'T STAY IN PLACE. THIS WAS AN EXTREME NEGLIGENCE ON THE PART OF UHAUL. MY SAFETY AND LIFE WAS PUT AT RISK AS WELL AS OTHERS ON THE ROAD. UPON RETURNING THE VEHICLE AND NOTIFYING THE AGENT OF THE SIDE MIRRORS, I EXPRESSED MY CONCERNS OF SAFETY ISSUES WITH PARALLEL PARKING THE VEHICLE AND ASKED THE ATTENDENT TO DO SO, HE DISREGARDED MY SAFETY CONCERNS AND FORCED ME TO PARK WHEN HE FELT THE VEHICLE BELONGED WHEN OTHER SAFER LOCATIONS WITH REQUIRING REVERSE DRIVE WAS READILY AVAILABLE. I AM FILING A COMPLAINT WITH ATTORNEY GENERAL UNLESS U-HAUL ADDRESESS THESE CONCERNS IMMEDIATELY.

Was no windshield wiper fluid in the canister.

The whole process from this particular uhaul location was GHETTO as hell. You have to come to a window at a gas station. An OUTDOOR WINDOW. The communication is wack. Like I'm completely disgusted with my experience here. It was a complete mess

Easy in and out. Everything ran well from the location.

It's labeled as a "Citco" but it's actually "Shell" gas station. There was a homeless man there pretending to be an employee of Uhaul. He told me where to park the truck, and asked me was it clean. After I went inside the gas station to return the truck keys, since there was no key Dropbox, when I walked outside the man asked me for money and said that he "volunteered for Uhaul". This location isn't very professional.

Evette in 800 customer support helped me with last minute change in reso - she made me feel valued and 'found' a way to make things smooth for us. THANKS

I had a vehicle and it had battery problems . They did not answer the phone so i had to go thr location which was very inconvenient Also they overcharged me for gas

The van was clean for the most part, but someone left behind fruit on the seat.

the cab was absolutely filthy. It reeked of smoke and was covered in dust/dirt. I had to clean, then disinfect the entire inside before we could use it. Someone left a half eaten piece of hard candy in a side pocket of the passenger door. I refused to touch it because I didn't have gloves. We had to drive, in the rain, with the windows cracked because the smell of smoke was SO STRONG. I want a discount and a refund for this issue, and, because there was NO DOLLY AND NO MOVING PADS WHICH WE PAID FOR. We returned this vehicle in 100% better condition than we received it.

The checkin process took too long

Wow could there be any better example of opposing experiences, this location was not welcoming and didn't acknowledge me as a valuable customer. The employees barked orders where to park from behind the glass. I asked for assistance and no options were provided. I left with a very bad impression

Having a uhaul at a busy gas station was good because it was close but it's not trusting when you don't get charges explained that are ridiculously high. Next time I'd definitely go to an actual uhaul building where they do everything professionally.

My reservation called for an 8:30 A.M. pickup for a 15ft truck. I arrived at 8:20 to an unattended locked facility. After calling UHaul directly I was given another phone number for a regional UHaul manager to help me. Myself and UHaul called the site number, no answer. The attendant appeared after a 3rd call by the regional manager. I was then told they did not have a reserved 15ft truck onsite, but only a 10 ft truck. Although the regional manager showed two 15ft trucks in inventory. The attendant explained the 15 ft trucks were out for maintenance. Also, I reserved 2 handtrucks and moving blankets. I received 1 handtruck only. When I asked what was the point of making a reservation, I was met with a take or leave shrung from behind a glass partition. I hired hourly labor for the move. So the total time of the move was extended because of the late start. I also had to use two personal vechicles to transport the remaining items not able to fit into the smaller truck. Moving is stressful enough without dealing with these sorts of problems to start. I have used UHaul in the past, without issues. Hopefully this was just a bad dealer.

I arrived with no one else in the store having completed express check out online. The clerk was rude and EXTREMELY unprofessional. I arrived almost 15 minutes late I had my documents ready said please thank you and still was treated terribly. I gave the clerk I believe Mohammed my DL he took it didn't tell me what he was doing and proceeded to ask for my credit card. He sat it on packs of gum while still working with my DL on the part of the counter where clear plexiglass allowed my card to be visible. Three male customers came in. Instead of asking for my patience as I was there first he essentially told me to step aside. I explained I had a timed rental and had been there first if he could please finish bc I had people waiting on me to help me move. He said no, I could go somewhere else he wasn't going to help and threw my DL and credit card back at me under the plexiglass. I was perplexed because I was not rude or nasty with the man. Everyone in the store allowed him to handle me this way. I did wait bc there was a need. When he took my id documents back he said he didn't have a dolly which I had reserved as part of my order and he wasn't going to charge me. What he did instead was at a $25 insurance fee to my bill that was NOT on my reservation. I was very disappointed by the signage of the building, I assumed I would be working with a kiosk which in fact would have been more favorable than BFF man behind the counter. I did everything possible to use and return the van as soon as possible which my reservation was for 6 hours and it was returned in approximately 4. The return process was much easier as I gave him the key and could simply walk away. I would NEVER recommend anyone to use this uhaul location. They do not honor customer service, guarantee your reservation, and up charge you for things you do not request. Horrible!! The man had no empathy and did not care about my time he was interested in making money for his store and serving me before women. I observed how he handled men while I was there and my experience was very different. I literally was spending the most $ of anyone who walked in and was treated less than everyone. Totally unimpressed.

The employee required me to take my phone. I asked why and he did not answer why

I went through all the trouble of reserving my rental on-line and uploading my drivers license. Although the rental place had my reservation number , I had to do everything else all over again. I wish I had a way to upload the pictures I took of my rental. But I'll post them on social media!

Need to let the customer know the requested equipments are not available before pick up time.

Nothing at all. This place is horrible. Don't go there. The morning guy on 9/6/messed up my order

The Uhaul truck was extremely dirty and contained used cigarettes and ashes, dirty underwear, and half empty drink bottles. The truck was obviously not cleaned before being rented out to me. Also this site did not have any of the moving supplies I reserved. The store clerk was also extremely rude and difficult to work with.

Poor customer service and the uhaul truck was dirty, needing maintenance, & no A/C