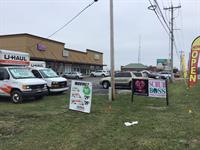 Here is the email I sent for assistance and haven't yet received a response. Hi, I rented a uHaul this weekend and both the gas and the mileage were grossly incorrect. I know I don't really have any recourse because I did not notice how low the gas was and did not compare the mileage to the sheet inside but I wanted to reach out and see what can be done. It seems like this could be easily verified by looking at the previous record for that truck (DC 5573K) Here is what happened. I rented the truck from 5330 MLK Blvd in Anderson IN 46013 and drove to my house at 631 South Broadway, 46064 , 5 miles. Then after loading I drove to 6181 N Sherman Dr, Indianapolis, IN 46220, 26 miles. When getting ready to return I went to put gas in and noticed that rather that being close to 15/16 that that uHaul said was is in it, it was at 1/4 of a tank. At that point I became aware of my mistake of not checking this at the Uhaul place. I drove the truck from 6181 N Sherman Dr, Indianapolis, IN 46220 back to Uhaul 5330 MLK Blvd in Anderson IN 46013 , another 28 miles. So I actually drove approximately 60 miles but am being charged for 180 miles plus 5 times the gas. I understand I should have checked before leaving but is there a way to see what the previous trip was logged as? It seems like I ended paying for the gas and the mileage of previous trip that did not get properly documented. I did take a photo of the gas gauge when I noticed it was at 1/4 tank and have the receipt from getting gas, but I understand these don't really prove anything. Even so, I can share those if needed. Thanks for any assistance you can provide. -Paul Stover 317-225-6262

Make sure all locations have blanket to cover furniture.

Allowed mileage was less than distance from pickup to drop-off

Salesperson was friendly and professional. Thank you for helping making our move a lot less stressful!

The extra items i reserved were unavailable. They did not have the furniture dolly or the extra pads. They did let me use the ones inside the uhaul for no fee. What's the point of a reservation if you don't have what i reserved?

Our reservation was for 9am and the gal grumpily rolled in at 9:15am and seemed annoyed that people, in addition to us, were there waiting.

This was the first time I used my phone to pick up the rental. I was confused and I watched the video on how to get my keys etc. There was a hold up with my picture because I was wearing Prescription glasses with transitions. I had to remove my glasses before I could get approval. This should be explained in a footnote etc.

Online check in did not work, had to redo it.

The lady at the desk kind of wanted to argue with me because of a mix up until she saw my confirmation. Also she told me that it was $6.99 a gallon if I didnt bring it back on half a tank. Paper work says $3.99 a gallon. My buddy had to take it back because I missed up.my back and he didnt put gas in it but it was driven 25 mile's instead of 14 (should have gotten a big truck) had to make 2 tripd

The pick up experience was horrible. U-Haul needs to make the process for phone pick up easier. Will not use again unless able to pick up from a person.

Pick up and drop off was easy, but the truck was full of salt in the back and I did not have the padding that I paid for with the rental. It ended up scratching up my dresser.

Am empty tank, a total of 1 hour and 10 minute â€œmobile verificationâ€, and a mess of personnel account confusion started off my moving day horribly. First of all, there's no way the u-haul check-in site could have differentiated me from the driver when making my reservation. I reserved the truck, but it was not me driving. Every time I typed the driver's information in, the site changed my personal information on my account, which made check in VERY difficult. The representatives called me asking for the driver because there was no way to tell us apart on the online account. The person signing up for the service is not always the driver. My next advice to you is, DO NOT USE mobile verification unless you trust your phone's data or have WiFi nearby. U-Haul should only offer this service if they'll also provide WiFi for their customers. While on the phone trying to figure out why my verification wasn't working, I could not view my browser to check the process online at the same time (my phone has data restrictions while on phone calls). It took 50 minutes to get my truck, even then, the FUEL WAS EMPTY. After making my moving team wait 50 minutes, I had only 2 hours before I had to turn the truck back in, which was not my original plan. Returning the truck was also an issue. After talking to 4 representatives for an additional 20 minutes, I finally turned the keys in just within my timeframe. What a huge mess. I will never use mobile verification again, and I'll probably avoid using U-haul again, so I don't have to live through another disaster on a moving day of all days.

The rental process was very cumbersome. I would not use U-haul again.

My experience has been poor and will never deal with a pickup location where no employees as at. Gas was not correct as they stated and app froze while checking in which has now caused me to be charged for gas when the truck was brought back with more fuel then I was left with!!

The U-HAUL was returned the evening of January 5th 2020. There was nobody there when my Daughter-in-law dropped the truck off. So she didn't have any personnel to talk to.

Store opened late and the first words we and another customer heard were â€œwe're not open for u-haul todayâ€. The trailer i reserved was no where on the lot. There was a lady there that worked thru making a new reservation for a truck that more than met our needs and thankfully i was able to contact my son to come get my truck which was already loaded with items needed moving. The truck had 3/8 tank of fuel. Gas tank had no filler cap. Engine trouble/maintenance light was on. Things worked out but we started the move about an hour late.

Not clear signage for where exactly to go. Strip mall

Returned the equipment a day early on the after hours on the u-haul app. I ended up being charged for additional mileage because i had to go out of my way 50 miles round trip to get a truck since they schedule the pickup at a location that was closed on Saturday. Also, i attempted to fill up the truck tank to 1/2 like it was when i picked it up but the fuel gauge would not come up past 1/4 tank while i was filling it even though i kept stopping every few gallons and turning on the ignition. As a result, I ended up filling the tank to full which cost me an additional $35+ My frustration is that u-haul is quick to charge for unjustified additional mileage but makes no provision to credit their customer for additional fuel returned to them. i am asking for some sort of compensation for the additional time and money spent running after a truck that was poorly coordinated by the scheduling department and a credit for the additional fuel i put in the truck.

inform them of the short trailer light connection on the trailer! although i had made a reservation on line getting the paperwork complete so I could get on the road was ridiculous using an app to take pictures of my license did not work, but rental lady was able to use her phone to do it.

They have the trucks cleaned before someone picks up the truck.

Very rude and unpleasant. I'm concerned when they REFUSE to check in the vehicle while you are there. Just a preliminary check for damage and mileage and being handed a "received" receipt would be expected for this type of business. I received a very negative attitude when requesting this during the car trailer return, so 2 days later, when returning the truck, I didn't resist when they again said "you will receive an email receipt in a few days." What concerned me is the equipment is not in their view, they were NOT busy serving ANY customers and just seemed to have an attitude towards MEN in general, not just refusing to provide proper customer service. In case the equipment disappeared before they acknowledged receiving it, I took photos with geo-location tags turned on so I could prove the truck was parked at their location and of the mileage when I returned it.

No one was there