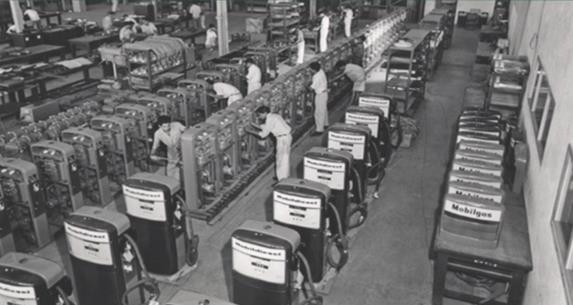 It all began in 1865, when Charles Gilbert and John Barker partnered to build the "Springfield Gas Machine" which converted raw petroleum distillates into gas vapor to light buildings. This was a solution for rural communities to light their homes with a gas lamp, if they did not have access to natural gas infrastructure. The pair also developed systems to safely distribute the lighting fuel to individual lamps.

With the electric light industry growing rapidly after Thomas Edison's invention of the light bulb, Gilbert & Barker investigated different ways petroleum could be utilized. Automobiles flourished in the U.S., but Gilbert and Barker found the refueling process inefficient and dangerous. At the time, automobile owners were hand pouring gasoline into their car's fuel tanks. Gilbert & Barker created the first petroleum pump, the T-1, in 1910. The pump used push-pull motion to siphon the gasoline from underground tanks for fueling. Within the next two years, they also introduced their first "measuring gasoline pump", and relocated to a new factory in West Springfield, Massachusetts. From Springfield, they manufactured measuring and visible pumps. After introducing the first computing pump in 1929, it was decided to combine their last names to make 'Gilbarco' their trademark.

Gilbarco also participated in World War II efforts and were contracted by the U.S. Army and Navy to produce over 100 million dollars' worth of pumping equipment. During war time manufacturing, women accounted for 40% of the Gilbarco workforce.

In 1965, their headquarters relocated to Greensboro, North Carolina. The company still continued to grow and develop with the introduction of advancements in technologies like dispensers, pay-at-the pump, electronic blending, vapor recovery, wireless payment, remote management, etc. In 2002, Gilbarco was acquired by the Danaher Corporation and merged with Veeder-Root. This merger made Gilbarco and Veeder-Root a significant player in the world petroleum products and services market. Gilbarco Veeder-Root continues to innovate to this day and works toward the development of fuel dispensers, tank gauging equipment and point of sale systems.

Energy-efficiency and waste-reduction programs at this facility provide the following estimated benefits each year for the West Springfield community: