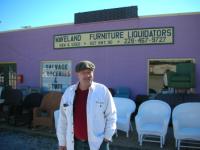 Nothing. I rent from this location all the time, and they really have their act together. This is my preferred location when I need to get a Haul, because they are so good and so easy to deal with and really know the system and their equipment well.

I was hoping to be able to review my overall experience with Uhaul, not just the pick up location. Daniel was friendly, the accessories at his location were reasonably priced, and his guys helped me get the tow dolly hooked to the truck. The problem I have is with the reservation process. I started the reservation online, and could have continued with the location I wanted from there. Towards the end of my reservation a pop-up screen came up with the message "Call and speak with our rep, discounts may be available." Naturally, I called to see if this was true, and it was. The discount was about $100. A couple of days before the move, I got a pick up location. The location was farther away and more difficult to get to from my house. After spending about 45 mins trying to find the way to change the location online, I called. The rep showed me a new location, I got a new confirmation, and was happy. I should have asked if this change would affect the original price I was quoted. When I arrived to pic up my truck, Daniel went thru everything with me and the price that I was quoted had gone up. Mind you, I did add a few items. The biggest problem was that I never received an email from Uhaul that contained the original quoted price. Uhaul had sent a number of messages asking me to check in to the location, but no price. There was a hurricane coming, movers were scheduled to arrive to my house at 1, and I didn't have a lot of time to argue. Daniel explained to me that he believed the price increase was due to the damage waiver. Maybe it was, but I know the difference in the price of the truck was about $100 alone. Unfortunately, I never got anything which could prove it. I was left with sour grapes for my lack of due diligence. All I can say is, if you call and get a great price, ask them to document it for you - or don't make changes to your order afterwards.

I think this was the best ran uhaul rental place I have ever used, and being retired military, I moved and used their services alot.

Very kind and easy to work with.

It was a pleasure working with Dan and the other staff. They were pleasant and efficient. Would highly recommend this location!

Wonderful service. No mask again but there is no mandate is Mississippi.

The windshield was very dirty on inside.

I had friendly service. I was shown how to use the equipment. People are great. The website could be more user friendly. I entered all sorts of data only to be informed the equipment was not available. I was not directed to the nearest dealer with the equipment I needed.

Not a thing it was grate service fast in and out

Make sure you have the time you need

I have rented a truck many times from this business and have always been pleased. The gentlemen that runs it and his employees are helpful, efficient, and pleasant. I appreciate kind local businesses interaction. They are a indeed an asset to our community.

Stay as professional as you are.

Dan did a great job and I highly recommend!

Dan and his staff are Awesome!!!

The trailer was very clean but the roof leaked in a few places. I know the contract says water-resistant not proof. I always just took that as the door seals not the construction. That being said they owners were great and very helpful. I doubt they even knew the trailer leaked as bad as it did.

The only problem was that I had to drive 32 miles one way to get the ONLY pick up truck available at any of the dozen u-haul locations on the MS gulf coast.

This was class service. Good people.

I rented the truck and used it for approximately 20 miles round-trip in town. Only when I stopped to put gas back in it, I grabbed the paperwork to compare what miles I used, did I see the mileage it showed on my paperwork was severely off from reality. When I returned the truck and voiced that something was wrong, I drove 20 miles max (I rented the truck and returned it in 3 hours) the guy told me that they would look into it and call the AMF?? to see what to do. The last paperwork they found on it was an outdated and the two guys that were covering since Dan had left..one told me, someone used it and it didn't get logged right and the other told me this isn't the first time this has happened. I was told someone would figure it out and call me and then I get an email receipt saying I'm being charged for 53 more miles than I drove without anyone calling me or anything. This is insane! I will be contacting the Better Business Bureau as this is unacceptable, dishonest and I'm guessing an illegal business practice.

I was extremely dismayed to learn that I would have to drive three hours round trip to retrieve my truck after having specifically requested picking up the vehicle 15 minutes from my home. I understand that trucks are in high demand this time of year, but being alerted to such a significant change 15 hours before needing the truck is absolutely unacceptable. Further, what point is there to reserving a truck more than a week in advance if the reservation isn't going to be upheld? It's essentially entrapment. I was made to believe the truck I requested would be available and then it wasn't, but at such a late time (both in the day and in terms of our moving schedule), I had no choice but to bend to U-Hual's will and poor planning/business practices. This change forced my family to drop everything, spend additional hours on the highway at night, and delay our moving schedule. Yes, we were refunded a small portion of the cost of our rental, but that ended up being a wash, since we then had to pay for additional gas. Additionally, by the time we reached the pick-up location business hours for the day had concluded, forcing us to use the mobile pick-up option, which would have been fine had the pick-up location had better cell service. Because the location was so far out of the way and had such poor reception, it took an additional hour to check in and get the keys. I will say that Kim, the customer service representative handling our "reservation", was extremely pleasant and as helpful as possible within U-Haul's system. Unfortunately, I will not be using U-Haul again, if I can avoid it.