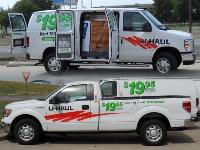 The overall experience was several disappointing. The dolly and furniture pads we requested were not in the back of the truck as expected, I called the central number to inform them and they said it would be taken care of but then it was still on my bill and when I submitted the dispute, only the movie pads were removed. Also there is no way to call the local location, it goes to the central number, so when I accidentally locked the keys in the car I had to go through multiple phone trees and was eventually told that the local store would call me and they never did. Eventually we drove to the local store since they never called but they couldn't provide any extra keys and I had to call a locksmith hours later.

I don't have any suggestions for improvement- Both staff members working the morning of 12/27/20, were AWESOME. I was expecting to be even more stressed but was not. Thanks so much to Severin for being so great!

I was extremely disappointed with the young man that I dealt with upon return. He asked me if everything went well I said no as we had a blow out on the tow bar due to the tires not being inflated properly. The roadside guys filled the tire that had not blown out as it only had 20 lbs of air and was suppose to be at 55. The roadside guys told me to tell them when i returned it that the piece that tightens the tire strap was faulty band need to be replaced, so I told the young man and he was rude telling me that I should have checked each piece and taken pictures- I wouldnt have known that there was something wrong ....he then proceeded to tell me thath they dont have to tell us how to work things and that we should know how everything is hooked up.... the chain thet was suppose to be hooked to the car had fallen and broken - i asked the guy at the install and we couldnt find anywhere to hook it up - i had no ideas that it wasnt secure so during thr trip we got out and secured it as it was dragging on the ground - so my experience droppimg off was not good. I have used this Uhaul in the past and have always had a good experience.

6X12 trailer was full of mud, had to hose it off

Everything was fine. I made my reservation and picked up the vehicle. My experience with U-Haul has always been first rate! Well done.

All the U haul staff was awesome! Thank you.

Adding a cleaning charge AFTER I've returned it, didn't even use it, literally parked it in my parking lot and drove it back the next day, put 5 miles on it... $25 being added to my bill when there was NO communication about this fee, not in my quote, not when I picked it up... Shady business. Now I don't know what you have planned next time... Maybe I shouldn't go with uhaul. I can be told one thing and have charges added after the fact for no good reason. I was gonna ask if I could get some money back since I didn't use it but I can't even attempt that as I gotta get charges off that weren't even part of the deal. Unreal. Not cool. Long time customer too....

All was good. Great staff that was knowledgeable and friendly.

Nothing - very professional and friendly!

Have rented uhaul equipment many times and always been a good experience. This time there was only 1 other party in front of me instead of a long line so I think the online check in was a little faster.

Great staff and service except for the guy I dropped it off to who should have been wearing a mask.

Please install cruise control on your vehicles. Also a diesel option would be nice.

Train your employees for customer service. I was greeted when I entered by a loud â€œWassupâ€, and had to look around to realize it was the guy behind the counter, not making any physical motions that he was trying to assist me, nor any further vocal cues of what to do. After taking my information and card, the only thing that I was told on the contract was if I went over the estimated miles I gave, I would be charged. No other information was given by the employee. None! Pretty much silent except for asking me to do things like put my card in, and sign. The truck itself seemed to have issues with it as well, but minor issues. Then upon returning the vehicle, I drove up to, but not under the return vehicle space. I saw a different employee than the one who rented the truck to me next to it on his phone. He looked at me, and I hand signaled to ask if I should pull up. He then turned his back on me and went back to his phone. INCREDIBLY RUDE! Then I pulled the truck up, exited, walked past the cell phone guy, and went inside. No employee was behind the counter, but it was barely a minute when another employee, whom I hadn't seen or interacted with, informed me that apparently the guy on his phone is the person to do truck returns. He acknowledged then ignored me when I pulled in, then let me walk past him to the store front. I was very angry at this point. Went outside and told the employee very plainly that he should've greeted me and set an expectation of what I needed to do to return the truck. NOT WATCH ME WALK BY AFTER IGNORING ME! I probably will not visit again, but if I do, I hope you take these criticisms to heart, because these are the foundations of good customer service

The man who booked our return was courteous and friendly. He was quick and accommodating. A good experience. Also a GOLD Star for him.

Everything went great, from the pick up to my extending the usage for one day to the return. These guys know what they are doing.

Certainly it is difficult for anyone to adjust side view mirrors for a potential driver. The mirrors on the truck I received were basically filled with a view of the sides of the truck. When I attempted to adjust the side view mirrors they were quite stuck in place. I did succeed. I suggest application of a lubricating spray on the mirror rotation bushings as well as rotating them to allow penetration as a step during maintenance. Thank you.

Customer service was excellent! We were in and out in a flash. A small suggestion for improvement: please wash the windshield and make sure the radio is turned off. We got quite a start when we started the van. Incredibly. loud rap music was blaring at us.

The entire experience with Uhaul was disappointing. I made my reservation online and went to one location and was treated rudely and told to go next door to another Haul. There again I was treated rudely and redirected to yet another Uhaul. I never received a text or telephone call that my trailer wasn't available at the original location. None of your employees had a personality and were just going through the motions and rude and less than helpful. It was a joke and quite sad! The speedway location did better but zero personality.

The price that you advertise in spite of a pandemic as well as the overall charges does not reflect the other charges that will be applied to the renter when a vehicle is rented you charge for renters insurance but if the vehicle is brought back with no damages you will not be the company that will give the $14 insurance back and you charge for the fuel no problem what's the environmental fee. These extra charges are the main reason I will not use this company again I will just have a friend use their car the next time.

Nothing!! Both gentlemen were awesome. Easy to work with and friendly. Eager to help. I was unable to move the mriror and Chris was right on it. Was great experience and when I next need U Haul will definitely return to this location!!