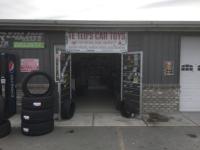 The place was fine. Not as clean as a UHaul location, but it wasn't as terrifying as people made out in the reviews. The owner didn't answer the phone the day before because "he didn't recognize our number". I do that, but as a business, you can't take that luxury. I ended up stuck with the wrong truck at the last minute. He was polite however. The location was fine. I'm not pleased with UHaul's shenanigans with our "guaranteed" truck. I selected a truck 45 minutes away for that guarantee and it wasn't available. And the woman on the phone was useless repeating the same thing repeatedly that made no sense and her discount price wasn't accurate. Not very please with our experience overall.

We were supposed to drop this truck in Prosser, WA. I then received a call that we had to return the truck to Sunnyside, WA, this caused our mileage to go over the allotted amount, that is not Teto's fault but Uhaul. It also took us out of our way to return it.

lied about truck being filled with gas, was in such a rush didn't notice is was on half a tank. Truck was dirty and the place itself was nasty. People were not wearing masks per WA public health ordinance and smoking inside the store. I would never recommend it again

Very poor experience! I was forced to drive over 110 miles to pick up and drop off the 15' UHaul truck. The company "gave" me an additional 50 mile mileage allowance BUT I had to pay the cost of the fuel to pick it up! Not acceptable. Then when I didn't fill the tank to exactly the line on the fuel gauge, they had the nerve to ding me an additional $10+! Not acceptable.

Felt VERY unsafe, equipment being rented out of a sketchy audio buisness/taco joint . Fortunately I was well armed, but it still left me very uneasy: I would never want to return to this area again. The equipment was stored in an overgrown field that I was required to drive through to pick up, but before I could even do that, private vehicles had to be moved to gain access. The whole experience felt like a shady drug deal/illegal activity.

Thank you, the service I received was great!

Have availability in desired location.

That person is not friendly and doesn't care nothing and we have a problem with that gas he give me the track empty.

Very happy that Bob Stalcup understood that the additional miles we put on the vehicle were due to U-Haul changing the dropoff location and reversed the charges. Appreciate it!

The office was closed when it was time to pick up my truck, I ordered three types of dollies I only got one, old and hard to operate. This location can be improve in so many ways.

Online and on door it says it opens at 10 am. The open sign was on but no one showed till 10:30am. Called customer service and talked to a lady to see if we could drop off without paying the extra fee. Then the guy showed up and said he doesnt open till 10:30 and he personally doesnt charge the after hours fee. Alot of BS from both branches.

He helped get me all connected up, gave me directions to get out of town easily, and was kind.

My original Drop location, as selected from the U Haul site stopped accepting U Haul on 7/1. They would not accept the truck. I had to take the truck to another location 1 hour away. The new drop location was in an area of Sunny-side where all the doors and windows had bars. Also the Phone app sucked. After completing the step by step process I got a message that the transaction reported and error. I had to re-do the entry 3 times. After 45 minutes I called customer service and was told that the original transaction submit was accepted. totally a PITA.

Very friendly and quick service. Much quicker than a U-haul terminal.

My experience with uhaul was less than pleasing. I was told that my reservation was approved and a truck would be there by my moving day and then the day before I was told there were no trucks and I had to drive 40 miles with a way larger truck than I was expecting. And the truck had two flat tires and it was extremely hard to drive. The uhaul employees at Sunnyside were nice and helpful, I had no problem with them. but I was charged more than original, even thought the employee on the phone told me I'd get the same price with more miles. It was just a frustrating experience on top of moving stresses.

First I was charged the insurance fee of $25 when I clearly marked the box NO, manager WOULD NOT remove the charge, told me to take it up with drop off site who of course said they could not and it should have been done at time of pick up! Guy showed up 20 minutes late to pick up. NOT HAPPY

This location was the worst! Please audit Sunnyside Washington Uhaul location. He tries to make customers pay â€œgas feesâ€ under the table and was trying to charge double the quoted rental price! Never coming to this location again.

What I would recommend it's when I booked a truck and car hauler dolly did they be in one location I had to go quite a ways out of my way to get the dolly and the truck and then go back to where I needed to be Also I did not receive proper emails for confirmation payment that I could print off( that I needed for my taxes. ) ??

Owner/adult was not there, only his 12 year old son. Had to wait 30 minutes for him to arrive.

I asked for an appliance hand cart, got charged for it and only got the standard hand cart. Not the fault of this location, but the people I spoke with on the phone still charged me for the more expensive hand cart. They never called me back to let me know what I wanted wasn't available.