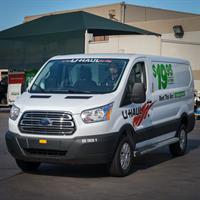 Allow the location to deal with the rental AND returns. The app did not work correctly when returning the vehicle and after a long day of moving I wasted 1/2 hour trying to return it. I was not happy. On a better note the people that I did the rental with at the location were very kind and accommodating. Thank you to them!

Place was fine even though I checked in and they still charged me late fee. Called and woman said I would get it back a manager would reach out. Manager reached out and told me too bad. I wasn't late and have to bring my own jack just to get the thing hooked up wasting an hour of my time. Hate uhaul.

Hi - I would rate the location higher if they had followed the order. When we ordered, we asked and submitted to pay for additional add ons. NONE were included - and there wasn't even a dolly on the truck. Disappointing.

I had a reservation for 215 I got there for 145 and I was told that my 20 foot truck won't be available reminding you that i already drove 30 minutes to pick the truck from that location. So i did rent a 15foot truck which it didn't do the job that i wanted for and now i had to hire a private driver to help me out and payed another extra $100 . So If you don't know that you will have that truck available then why you do the reservation ?! I like to speak to a manager please.

People are nice they helped me hookup the trailer and accomodated my concern. I will definietly recommend this uhaul location.

She was on the phone whole time tryin to take of me! Also talkin with two other people in the room was very rude couldn't hear half of what she was sayin because other people talkin in room as well

Sue was amazing to work with and made the experience so pleasant.

The process took close to 2 hours to pick up the truck. The online process is dreadful. We waited in the parking lot near the truck. It was very stressful. I attempted to call for assistance and was provided a video via text which was already available on the web. Overall, it was a very poor and stressful renting process

Accidentally clicked the 24/7 pick up online option and was offered no assistance when we got to this location. It would have gone much quicker if we had help and didn't have to keep going back to ask questions. All in all the staff were nice, however we wished we had more help.

The location is a mess but service and process was fine

The rental site is ok. Is you guys as a company who suck. You are not honest with your charges. I will never rent again with you guys.

Garage was dirty nobody wearing masks didn't even get a receipt the woman was too busy nailing license plates up on the wall told me I would get it via email instead later that day. Truck was clean and ran well and Italy which appears to have

There was no help at the time I returned the truck. It was my first time using uhaul. The gas station owner told me "you have to do it yourself" with no explanation at all. When dropped the keys and left I called uhaul to ensure I was all set and they told me I had to return to the location and do the return from my phone while in there. I was several miles away. Totally bad experience. The truck was filthy.

Went there to pick up my auto transport. When I arrived I was told to go back up the truck and do it myself. Then when I asked, since it was a very small gas station and I already had a 20ft U-haul truck, how was I going to get my car onto the transport I was told to "Go find a big lot and do it". I had to keep protesting that I was not attaching the auto transport myself to the uhaul truck that I had to rent and drive to another location to get the auto-transport. Then I was informed well they could do it but "there would be a fee if I wanted the workers at this location to attach my auto-transport to the uhaul" I had to protest again and tell them that they needed to attach it because how would I know if I did it correctly and that it was safe. I was driving almost 500 miles to Buffalo, NY. This location was awful to deal with and I would never recommend anyone to go there. The fact that they clearly knew I was correct that they had to hook-up the transport but they did not want to go out into the drizzle to do so was ridiculous. Even to the point they only offered to do it but I had to pay them extra!!

The gas station was small, cramped and not very clean. The personnel were friendly. Overall, however, the place did not yield a good first impression.

Small family owned gas station...thay did everything they could to get me on the road .. yes i liked them.

Vehicle was not ready. Paid almost three times what I anticipated.