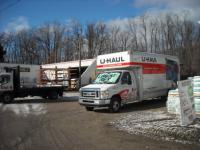 When we returned the truck our phone would not give you our location ....we called in and were told you have to go to the chrome menu and allow it to find your location..

Everything was good don't change a thing.. thank you so much!!

They were closed. We parked locked and dropped the keys off in the box. Very easy.

The 24/7 service is terrible- I did not have contact with the physical place. Everything was online and it was bad. Someone from the lumber did make an effort to get the missing dolly, but it was unavailable. Steiner Lumber did a good job- the 24/7 service was terrible.

Where I pickup vehicle they were great, very helpful, the procedure of u- haul was hard to follow, I called u-haul days before, I thought everything was taken care of before I got their. And I've used u-haul vehicle before and that was easier. But the people at Steiner lumber had truck ready dolly everything for me.

I did everything online. When I got there I had to do it again and again. It took 45 minutes. I won't go back.

The location & employees at location was great. However I did everything on line the night before but the system did not work right & would not work for the man at the counter. I did not get a code to receive the key. I was to pick up at 9 am. Got out at 9:30. Then returning it the system again did not work right & it took another half an hour to return. There needs to be a better system for this process. This took way more time then it ever should have & it was all the computer. The man at the location was doing it right & the agent he had to call still had a difficult time getting it to work. Such a shame.

Did the self drop off as was closed.

Nothing. Easy to find. Easy to pull out.

Call the customer before changing pick up location. We were scheduled to pick up 8 miles from home but had to drive 45 minutes away due to a reschedule. If uhaul would have called me to change that I'm sure there could have been a more convenient pick up location for us.

The people at Steiner Lumber were absolutely fantastic. We have never had a better experience with Uhaul ever. I commend Steiner Lumber for having such friendly and super kind people to do your service. ??????????

The original booking information all said an address of Millersburg, OH on it. I believed that the pick up would indeed be in that town. The text that was sent out came in very late in the afternoon, & by the time we saw it, the phone # listed was closed for the day. We didn't notice the address right away on the text, and still went to Millersburg to pick up on the scheduled day. That's when we were told that the trailer was in Shreve, OH. Everything was delayed due to the confusion. Everyone at Steiner was great, we just felt the communication about where the trailer was to be picked up wasn't super clear. This put us behind for the rest of the day....it wasn't the end of the world, just inconvenient.

I was unfairly unjust and extremely over charged for dropping of here. I will never use uhaul again. They will be meeting my attorney.

Customer Service was friendly and didn't take long to get on our way! Will definitely use again if the need arises.

It was a smooth and painless transaction!

There does not seem to be anywhere to evaluate U-Haul itself, so here is some feedback. 1- you should not offer/accept transaction for a trailer rental size you don't have at the place of pick-up. I ordered the 5x8 and when I went to pick up, you made me take a 6x12, which was way to big for my usage. 2- it accepted me dropping off at one location, but you made me drop off at another location once final paperwork completed. So overall- you make the customer do things that are not revealed up front at time of reservation.

Made a reservation at one place. Went to get it, but it wasnt there they didnt have any. Called uhaul they was very rude. They moved my pick up place to another town. When we got there they didnt gave my truck either had to get one 3 times the size i needed. I called many times and EVERY SINGLE OPERATOR was rude. I will never use u haul again. I am so behond uhappy with them.

Rain leaked off of slide up door which posed a problem.

Great place to rent from !

The van I rented was the biggest gas guzzler I ever drove It had no power.I would not rent this for long distance or driving in mountains or big hills.I did not like renting a vehicle with no insurance if you are in a accident uhaul holds you responsible no matter who was at fault.make sure you take pictures of all the dents& scratches before you drive it .

Wish the enclosed trailers would be just a little taller. Easier to stand and room for queen bedding to slide in. Other than that it was great

Great people-friendly, fast and efficient! The truck and auto carrier were both clean and ready to go before I arrived. I highly recommend them.

I have rented from Steiner Lumber on several occasions and several different trailers and dolleys. They are friendly and knowledgeable.