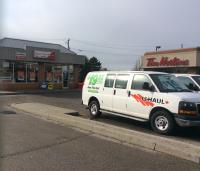 Can't complain. He tried his best and he did it well. Thank you.

This locations is awful! The guys working at the mart are very rude, we received a terrible customer service!! We paid for furniture pads and they said they didn't have any there and when we asked for a refund they completely ignore us. Really really bad experience at this location! If i knew i would have easily gone to the warden location, so please to avoid other customers horrible experience just remove this location! Daisy mart CAN'T do this job!!!

The truck stinks. It really stinks. I got it from a dealer called Daisy Mart on Birchmount/Ellesmere. I should have gone to Warden/Hway 401

The vehicle has dirty. Garbage left in the van. The state of the cargo area was unacceptable.

Unclean & made life harder than it needed to be

my pick up location was changed 15 minutes before pickup time. Online check-in gave me trouble.

The vehicle was not very clean. The rear right tire was low and the warning light was on. The people at the pick up location were aware of this but failed to tell me so. When l returned the vehicle, the person at the location was verbally abusive, unprofessional and abrasive. I called him out on his behaviour and he became even more abusive and he yelled at me to 'get out of his store'. When l attempted to leave, he briefly locked the doors electronically, as a show of force, before unlocking the doors. I demand a written apology from this service provider for his shoddy service. I am a paying customer and should be treated as such.

The cab of the van we rented was filthy. There was mud everywhere as well as garbage in the cup holders, empty coffee cups in the door and multiple water bottles under the seats. I will not be using this location again.

Staff had no idea how to check me in and told me the owner wouldn't be in for a couple of hours. I had an elevator booked. Then they kept me waiting while the owner processed my check in. It took too long.

This is a daisy mart so equipment maintenance is not their responsibility. The van I rented has 21k on it and the ABS warning light is on. Uhaul had a very bad reputation in the past for having wrecks on the road. Let's not see this happen again. Get the vehicle to one of you major centres and get it fixed.

The couple running the store gave me superb customer service. I would rent from there again. Thanks

The person in charge did not have any equipment to clean the vehicle;it is winter and it was snowing. The vehicle was covered in snow and he offered no assistance even when asked. He was multitasking upon my initial arrival so I had to wait. Upon returning the vehicle early and returning the key, I was informed that his wife left with his phone which he needed to confirm I returned so I would have to wait 15 minutes. He then signed the paper stating the date and time I returned the vehicle upon my request so I could leave. I left my cell at home and upon arriving home I saw numerous, repeated missed calls, along with multiple voicemails telling me I did not give him the key and threatening that I would be charged for it because it means I still have possession of the vehicle. I did however return the key to his hand and parked the vehicle which he looked out and saw. He then called me again accusing me of keeping the key and telling me I was wrong and I never gave it to him. I was very appalled and felt very disrespected. I never received an email receipt as he promised I would and called an hour later to enquire. I asked him he found the key and he then hurriedly stated he found it where he had misplaced it. There was no apology and I still have not received a receipt in my email. The service was horrendous and insulting.

For a customer who's booked a vehicle at 09:00 am, to head down and see the vehicle is covered with snow, and no snow brush and ice scraper either is quite a horrible experience. Considering that the booking was done for a purpose, the time wasted in just Beijing it to the notice of the owner that the van is covered with snow and to have him waste more time in getting it cleaned, didn't help the cause.

Poor service,they forgot to check me out

Daisy Mart staff is extremely rude (except for the young boy). Their only concern is attending customers for Daisy Mart- If you are a U-haul customer they expect you to have and known everything- and provide no help- they even made snark comments towards me for not knowing. I called about 5 times to this location for help and got the phone hung up on me with the words shouted "IM BUSY NOW OKAY BUDDY". When returning the vehicle a lady who claimed to be the "owner" approached me and gave me the nastiest most condescending attitude for no reason whatsoever. After arguing with her inside the store- she later than switched to speaking Hindi with her employee and speaking nasty words about me that I will not write here (I speak Hindi myself). As a first time customer who spent a large amount of money on renting a van from U-Haul I can say my experience at this location would be rated a 1/10. Aware that U-Haul is not represented by the employees of Daisy Mart- I definitely would never use U-Haul ever again- but speaking over the phone to real U-Haul employees was a great pleasure, and I always received amazing customer support, which is why I would continue using U-Haul but through a new location- never will I step foot again to get a van from Daisy Mart- even if it was free.

When I returned the vehicle, the employee who was doing the check in had not been completely trained (this is a Daisy Mart) and said that the machine was broken. I waited ten minutes while he fiddled with it. Finally an experience employee came in and showed the original person what he was doing wrong. I do not foresee a problem with that employee again.

By far the worst experience I have ever had renting a moving van. Will certainly avoid U-haul in the future.

Van was good, no complaints, but we did get charged $15.00 coverage fee without being asked when we picked up van, when we returned it the person was very busy behind the counter with other customers and charged & billed us for this, we were not asked beforehand at all - not happy about this as this is the 2nd time in 2 weeks we have rented from UHaul, probably will go with another company next time as I emailed UHaul about this and no one ever got back to me, not very good customer service.

The van is very dirt inside