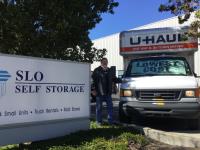 They closed at noon when they were meant to be open til five so I wasn't able to speak to anyone about the issues I had or charges.

We should have been informed that the location closes for lunch. We returned the truck early (12 p.m.) but office was closed. We used the key drop box but why would you not have office staffed all day?

I received good service and was happy with my experience at U-haul.

I expected to be done with the truck at 4 but didn't get it back until 4:50. The rental place closed early so I dropped the keys off in the drop box. Found out the next day that they charged me for an addition day. As for the truck, it's unfortunate that the dolly and blankets can't be moved as they were in my way when trying to load the truck.

I am a devoted return customer of SLO Self Storage. The Hales operate an efficient, professional and friendly operation. Happy to be back at this location!

Chairs for customers so filthy I would not sit in them. Office area needs a good cleaning.

Managers Stan and Jill Hale are the most unprofessional people I have ever met. They out of spite would never confirm the reservation with me until 8 AM the day of pick up on Saturday . First of all I made the reservation the first week of October with morro Bay U-Haul Gilbert is his name and he was also very unprofessional and told me when I went down there on 10-29 he doesn't have the truck that there would be another truck and didn't know the location and walked away from me very rudely as well. I was scared that I was not going to have a truck for all the week. Than U-Haul sent me a text saying there would be a truck in San Luis on Prodo and the manager said no there was not one available. Than U-Haul sent me another text that sent me to Slo Storage to Jill and Stan Hale. Jill called 10-29 and confirmed for November 1 than I called back and spoke with Stan and he said it was fine I pick it up on November 2 and he said no Problem and he said he would even change it in the computer. On 10-30 I got the rudest call from Jill Hale said I sabotaged her going behind her back and talking with her husband first of all I didn't even know it was her husband second of all that was very unprofessional she was yelling at me and threatening me that I wouldn't have a truck . I called U-Haul and explained to the representative how rudely I was treated and they told me that they would call them they did and called me back and said to confirm it with her again which I did and she would not tell me that the truck would be there. I didn't know what to do worried I wasn't going to have a truck called U-Haul representative and they said they would call her and they did on 10-31 and said it would be fine . Worried because the way I was treated by her I called on November 1 in the afternoon and she told me that she doesn't know where the truck was and I wouldn't know until the morning I pick it up on November 2 At 800 am! Had to call the representative of U-Haul back and he tracked it for me and the truck was sitting there. In other words she made me feel terrible and frightened on purpose because of her unprofessional ruthless attitude. The people helping me move could not believe how I was treated plus they came from very far away to help me. On 10 3119 I was offered a $50 credit from your U-Haul rep for my terrible experience and I would like to be refunded that money also I would like to have a formal complaint done on Jill Hail on the way she has treated me and I'm sure treats many of your customers with her hateful attitude. I hope this doesn't happen to any other person trying to move and having additional stress with a U-Haul company like this. Thank you

When I arrived no one there. I had to wait almost an hour for man to come back from lunch . But when he got there he was a very nice person.

The people working there were great. I use them every time.

The staff was very helpful, quick and efficient. Really impressed, would rent from here again for sure.

The personel at pick up were extremely helpful.

Quick, Honest, Friendly, Professional service. Compared to other U-Haul stations in town this one is the best imo.

I did the entire process online and the experience was flawless.

Nothing! These folks are fantastic-have Rented from them more than once and spread the word how terrific they are to deal with.

Have a truck that does not have a fuel leak! Have the size of truck that I ordered two weeks in advance! FAIL!

Quick service for what my company needed at the last moment! Thank you!!

Truck was just about new! Thanks as always for your courteous and professional customer service.