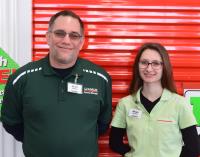 They change my location

The help was timely and everyone was great will do business again.

Total nightmare in dealing with UHaul to locate a trailer. Our reservation was not honored and we had to find an alternative. We finally did, it the trailer was bigger than we needed and double the cost. It wasn't a one way - which we needed - so not only did we have to pay a lot more, we had to cut our trip short to return the trailer. Your reservation process - that relies on people keeping their â€œreturnâ€ commitment, sucks!

Drop off was only easy because I saw a staff member who told me to drop off keys in the box. I never found the bar code to scan.

Eric did an awesome job! Very pleasant experience. Thanks.

I was doing the contactless pickup by my mobile device. I zoom ended up having to go inside because the keys were moot in the pick up box. When I had asked the unpleasant employees I was first told, well iclosed last night and you were picking it up when we were open. Then when I asked what's the point of doing the mobile contactless pick up the employee just says...oh ya. And three unpleasant employee hours back to doing whatever he was working on. No sorry or anything. Then as I was leaving the counter the next customer vibes up needing propane. The Dane unpleasant employee tells the customer that it would be 10-15 minutes before he could help him. (But there was angry employee working)

My reservation time was not honored. I didn't get my vehicle until 1.5 hours past the reservation time. By the time I loaded my vehicle and arrived at my destination, it was closed - it had closed 3 minutes before I arrived. The entire trip, fees and gas were a complete waste.

Not over charge customers. Be more organized

The vehicle was inoperably safely. No one drove it befkre i remted it to see if it was mechanically operational. No one in the UHaul Org has made this right with me. The whole experience was an exhausting waste of time.

When I arrived the entrance was not marked and did not have lights, once i was in the building it took me an hour to get the truck at which time I was told to go get my truck and that it was around back. I walked around back where I had to pull out my phone because there were no lights. I was not shown my truck by any employees and had to inspect it by phone light. The next day I received numerous calls from the uhaul location because they did not properly setup my rental contract. whenever I called back I was routed to customer service and not the actual store location, and whenever I asked I was tld I could not be transferred to the branch. customer service said that my contract was not opened up. I called into customer service numerous times, each time having to wait 20+ minutes to speak with a representative. When I dropped off my truck the contract was still not opened, but the next day I saw I was charged on the card I provided to the branch location, and to the card I used to make the reservation. when I called about the double charge I was told i was not charged. I just received another email showing that I was charged an additional $95 dollars without explanation

you mean it can get better than this? Super excellent customer service. Very Very pleased. Hats off to guys.

Please charge & bill only for the time from pickup to return. I had to challenge the bill before u haul employee would correct bill to reflect actual time I had possession of your property.

I've never had an experience like what we experienced. The vehicle soon after we picked it up put on the tire indicator light saying low tire. So we pulled over saw it was low filled it up and tried to make it home. A three hour tour turned into an 8 hour tour because you're insurance that we paid for gave us a window of an hour and a half for the roadside service to come and help us didn't bring a tire with a rim because he found out that the stem on the tire was messed up. So no we are not happy thank you

Easy to reserve on line. Pick was fast and easy

The customer service needs improvement. I was not charged properly the first time and had to complete two transactions. We were shown to the tow dolly, but then left standing in the parking lot while the employee walked away. I had to ask where I was to get my rental truck. He pointed to a row of trucks and indicated mine was on the left and turned around and walked away.

The cab of the truck reeked of marijuana and in the box bed of the truck I found dirt and leaf remnants of marijuana. Also, the manager of the location allotted me 60 extra miles on my contract that was not applied to my final bill and the charge for the little tiny hand truck should have been $10.00 not $21.00!

I just want to say in a trying and stressful time that the staff at this location have been more than kind and accommodating to my situation. They made and extreme stressful few weeks a little easier by not only their kindness but their help as well. I want to give special comment on Darren who helped me from Truck rental, to storage rental, to transferring storage units a smooth transition all the way. I also want to give special comment about Eric who helped me as well a few weeks ago.. again he made a difficult situation better. I can't speak highly enough about the friendliness of all the staff I encountered in my comings and goings. Thank you.

Windshield was not cleaned and truck reeked of marijuana. I called and complained. I was told they would swap trucks but mine was already loaded with furniture. When i returned it two days later still smelling the person at uhaul said, "it's that time of year." That's unacceptable. The truck should have been cleaned better or put out of commission untill it didn't reek. Also there was no one in main office when i picked up truck and it took forever for someone to come in to help us. They are friendly there but not too professional.

The staff was rude and we were an hour late dropping off the equipment and they charged me for an entire extra day. I've used U-Haul many times and have never met such un-accommodation. Will be avoiding U-Haul in Lithuania if this is the policy.