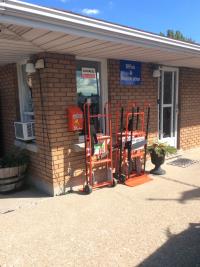 Reservation was a nightmare. Pick up location changed via phone call 45 min before pick up resulting in a longer drive to pick up equipment. Drop off location was attempted to be changed from our selected site by customer service but we refused as it would have resulted in a 35 km drive to the drop off location when the original drop off location was minutes from our move site. Drop off location personnel didn't even leave building to assist with trailer disconnect , told to â€œjust park it over there.â€ Only redemption came in the form of a $50 refund following a lengthy compliant email sent to customer service citing default on reservation guarantee that came with a same day apologetic response.

The vehicle had an engine light on. We had to risk loading everything and getting stuck or stranded. Then delaying everything in the event of needing roadside assistance. I had my movers for specific times. I wasnt satisfied leaving with an uncertain vehicle. Also, i find it down right dirty and low that i booked a vehicle in Fort Erie and you provided one (conveniently the only one within many kilometres, yes i called about it) over 30 minutes away while still charging me kilometres.... Thats disgusting and i will be sure to tell anyone i speak to about it how you purposely made me pay for extra kilometers. Theres no reason someone couldn't have delivered that truck to a fort erie location or you could've done something about my milage charges. You had me over a barrel and you knew it and proceeded to take advantage because of that. im utterly disgusted!!!

Great guy that help me will always go back "Thank you "

Everything was waiting Fast service both ends

The online payment portal was problematic but rental agent handled it very well.

Have a truck at the proper location and time, treat customers with respect and improve communication/availability for contact.

Inside of the truck was dirty. I had to completely sweep it out on my own.

This whole experience renting a truck this time( and I have rented many times) it has been a nightmare. First off I asked to pick up the truck one minute from my house on Kent avenue. I get an email days later telling me that I have to pick it up in port Colborne which is a 50min drive from my house each way. I had to struggle to find a ride there. Who is paying my gas and mileage?? I had called uhaul to try to rectify this and the lady on the other was extremely rude told me she would give me 100 km free and twenty dollars (I have two vehicles driving from port Colborne now costing me gas money) so I said to the lady that it isn't fair she said rudely that's what I'm doing and then she hung up on me!!! This is the most inconvenience that U-Haul has put me through. I was under a huge amount of stress that day from picking up the vehicle it put me two hours behind because Kent avenue is a minute from my house and opens at seven and the location I had to pick it up from was not open until nine and the almost two hour drive I had. And the truck as filthy inside the cabin and more so in the back of the truck empty water bottles left behind and used tissue I'm appalled. I rent trucks from you all the time and never had this terrible experience.

I recommend Toronto drop off at the Junction depot. There's plenty of room and service was great.

It's run out of a shady motel. There was no secure area to do business, people were coming and going.

Would like to know that you can't use debit before hand.

I was charged for extra fuel even though I returned the truck with 1/8 of a tank more than what it came with. I had to complain in order to have the charge reversed - although my complaint was handled very promptly and professionally!

We were charged a wrong location dropoff fee for no reason

I was charged a wrong location fee for no reason.

Very clean. Was In and our of there in no time.

The man I dealt with didn't understand the terms of the one way rental (i.e., that there was no charge per kilometer). He didn't consider my complaint about the leak in the truck nor my report that one bag of packing blankets was not opened/used. The parking lot was covered in ice; very dangerous.

This man was very unfriendly, no customer skills, no appreciation, no manners, his customer service was terrible. The truck was covered in snow. He tried to charge me twice. I would never use this Location again.

First Van oil pressure light was on and when we checked oil it was extremely low to nothing on the stick. Trying to get another van we had to wait for agent to call supervisor and that person wanted us to go to another location out of our way to pick up a van, finally rented us another van that was on lot even though they told us there was a problem with that vehicle too which was not true, though we insisted, we checked vehicle over and it appeared to have no problems, it did obviously have an exhaust, fuel issue as there was an odor of rotten eggs while driving, we had to drive with Windows down. Our move was delayed by a hour due to problem with first Van. We did not have van for 8 hours. Time on contract/ receipt was also incorrect. These vehicles need better maintenance, including rear tires, not a lot of tread left. Back had not been swept out/ cleaned. The agent was polite, we know that these issues were not his fault.

When I made my reservation I was to pick the truck up in St. Catharines where I live. Two days before my rental I was told I had to pick it up in Port Colborne 37 kilometers away. I had to pay a friend $40 to take me there. Then had to pay $20 in gas to get it back to the level it was when I picked it up

Nothing worked out very well

We didn't pick the location our preference was something closer to our home Truck ran fine. Interior was dirty and back pad lock was broken Agent/vendor at location was friendly & courteous

Went into office which and noone was at the desk. Rang the bell and noone came out of what seems like a live in suite. We had to get the cleaning staff to find the owner and he did not seem enthused to assist us.

Nothing, very satisfied with my experience.