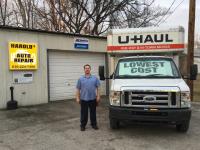 Extra mikes were a scam, I drive one way from pick up point to my house, loaded . Drove to New home 3 hr trip, 1 stop for gas then to drop off and was told I drove over by 176 mikes. Not true, mileage was wrong somewhere and I was charged overage for 71 dollars. Not impressed.

Harold goes above and beyond to help and assist his customers. He hooked up my trailer and made sure everything was working properly. Always very friendly and courteous! Would highly recommend him!

He probably could use a few more trailers like I rented. Very nice man running his business.

People were very nice and accommodating but no one was answering the phone and owner was an hour late getting our truck and was not prepared for us to take it even though it was reserved for a few days. Could have been a bad day for them but was very inconvenient and poorly orchestrated.

Have the equipment ready for pickup at the time the customer needs it. We were supposed to get our trailer by 3 instead it took you 50 min to get me my trailer. Never will I go back to your place for a uhaul.

The A.C. in the truck didn't work and made the move miserable. The lady that took my reservations on the phone had a terrible attitude and uhaul didn't honor my reservations request times.

I was charged an extra 53$ on top of my 89 and told it was late which it was not it was dropped off and the key was on the desk and the appropriate time .

I dropped off EARLY 45 minutes early. A man named AC told me to throw the keys in the box. I did. Then I called customer care and they said oh your supposed to be moving to Imperial. I said no I know where I'm moving and it's Pevely the rep keyed it in wrong. Oh, we will call so it's not reported stolen. We will call you back. No cal so I called again, she said sorry my computer is down. So several hours passed and my card was charged when I called the third time I spoke to Akeen and explained I dropped it off early. He said if you go over one minute they charge you. I said yes I understand that but I dropped off early With a full tank. He was condensending to me and said let me explain this one more time. I don't like being spoken to like I am a dummy. He said he would take the charge of being late (which I was not!! He took it off but yet to see my cash go back in my account) Harold's auto Services did not key it into the computer till 140pm I am very upset over this service

Everything was as promised

Truck was dirty. Also there is no place to park the uhaul when returning it. The owner tried telling me I didn't put enough gas in it when I did. Horrible experience. Waited almost 30 minutes to check out a uhaul. Would like my money back really

Harold's was dirty and the Internet was not working properly, so he had to call and I was not explained how to return and the procedures that it involves.

The owner wasnt very nice when i dropped the uhaul off was short and seemed inconvienced i was even there. The pick up was forever the man didnt know what he was doing was a very nice guy but was not trained the owner who knew how to do the pick up process had left and wouldnt be back for hours which was past my reservation time. Overall this location was nkt professional and i wasted more time trying to pick the Uhaul up and dropp it off then i should have.

There was nobody there to process my pickup even though I arrived during business hours. I waited 1 hour for someone to process me and even then it wasn't what was reserved amd I never received paperwork for the rental.

Harold's Auto repair has been my go to for few on auto maintenance. He so conveniently also rents U-Haul's. Great experience and great person to work with.

I was charged for 3 days of use and only used the trailer 1 day. the trailer was returned the same day as I rented it per my original reservation and today I get charged for 3 days of use. my guess is no one came in over the holiday weekend to see what was turned in and they just assumed I had it for multiple days. I need the 2 non authorized days of charges refunded asap.

I wouldn't recommend uhaul to anyone Now comes the BBB complaint

You can explain everything that you are going to charge someone. You all only told us we would be charged for the uhaul and the miles we used. Instead you charged us for the miles we used, you charged us for 2 days when we only had the uhaul for 12 hours, you charged us for gas (never told us we would be charged for that), you charged us for a dolly that we never used. Oh yeah and inside the truck it says if you sweep it out and clean it up then you would get $20 off LIES!!! We cleaned the whole back of the box truck out and even cleaned the front up (even though we didn't make a mess in the back or the front). This company is a total JOKE. I will never recommend them to anyone EVER!!! I even called to speak to them about my experience and the people who work in there customer service hung up on me everytime I would tell them what happened. I called and told them I wanted to speak to a manager (or someone in charge) they refused to let me speak to anyone above them. YOUR COMPANY AND YOUR CUSTOMER SERVICE IS HORRIBLE!!! I never would have used this company if I knew I was going to be charged my whole paycheck for 12 hours of your service. Now I cant afford to get my child diapers, formula, food, and all his other needs because you all decided to basically ROB me. SAD JUST SAD AND THEY COULD CARELESS!!! Sorry for the long Rant but I am so upset over this.

harold did a great job would rent from him again

Excellent customer service. Will use again. No problems at all.

Harold is a fine man. You picked a winner in this location. Chuck Buban

Not organized at all, pricing was different than what I was told it would be when I reserved online.